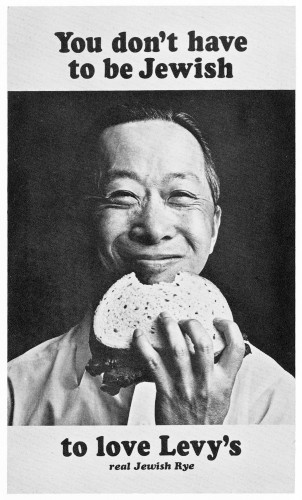 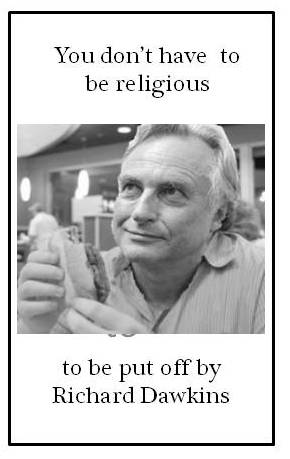 Quite apart from any offense that might be taken by a believer, proselytizing, especially about atheism, just doesn’t seem to be good form.  Plus, since Dawkins comes across as a snooty academic, his testimony can be considered wanting relative to the foxhole test, as in the old saying “there are no atheists in foxholes”.

It could be that there is some genetic explanation for the tendency to religious belief.  And whether a tilt has been hard wired in or not, life’s vast uncertainties and more than occasional inexplicable brutalities are a nice backdrop for the occasion to believe.  Such brutalities might cause one individual–in a foxhole, say–to suddenly believe.  More likely, they just form an essential part of the niche to which humans have had to adapt.

If you are going to accept an atheist’s testimony, it will feel more authentic if there is at least some trial by fire, some hard event which will put the atheist’s beliefs (because they are beliefs, not just non-beliefs) to the test.

So if you want to see a very dramatic example of this, go to Netflix Streaming and watch Touching the Void.  It is a 2003 documentary on a disastrous mountain climbing expedition in the Peruvian Andes in 1985.  Two British climbers–Joe Simpson and Simon Yates–made the attempt.  The film mixes narration by the two climbers with recreated footage using actors doing the climbing.

The duo made it to the top but on the way down found themselves enveloped in a blinding snowstorm.  Simpson was out in front, tethered to Yates by a rope.  Yates, who could neither see nor communicate with Simpson, would only move periodically, setting himself firmly in place to allow for Simpson to advance.

Suddenly, Simpson falls through and is left dangling in mid-air.  There’s a void to touch, for sure, but it is only the beginning of voids in the fim, both real and metaphorical.

Yates cannot fully tell what has happened and finds himself unable to reel Simpson back in.  After what must have been a very anguished set of calculations under difficult conditions, Yates opts to cut Simpson loose.  This alone would have been a tough moral/religious question worthy of the price of admission, but as it turns out, the religious burden in the film is borne less by Yates than by Simpson, who has fallen deep into a crevasse, deep enough to preclude climbing out but hardly at the bottom.  He’s broken his leg badly in the fall and is barely mobile.

Simpson rouses himself in the crevasse, calling for Yates.  More than three times, no doubt, before he concludes he’s alone, forsaken.  He cannot climb out and below him the abyss yawns, a dark, cold unfathomable hole.  Now that’s a foxhole for ya, and a first-class void!

What is he to do?  Will he die?  Will he pray?  Simpson was raised a Catholic but had long been a non-believer.  In fact, he had wondered in the past whether his lack of traditional belief would survive the kind of test in which he now finds himself.

What he does, how he does it, how he reasons it through, how he summons the courage to act in the face of near-certain doom . . . well, for me watching it was nothing short of a profound experience, all the more so for being true.  The abyss Simpson contemplates did not have to be thought up by a screenwriter as a metaphor.  It is scarier just being real–cold, inert and, though no fault of its own, unforgiving.

See the movie.  It really is worth it.  If you can’t spare the 106 minutes, go to Netflix and find the exact mid-point–53 minutes–and you will hear Simpson recount what went through his head.  Or you can watch this 10 minute or so YouTube excerpt.  The film is based on a book by the same title by Simpson, which is also available.

You don’t have to be an atheist to respect Simpson’s conclusions, to say nothing of his courage and determination.

Fast friendships mix with fear in the foxhole,

That fiery flash of insight can be fickle,

Gainfully employed for thirty years, including as one of those high paid college administrators faculty complain about. Earned Ph.D. late in life and converted to the faculty side. Those damn administrators are ruining everything.
View all posts by Fenster →
This entry was posted in Movies, Philosophy and Religion. Bookmark the permalink.

8 Responses to Touching the Void