A Walk Down Bedford Ave.

I wrote here about a walk down Moody Street in Waltham, Massachusetts, a half-mile slice of interesting grit and glamour–mostly grit–in the otherwise upscale suburbs west of Boston.  It was night time at 5 PM near the shortest day of the year and what jumped out at the casual stroller were the lively scenes unfolding in the brightly lit tableaux as the lights spilled out from large old-fashioned windowed storefronts.

Fenster recently perambulated down a stretch of road in Brooklyn that is in some ways similar in length, attitude and affect.  It was Bedford Ave. in ohsotrendy Williamsburg, walked not at the end of the day in winter but in the early morning, before 7 AM, on a recent day when spring was finally in the air.

Given the time of day and the differences in the configuration of buildings along the street, what appealed this time was not the haunting quality of storefront light at early nightfall but something else: the palimpsest quality of the non-windowed spaces, layer on layer of revealed human intention.

Dr. Johnson once remarked that to find a new country and to invade it has always been the same thing.  People–even awfully nice and inoffensive people like hipsters–are natural colonizers, despite whatever self-image to the contrary.  Dogs pee on fire hydrants and people . . . well . . . 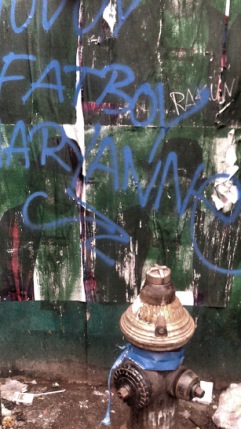 they also leave their mark.  A walk down Bedford Ave. revealed communications from different, and perhaps rivalrous, communities.

Williamsburg is an area that is, as they say, in transition, so it is not surprising that we should find evidence of various tribes along the trail.  Now, Williamsburg is not in transition nearly to the extent as other neighborhoods like Bed-Sty but neither is the complete colonization by the young and hip an accomplished fact.  Sure there are hipsters on display, and can be spotted at a distance.

But there are plenty of non-hipsters around too.

So the neighborhood retains something of a mishmash quality that can be attractive.  At least that is how Fenster found it that early spring morning recently, and set out to peel back some of the layers of the palimpsest. 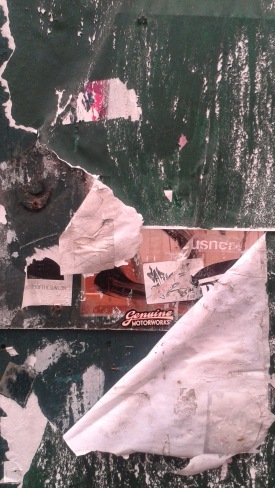 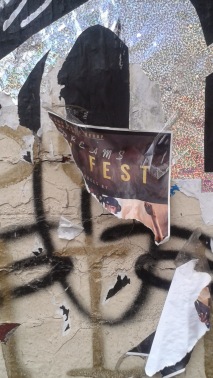 Of particular interest was an examination of tribal communications.  Which groups colonized what kinds of spaces and what were they trying to say?

The spaces that were most aggressively on display as communications vehicles: doors into buildings along the street.  Doors into private space are an interesting mix of private and public.  Unlike a blank wall at a construction site,  say, doors into buildings are, while in public space, nominally private.  Some were treated that way and were spared any messages. . .

or perhaps their own.

But for the most part hipsters avoided private doors.  These were left to a different and more aggressive tribe prone to old school graffiti, the kind of tagging that was rife in the Manhattan I left in the early 80s but which has effectively been banished on most of the island.  Indeed, the riot of graffiti colors and styles left me almost . . . almost . . . nostalgic for the Manhattan of my yuppie younger self. 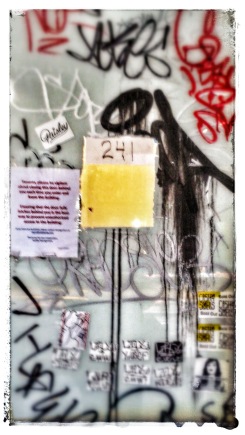 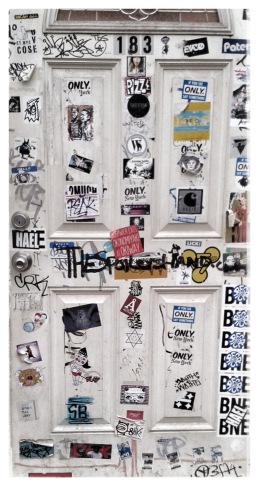 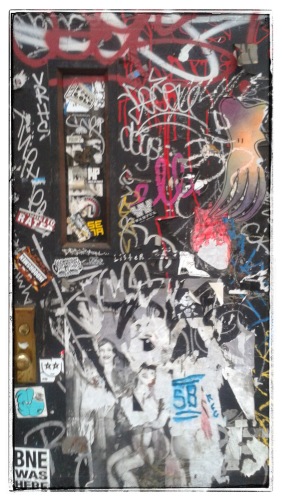 The opposite was the case with more public spaces.  There, the hipster element came to dominate.

Here is the side of a storefront with ATM.

and here are close-ups of the tangled mass of messages. 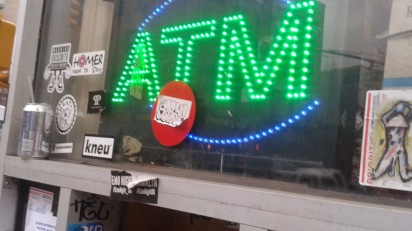 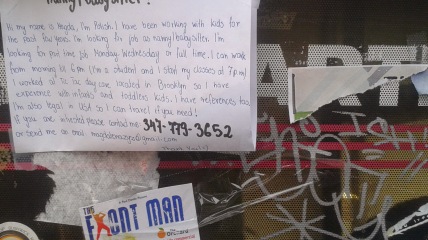 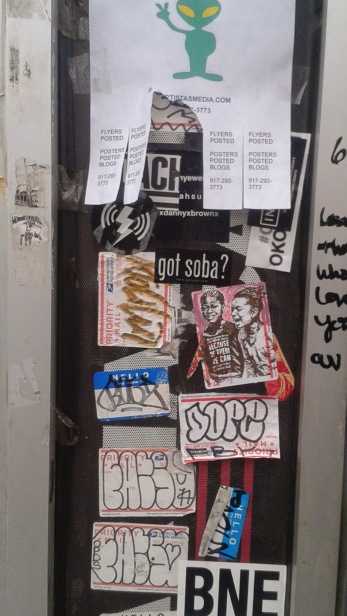 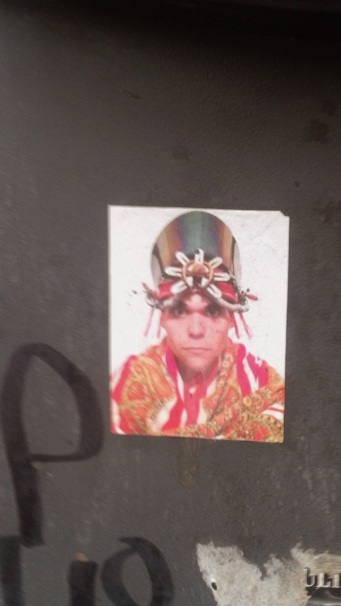 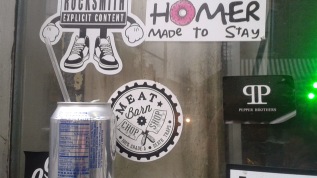 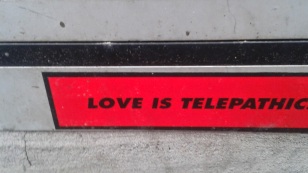 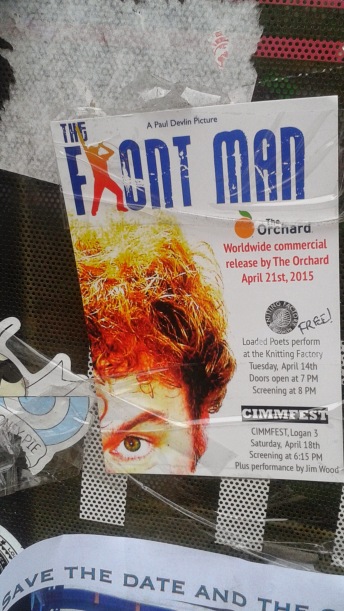 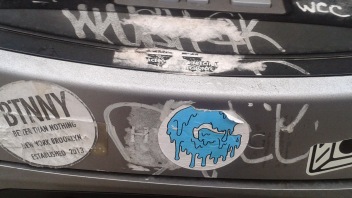 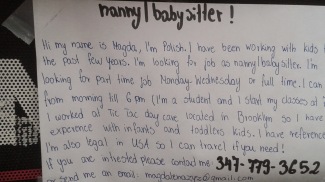 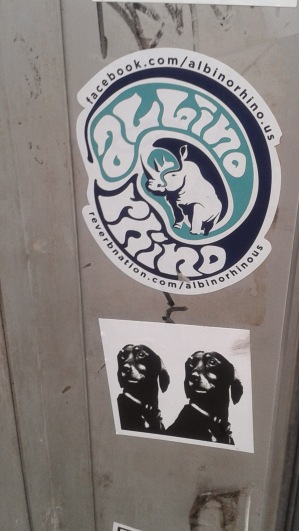 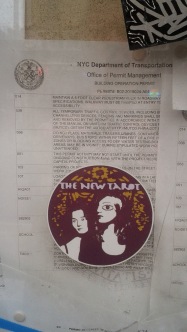 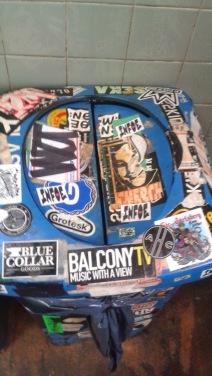 Of especial note: ATMs.  I have never seen such a quantity of ATMs in a several block area.  I counted around a dozen in a stretch of no more than two blocks, with some sitting right next to each other facing the street. 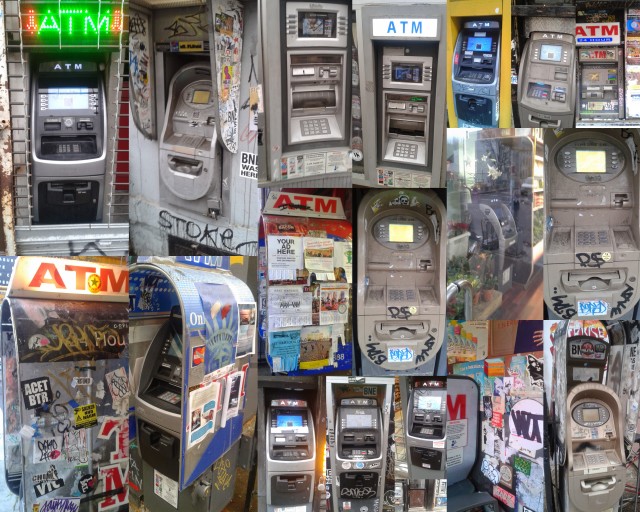 These were, no surprise, colonized by the more affluent of the tribes.  There were many messages to be seen, most of which were lifestyle related. 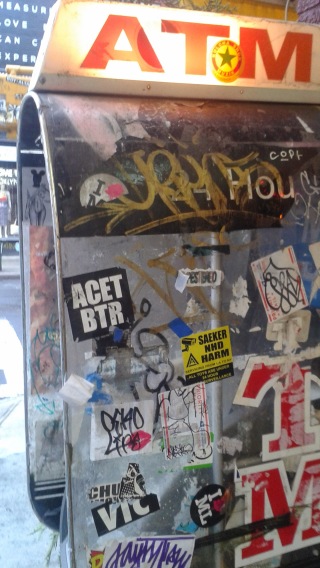 I’ll leave you with some larger works on public walls. 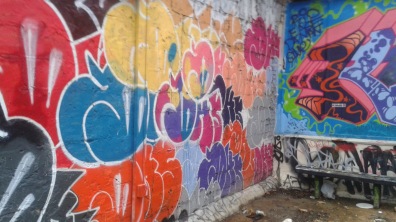 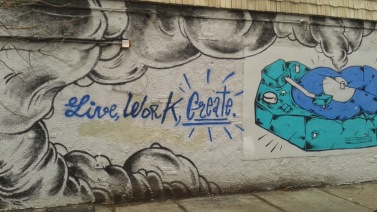 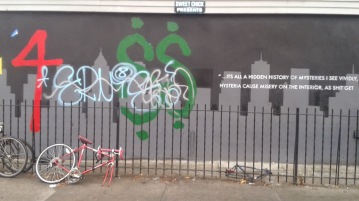 Gainfully employed for thirty years, including as one of those high paid college administrators faculty complain about. Earned Ph.D. late in life and converted to the faculty side. Those damn administrators are ruining everything.
View all posts by Fenster →
This entry was posted in Art, Commercial art, Personal reflections, Photography. Bookmark the permalink.

6 Responses to A Walk Down Bedford Ave.