In Praise of Apple Music’s Playlists

I signed up with Apple Music warily. I’d read the bad reviews, and I’m one of those people who think that Tim Cook hasn’t got a creative bone in his body. But, hey, I’m immersed in Apple’s ecosystem and the first three months were a free trial, so I gave it a try. Upshot: I’m hooked. I’m surprised and pleased to be finding myself enjoying my subscription and using it a lot. Yes, the interface still isn’t what it could be; yes, I couldn’t care less about Beats One, Apple’s “radio station”: and yes, I wish the service would stop trying push a lot of crap music on me. Why do places that I want to use as libraries so often come at me like aggressive marketing entities? Word to the wise: DO NOT GET ME STARTED on my current annoyances with Netflix …

An even bigger surprise: I’m relying heavily on Apple Music’s pre-baked playlists. When I first read about Apple’s plans for playlists I assumed I wouldn’t be using them at all. The word “curation” never fails to make me explode in mirth and, besides, as an old hand at rummaging through huge heaps of music why would I want to rely on someone else to do my music-discovering for me?

But nearly all of the Apple playlists I’ve clicked on — from alt Country to early jazz to Soukous to Bobby Darin to Boulez — have turned out to be really excellent. The “Handel Essentials” playlist that I have playing in the background at the moment, for example, is a nice balance of the predictable and the unexpected, and shows some really good (and resourceful) taste in performers: Jordi Savall, Christopher Hogwood, William Christie and Les Arts Florissants … That’s really classy stuff, and those are choices that are informed by a lot of knowledge, taste and experience. Even personality: I often wish the playlists’s creators/curators were credited. As for the service’s $9.99 per month expense: mega worth it. For the cost of one CD purchase a month I get to explore and enjoy as much of Apple’s huge library as I can find time for. I play nearly everything from the cloud and my Verizon connection is more than sufficient to deliver good sound quality as I take my daily walk.

Here’s a snap of one of the local scrub jays listening to Apple Music. A big fan of Baroque music, she’ll settle in, calm down and pay attention for 20 or 30 minutes at a time when I’m playing Purcell, Vivaldi or Handel playlists. 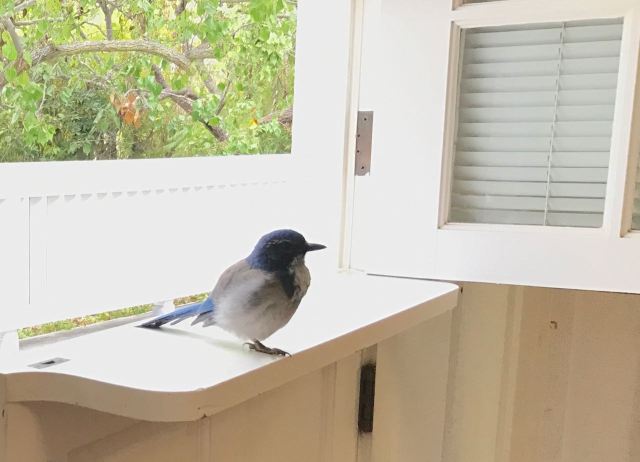 The other scrub-jay who visits us regularly has no interest whatsoever in music.

Onetime media flunky and movie buff and very glad to have left that mess behind. Formerly Michael Blowhard of the cultureblog 2Blowhards.com. Now a rootless parasite and bon vivant on a quest to find the perfectly-crafted artisanal cocktail.
View all posts by Paleo Retiree →
This entry was posted in Music, Technology and tagged Apple, classical music, Handel, Music. Bookmark the permalink.

3 Responses to In Praise of Apple Music’s Playlists