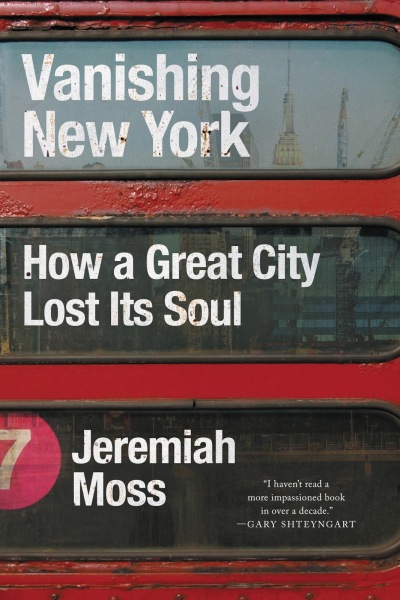 Jeremiah Moss, sole proprietor of the Vanishing New York blog since 2007, tells the history of New York City over the last 20+ years in terms of, what he calls, “hyper-gentrification.” Hyper-gentrification is “gentrification on speed, shot up with free-market capitalism” which results in a landscape of “luxury condos, mass evictions, hipster invasions, a plague of tourists, the death of small local businesses, and the rise of a corporate monoculture.” As revealed recently, “Jeremiah Moss” is the pseudonym of psychoanalyst Griffin Hansbury and his adoption of “Jeremiah” isn’t a coincidence as the book takes the form of an extended jeremiad. Moss, a native of Massachusetts who has resided in NYC since 1994, burns with the fire, brimstone, and righteous indignation of a Puritan preacher as he condemns and laments how drastically New York has changed since he moved here. But while his passion is admirable, his historical analysis is naive and simplistic, resulting in a book that is a frustrating, frequently exasperating, read.

Moss basically alternates between two narratives. In the “micro” history chapters, he tells how particular neighborhoods have had their unique characters virtually wiped out. The East Village, Lower East Side, Bowery, Little Italy, Greenwich Village, Meatpacking District, Chelsea, Times Square, and Harlem are all profiled. These are the chapters, where Moss acts like a medical examiner explaining a viral infection, that I got the most out of. How the East Village went from an Eastern European/bohemian enclave to a mecca for trendy bars and shimmering glass condos. How the Lower East Side’s history of socialist rabble-rousing was corrupted by the Red Square luxury complex. How the opening of the Bowery Bar and Cooper Square Hotel spelled the beginning of the end of the Bowery, culminating in the closing of CBGB. And, perhaps most famously, how Times Square went from a seedy den of sex shops and strip clubs to glitzy outdoor mall of chain restaurants and clothing stores. Moss describes these neighborhood devolutions with sufficient detail that I want to revisit the areas to reconstruct their deaths myself.

The personal, memoir-like approach of the “micro” chapters is contrasted with “macro” how-the-hell-did-we-get-here? history of the “macro” chapters. In attempting to give the Big Picture, Moss falters badly. These chapters call out for a good historian or investigative reporter, but all Moss has to offer is more moral condemnation. Hyper-gentrification, you see, is caused by rich racist reactionary whites screwing over poor progressive blacks, Puerto Ricans, the working class, socialists, gays, queers, and other fringe groups. His Manichean worldview colors the last 150 years of the city’s history, so New York City from the end of the Civil War until today is one long narrative of the Obviously Evil oppressing the Obviously Good. Could it be that Hansbury, a transgender man who fled his small New England town for the freedom of the big city, so identifies with the oddballs and marginalized that he’d rather root for his side than even attempt an objective analysis?

Moss, like many New Yorkers, idealizes the gritty city of the 70s and 80s. On the one hand, I can appreciate why so many people cherish that era. I remember talking to Paleo Retiree about those good ol’ bad ol’ days once. He said during that period, anyone that could afford to flee the city did, leaving, for those who stayed behind, a “middle-class playground.” On the other hand, the city was notoriously dangerous during that era and it’s no wonder why the citizens eventually voted in a law-and-order Republican like Giuliani. More importantly, contrary to Moss’s reading of history, the economic and social shocks that New York City suffered weren’t all the result of rich white racist reactionaries. During the period from 1946 to 1993, Democrats held the mayoralty for all but about four years. The disaster that was urban renewal, which in NYC can trace its lineage back to at least Jacob Riis, was a progressive project. Liberal Democrats pushed the Immigration Act of 1965. Moss purposefully ignores how Democrats and progressives were significantly responsible for much of the city’s decline. But what about the causes of hyper-gentrification, our ostensible subject? While Moss concedes that gentrification is part of the normal lifecycle of a city, what does he blame for the explosion of chain stores and outrageous rents since roughly the mid-90s? Milton Friedman. I’m only exaggerating slightly. Neoliberalism gets a well-deserved drubbing, but in his eagerness to condemn conservatives and libertarian economics, Moss neglects to notice that NAFTA and globalization have just as many fans on the left side of the aisle as the right. Also, I’m not sure how you spend over 400 pages talking about the collapse of mom-and-pop stores and not once say the word “Amazon”.

Defenders of gentrification usually respond that there isn’t much to be upset about because change, especially in dynamic cities, is inevitable. They’re of course correct but Moss’s argument might be stronger if he conceded that point on some issues, instead of merely acknowledging and dismissing it. For example, the demise of the diner/coffee shop. While a good diner is a beautiful thing, I think it’s also true that the American palate has improved substantially over the past 30+ years and many diners are still serving indifferent or just plain bad food. Moss may love Eisenberg’s, but the one time I went there and ordered one of their signature dishes I was disappointed by the bland sandwich I received. Does this mean I want Eisenberg’s to close? Absolutely not, I hope it’s around forever. And hey, maybe my visit there was an off day. But I don’t blame people at all for passing it up for the hipster Italian foodhall Eataly or Madison Square Eats, both one block north.

Despite my differences with Moss, I think his heart is basically in the right place, so I kept reading the book even though I felt like giving up more than a few times. I’m glad I stuck with it because there’s an interesting bit in the final chapter: a defense of nostalgia. He writes:

Nostalgia is not a bad thing. It’s an important part of mental health. In a mortality salience study from the United Kingdom, researchers found nostalgia to be a “meaning-providing resource” and a form of “terror management.” When instructed to think about death, subjects prone to nostalgia were less disturbed by their own mortality. In another study from China, nostalgia was found to decrease feelings of loneliness. “Nostalgia,” wrote the authors, “is a psychological resource that protects and fosters mental health.” A third study showed that “[n]ostalgia increases empathy toward those in need, which, in turn, increases charitable intentions and giving.” In short, nostalgia can be a positive emotion that bolsters our sense that life is meaningful, decreases our fear of death, increases self-esteem, strengthens social bonds, and boosts empathy, which then leads to helping others. If only New York had more nostalgics.

Why are some people so invested in getting us to forget the past? Many probably profit from the new New York. Or they like it and don’t want to feel bad about liking it. They want to enjoy guilt-free lattes, bike lanes, and nice restaurants without having to think about the impact. Or else they just can’t bear the pain of loss. Some are nostalgics of a different sort. At the end of Times Square Roulette, Lynne Sagalyn names five types of nostalgics or “voices of lament.” …If it’s not yet abundantly clear, I’m an outraged Retrograde. I get impatient with the Wistfuls, Skeptics, Reminders, and Resilients with their “Oh, well, everything changes” shrug of futility and forgetting. New Yorkers need to remember and get angry. I know it’s hard. We’re all stumbling through a smoke screen of propaganda and doublespeak. Around the world, people feel helpless watching their cities get squeezed by the same money-drunk global monoculture and winner-take-all drive to compete. With a force so ubiquitous, it’s difficult to recall that urban life was ever different. Writing in 2015 on the death of bohemian Paris, Luc Sante nailed it when he said, “We have forgotten what a city was.” We must remember.

Proudly declaring himself retrograde? Arguing that nostalgia — and, by extension, the old things he wants to preserve — connects us to the great chain of being thus giving our lives meaning? Does Moss not realize he’s making a small-c conservative, perhaps even reactionary, argument? (Robert Conquest’s First Law of Politics: “Everyone is conservative about what he knows best.”) For those of us who have ever defended traditional architecture at forums like ArchDaily or Reddit’s r/architecture, one of the modernists’ favorite insults is to dismiss any interest in traditional forms as know-nothing nostalgia. Does Moss realize his veneration of nostalgia puts him at odds with many intellectual progressives? He also seems unaware that the glass-and-steel style indicative of the current era of hyper-gentrification — the preferred architecture of the “money-drunk global monoculture,” as he puts it — is the architecture of progressive neoliberalism. Moss’s call to curtail foreign investment will also earn him the scorn of universalists but endear him to us  localists.