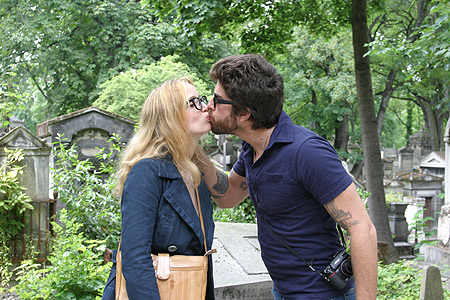 The Wife and I managed only 20 minutes of this charmer-wannabe, written and directed by the French actress Julie Delpy, before giving up. It’s about a spatting/loving couple (Adam Goldberg, not very appealing, and Delpy herself), and it seems intended as a female take on a Woody Allen movie. It completely failed to engage us, though. But we watched the interview with Delpy that’s included on the DVD, and we both liked her. She’s smart, and she has a real performer’s put-it-out-there guts. The movie is currently available on Netflix streaming.

Onetime media flunky and movie buff and very glad to have left that mess behind. Formerly Michael Blowhard of the cultureblog 2Blowhards.com. Now a rootless parasite and bon vivant on a quest to find the perfectly-crafted artisanal cocktail.
View all posts by Paleo Retiree →
This entry was posted in Movies, Performers and tagged Julie Delpy, movies. Bookmark the permalink.

4 Responses to “Two Days in Paris”