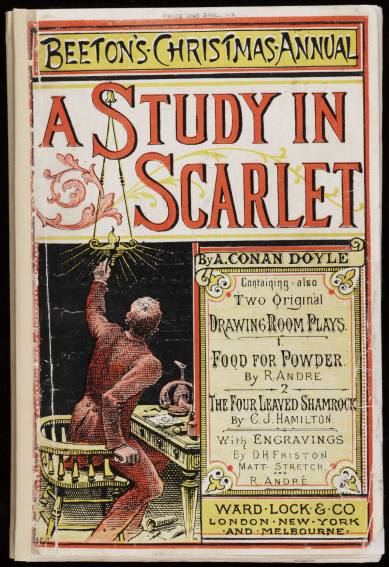 “There’s the scarlet thread of murder running through the colourless skein of life, and our duty is to unravel it, and isolate it, and expose every inch of it.”

Everyone knows the character, but have you ever read any of the Sherlock Holmes stories? Until recently, I hadn’t, but a friend runs a book club and this month’s selection is The Adventures of Sherlock Holmes, Conan Doyle’s first collection of stories, so I finally took a look. Here are a few random observations:

1. Holmes is one of the most influential and popular characters in English literature, right? First, there are the straight adaptations of Conan Doyle’s work like the movies starring Robert Downey Jr, the recent BBC series, and the new American adaptation (with Holmes living in New York and Watson played by Lucy Liu). But then there are all the other eccentric detective shows like The Mentalist, Psych, and House. Seems like whenever you have a private investigator solving crimes by unorthodox means, you can trace the character back to Holmes. Batman is another obvious successor. Finally, procedurals like CSI and Law & Order are descendants too. Dick Wolf has even explicitly said in interviews that the Sherlock Holmes stories were a key influence on the various Law & Order series. Pretty impressive for stories that are a century and a quarter old.

2. I think one of the reasons the stories remain popular is because they feel pretty modern. When you think of the traditional English murder mystery, like Agatha Christie, you picture the closed world of the great manor house or luxury train car and the cast of a dozen suspects. Holmes, on the other hand, exists in the bustling, global city of London. Indeed, there’s an international connection in almost every story. In the eight I read, New Jersey, Pennsylvania, Cleveland, France, Bohemia, Germany, Afghanistan, Florida, and Switzerland are visited or referenced in some way.

As for the Holmes character himself, he’s an arrogant, pushy, hyperintellectual, sexless, dark loner with an unwavering faith in science who’s an amateur musician and drug addict. That pretty much describes half the users on reddit.

3. That said, I found the stories themselves to be disappointing for the most part. It’s like Conan Doyle constructed this wonderful instrument but didn’t know how to play it. The structure of the short stories is fairly rigid:

The main problem is that Holmes is almost never wrong, so there aren’t enough story turns. In Story, Robert McKee talks about “the gap,” i.e. when there’s a disconnect between a character’s expectation of the world and actual reality. When the gap opens up, the character is tested. We, the audience, lean forward at those moments to observe how the character will act. It’s one of the tricks storytellers have to keep us engaged. If a character is always correct, then the gap never opens and stories start to feel flat and lifeless.

There’s one notable exception, though, the story “A Scandal in Bohemia,” in which Holmes is outwitted by the American actress, Irene Adler. (Speaking of Adler, she’s a far better and more interesting nemesis for Holmes than Prof. Moriarty. Moriarty makes one appearance in the Holmes canon and it’s a complete let-down.)

4. One last quick note about A Study in Scarlet, the novella that introduced Holmes to the world. Half the story is a murder investigation in London and the other half is a flashback of what motivated the murders. The flashback takes place in Utah and the villain is no less than Joseph Smith and the Mormons. When the BBC adapted this story for their living-in-modern-London Sherlock series they excised the Utah/Mormon half. Talk about a missed opportunity! They should’ve kept that part intact and made the villain Tom Cruise and Scientologists.

So what do you guys and gals think? And has anyone read Conan Doyle’s Lost World or Brigadier Gerard stories?