Where most things go, I’m a pluralist. As Vedanta maintains: one goal, many paths. And my pluralism extends to transportation policy. Let’s not let any one or two forms of transport dominate, let’s have them all: trams, cars, blimps, planes, bicycles, trains, scooters, mini-buses …

America gives itself over to cars and planes ‘way too completely, IMHO. In my preferred version of the country, whenever do-able and sensible we’d always and everywhere enjoy walkways, bicycle lanes, center medians given over to trolleycars, etc — and our places and roadways would be designed from the outset to take all these forms of getting-around into account. As it is, we prioritize the car while — every now and then, and always reluctantly — remembering to make a few concessions to pedestrians and bicyclists.

That said, man-o-man do I often dislike the way American bicyclists carry on. (Can it be said that there’s an American culture of bicycling? If there is, I don’t like it very much.) They race around at top speed. They charge the wrong way down one-way streets. They ignore stoplights and stop signs. They’re reckless and uncooperative in completely unnecessary ways.

This isn’t a trivial matter. I know a couple of people who got knocked over by bikes traveling at speed. In one case, the bicyclist ran a red light right into a pedestrian crosswalk and hit a 68 year-old woman. In the other, the bicyclist was going the wrong way on a one-way street and slammed into an unsuspecting younger woman. These were gruesome and painful accidents involving trips to the emergency room and weeks of tedious and painful recovery. A man on a metal device traveling at 20 mph makes quite an impact — and can wreak a lot of havoc — on an unsuspecting body that’s looking the other way.

Reckless and thoughtless bikers are a threat even to automobile drivers. I’m the world’s most unhurried, considerate and careful driver, yet the other day I found myself swearing amidst a small mess of screeching and honking cars. It turned out that the tangle had been caused by a couple of bicyclists who’d run a red light. As you might expect, the two women bicyclists emerged from the mess, smiled at the rest of us, and waved sweetly, as though expecting us to find them oh-so-eco and oh-so-retro-charming.

And don’t get me started about how ridiculous most people look dressed up in bike-racing gear. I’m OK with the fact that there are a few dead-serious biker-athletes out there. But most people in bicycling outfits are offenses against any conceivable kind of good taste. Americans, eh? Always racing around, always looking for a reason to dress up like superheroes and sports stars. BTW, when did grownup Americans start dressing up like sports heroes anyway? Men didn’t generally do that when I was a kid.

I can semi-understand why American bicyclists carry on like hotshots, militants, badboys and protestors. We’ve so over-emphasized getting around by car that people who prefer biking feel persecuted. Isn’t one person on a bike as valuable as one person in a car? Why aren’t bikers’ needs being attended-to as lavishly as those of drivers? Besides, if most automobile drivers are inconsiderate towards bicyclists, why shouldn’t most bicyclists act inconsiderately towards automobile drivers? (Me, I’d argue that most drivers hardly give bicyclists any thought at all.) It’s clear where the power is, and it isn’t with the bicyclists. And of course I’m sympathetic to the general argument that America ought to treat its bicycles and bicyclists more thoughtfully and generously.

All that said, the situation isn’t pleasing. There’s too much asshole behavior coming from our bicycling culture.

It doesn’t have to be that way. When my wife and I visited Berlin a year ago, we were delighted by the way the city incorporates multiple forms of transportation into its fabric. Berlin — a big, spread-out city made up of numerous smaller city-centers — is heaven for walkers. Buses and trams/subways are well-run; cabs are easy to hail … And there are bike lanes everywhere. Drivers and pedestrians both know to expect bicyclists, and they know how to take them into account too. Granted, my wife and I nearly got knocked over a couple of times during our first days in Berlin. But it was entirely our fault — we hadn’t grasped the rules yet. We learned quickly, though. We adapted, and we soon came to relish the dancing interplay in the city between bikes, walkers and cars.

A Berlin bike lane at twlight.

One nice and striking thing about bicyclists in Berlin: the modest and sensible way most of them go about their bicycling. In ten days there, we didn’t spot more than a half a dozen bicyclists doing hotshot things, let alone wearing absurd stretch clothes. Few of them were racing around; they seemed to favor eccentric old bikes; and they weren’t about to change from their everyday attire into flashy training clothes just to get on their bikes and pedal a distance. 99% of the bikers we saw, in other words, were everyday people using sensible bikes to get someplace-or-other. They waited at stoplights, they respected pedestrians when it was appropriate. You might almost mistake them for grownups. 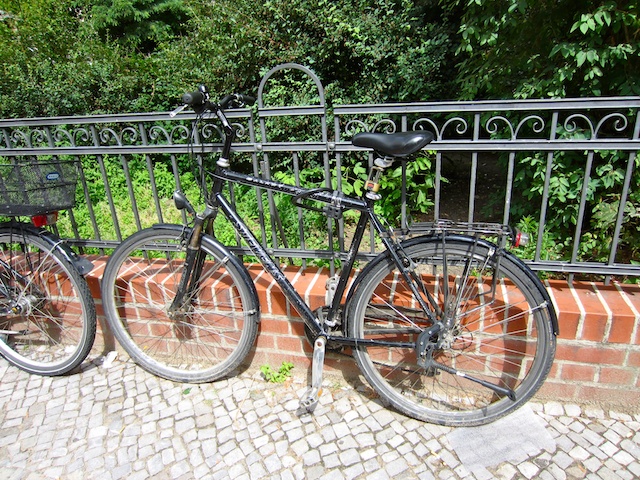 Were they able to do this — to play a confident yet modest part in the to-and-fro-ing of city life — at least partly because they themselves are treated with respect? In NYC it’s quite common for drivers and pedestrians to swear at bicycles, as though they really shouldn’t be allowed. Given the way some of the bikers conduct themselves, some of the swearing-at-’em strikes me as totally understandable. If bicyclists want to be part of the transportation-system of the city, then they should be held accountable to the rules everyone has to follow. Still: Many people are just really antagonistic to bikes. The bicyclists return the warmth, of course. In Berlin, by contrast, the presence of tons of people on bicycles is just an accepted fact of daily life. And taking bikes into account is just a part of life-as-it-is.

I suppose that it’s also possible that Berlin bicyclists conduct themselves as they do largely because they’re Berliners — ie., German, ie., orderly. But for the purposes of this blogposting I’m not going to go there. I prefer to think that Berlin and its bicyclists are showing the rest of us something of what a city can be like if its planners take a many-layered approach to transportation. Yay, pluralism.

FWIW: I like bikes myself, and if I lived in something like a college town I’d probably be out on one almost every day. As it is, I split most of my time these days between a huge city where biking strikes me as suicidal and a ‘burb where biking is kind of pointless — it’s not as though you can bike out to do the day’s shopping — except as exercise. And for exercise I’d rather walk, or do yoga or qigong.

Are y’all out there on bikes very often? If so, what’s it like? If not, why not?

Onetime media flunky and movie buff and very glad to have left that mess behind. Formerly Michael Blowhard of the cultureblog 2Blowhards.com. Now a rootless parasite and bon vivant on a quest to find the perfectly-crafted artisanal cocktail.
View all posts by Paleo Retiree →
This entry was posted in Personal reflections, Politics and Economics, The Good Life, Travel and tagged Berlin, bicycles, transportation. Bookmark the permalink.

14 Responses to Bicycles and Berlin