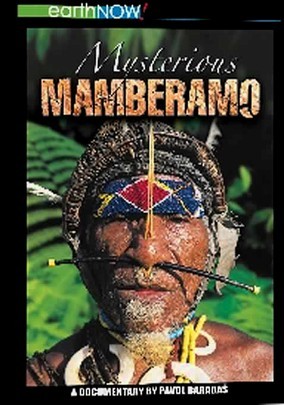 “Mysterious Mamberano” is one of several adventure documentaries available on Netflix Instant made by a Slovakian filmmaker named Pavol Barabas. I’ve watched and enjoyed them all. This time Barabas and a couple of buddies set out to go down the Mamberamo River in Irian Jaya (ie., the western half of what most of us think of as New Guinea). There are corrupt officials to bribe and deceive, landing strips in the midst of jungles to be braved, rafts to be hauled, oozy cliffs to be ascended, rapids to be navigated …

The footage of landscape and water and the time spent with near-untouched tribespeople are perfectly amazing. This footage isn’t remotely like the ultra-glossy, let’s-marvel-at-the-wonder-of-it-all stuff of so many NatGeo nature documentaries. This is Handicam stuff shot in rough conditions. It looks like what a lot of crappy, routine days in the jungle probably really look like.

But the movie isn’t meant to be about the wonder of it all. Instead, it’s about the nutty adventure-for-the-sake-of-adventure trip itself. It’s about a small group of obsessed, determined white men penetrating into the heart of what are presented unashamedly as darkest primeval forests; confronting lizards, insects, snakes, malaria, and pain; experiencing the ecstasy of the wilderness and the wildlife; enduring the challenges of making peace with suspicious tribespeople and of subsisting on unfamiliar foodstuffs.

In all the above ways, Barabas’ documentaries have some similarities to Werner Herzog’s. Watching them, though, I was reminded less of Herzog’s films than of European photo magazines, with their mixture of visual features on slaughters in Africa, sexy white models cavorting in front of dark-as-the-night tribespeople, insanely risky Alpine assaults, etc. Barabas doesn’t try to equate the mania of European conquerors with art-making, as Herzog does. Instead his films are records of his own crazy adventures. The craziness — and the point — is in the trip itself, not in the filmmaking.

The genuinely shocking part of Barabas’ movies comes from the fact that he (and presumably his European fans) are unapologetically into values that we blanded-out Americans no longer permit ourselves: the thrill of the exotic, contrasts between civilization and nature, between civilized people and, well, er, primitives …

This particular Barabas yarn ends anticlimactically; halfway through the quest a raft capsizes and all the photographic equipment is k.o’d, so we aren’t able to see the actual descent down the river. I had a good time watching the film nonetheless. I also had a good time after the film was over savoring a lot of indignant comments about the movie on Netflix. About half the viewer-reviews are from right-thinking intellectual types who attack the movie for not offering an undergraduate-anthro-major, all-cultures-are-equal view of the place and the people. How dare Barabas present the New Guinean forests as places of myth and fear? How dare he treat them as a setting for Europeans with a drive to prove themselves? And — sin of sins — how dare he experience and present the tribal folk he encounters as strange and exotic? Doesn’t he know better? (Answer: Hey, right-thinking Americans, the rest of the world doesn’t give a damn about what you consider to be correct and fair.)

As exotica-besotted as the film admittedly is, though, I detected less condescension in Barabas’ view of the natives than I often do in a lot of PC views of indigenous people. He seemed to like and respect them, and to have a nice rapport with them. And for the life of me, I couldn’t see how encountering Barabas and his buds was going to spoil the natives in any way. Still, here they are, on very raw video, in all their physicality and spirit, tiny dark creatures wearing nose-bones and feathers, wielding wooden spears and bows-and-arrows, covered in mud and eating slugs. Are we really not supposed to notice (or mention) that they’re stone-age people?

Onetime media flunky and movie buff and very glad to have left that mess behind. Formerly Michael Blowhard of the cultureblog 2Blowhards.com. Now a rootless parasite and bon vivant on a quest to find the perfectly-crafted artisanal cocktail.
View all posts by Paleo Retiree →
This entry was posted in Movies and tagged adventure, anthropology, documentaries, indigenous people, movies, natives, Pavol Barabas, tribespeople. Bookmark the permalink.