After a few months away from town, The Question Lady and I returned to our home in Manhattan to discover some new neighbors. Here’s a little collage of them:

Three new 7-Eleven stores. Three! All within a few blocks of us. What kind of expansion-rampage is the 7-Eleven corporation on anyway?

A fast word of explanation. The neighborhood we live in is Greenwich Village. The Village: home of John Reed, Eugene O’Neill, Jane Jacobs, Beat poetry, W.H. Auden, and punk rock. Here are some not-untypical views of the Village.

Coffee houses … Tons of theaters and yoga studios … Oddball boutiques and living spaces … Low-lying, leafy streets … The Village is bliss for anyone who loves funky-sophisticated urban living. (Sad that such neighborhoods are so few and far between in the U.S.) Compare the textures — visual and social — of the Village to the textures of the 7-Eleven storefronts. Definitely not a good match.

The Village is someplace we had to put some effort into getting to. Although back in the ’40s and ’50s the Village was a place where an actor could live while working as a waiter, in recent decades it’s become desirable and expensive. (The old, more affordable “Village” feeling has moved out to various neighborhoods in Brooklyn and Queens.) So The Question Lady and I really had to apply ourselves to be able to make the move into a modest Village apartment, and we spend a sizable number of scheckels maintaining our lives here. It’s a place we not only love, in other words. It’s one we have worked hard to be able to make a life in.

Let me admit upfront that the Village collage above is pretty idealized. I put it together to emphasize the neighborhood’s small-scale urban beauty and quirkiness. In truth the Village isn’t all boho utopia. It includes some rasty, in fact downright tacky and bleak areas. And during the years that we’ve lived here, we’ve seen the area be invaded by three unwelcome (by us) waves: yuppies; corporate America (Staples, Starbucks, innumerable bank branches); and  developers and chic architects intent on capitalizing on the loveliness of the neighborhood while doing everything they can to ruin it. Hey, have a gander at this recent addition to our funky streets: 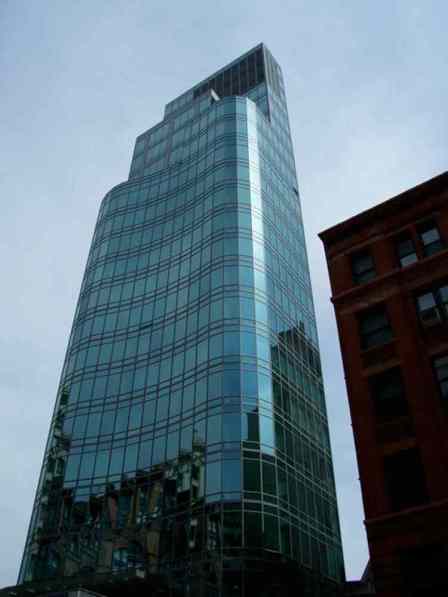 Full of charm and character, right? (More about these particular invaders in a future posting.) Still, the Village remains a neighborhood with a distinctive identity and a lot of personality.

There’s some apprehension involved in living in a neighborhood that suits you. Things can get ruined so quickly, after all. And the Village’s ecosystem is such a fragile one …

Here’s one source of anxiety. The Village is bordered on the north side by 14th Street — think discount department stores, Best Buy, small shops with loud radios selling stolen merchandise … It’s rough, it’s loud, it’s crowded. On the south side (not just of the Village but of the contiguous, equally lovely SoHo), there’s Canal Street — very similar to 14th Street but even more congested. How is it that 14th Street and Canal Street don’t spill farther into the neighborhoods of SoHo and the Village than they do? It’s a really remarkable urban phenomenon. Stand at the intersection of 14th and Broadway and you might almost be in Times Square. Go two blocks south and you’re in quiet, offbeat Greenwich Village. Stand at the intersection of Church and Canal and you have to watch your pockets. Head north a block and you’re among sexy Eurotrash and deluxe art galleries. How does that happen?

(Answer: Greenwich Village and SoHo are full of neighborhood organizations and protest groups, and the residents have worked out all kinds of formal and informal understandings with local politicians and the NYPD. The Village isn’t anything like a suburban gated community in terms of its feeling — it feels more like Paris than Hidden Hills. But, as a practical matter and in an unofficial way, it’s a bit of a protected enclave anyway.)

Now, to some extent the Village depends economically on attracting non-Village inhabitants: bridge ‘n’ tunnel people (ie., kids from NJ and Westchester, in for the night to drink and party), tourists, working-class people out for some exotic fun. As a practical matter, if/when you walk around the Village you aren’t just amidst beret-wearing artists; you’re also passing by stressed-out yuppies, giggling students, bellowing drunks, smelly panhandlers, and boastful Guidos. So I wouldn’t want everyone to just leave the Village alone. Besides, part of the fun of the Village is the crazy-quilt mix of people that pass through it.

But how many non-Village interlopers can the Village absorb and still remain the Village? The chain-store numbers have gone up really alarmingly in the years we’ve lived here, for instance. How many of them can open before the Village goes all bland and anonymous? There have been moments when The Question Lady and I, running across yet another Vitamin Shoppe, have wondered out loud what the point of living in the Village is if we’re just going to be living amidst the same set of retail outlets that suburban mommies and daddies patronize.

Another example is Washington Square Park, the square-with-an-arch-and-a-fountain in the NYU area that is at the exact center of the Village. Back in the bad old 1970s, the park was overrun by so many druggies, bums and panhandlers that it became essentially unusable by anyone else. We Village inhabitants may not generally be big fans of cops — but we were awfully glad when the sleazy, dangerous people were shoo’d away and the park was cleaned up. Washington Square Park became part of Greenwich Village — Greenwich Village as we knew it and liked it — once again.

Back to those newly-arrived 7-Elevens … 7-Elevens? In the Village? Three of them?

My immediate response: seriously not pleased. And instantly wondering, “What can we do to push them back to where they came from?”

Part of me was responding to the corporate/chain dimension: “Oh Christ, not another chain invading our neighborhood. Godammit, can’t there be one place in America where you can live free of corporate dominance?”

The other side of my response had to do with the kind of crowd 7-Elevens tend to attract, which — let’s be honest — isn’t exactly bohemian. Here I suppose I should be careful and delicate. 7-Elevens, in my experience, tend to appeal to the poor-to-working-class crowd. Now, I don’t look down on poor or working-class people. Wish ’em well, I really do. I approve of — and sometimes even enjoy visiting — 14th Street and Canal Street. But, in all honesty, I don’t want to live there. I want to live in Greenwich Village. So every time a store or a restaurant goes up that seems likely to draw people from 14th Street down into the Village, I find myself fretting. Hey, I don’t dislike upscale mommies pushing thousand-dollar prams either. Well, not too much. I just feel like they’ve got other neighborhoods that’d suit them better, you know?

Where politics and development go, I tend to be pretty loosey-goosey. If people aren’t harming you or taking your property, then let ’em do what they want to do. But, but … Well, I also feel a deep attachment to my neighborhood. Greenwich Village isn’t just an abstract scattering of roads and buildings, after all. It’s a living-breathing entity in its own right, and one with a character that I like and have formed a strong bond with. And, while I certainly don’t own it in any technical, let alone financial, sense, I do feel that Greenwich Village is my neighborhood. (Note the possessive: “my” neighborhood. Living someplace that you love confers a kind of ownership, doesn’t it?) So when a twinkly architectural nightmare goes up, or when another chain store opens, or when the crowds from 14th Street start moving ever-closer to the block where The Question Lady and I live, I worry.

Is wanting to protect and conserve something that you love — and something that you’ve worked hard to achieve — wrong? Is it unnatural? Can we can reasonably ask, let alone expect, people to overcome such feelings? And, if we can’t, what does that tell us about libertarianism, egalitarianism, and liberal-ness generally?

Onetime media flunky and movie buff and very glad to have left that mess behind. Formerly Michael Blowhard of the cultureblog 2Blowhards.com. Now a rootless parasite and bon vivant on a quest to find the perfectly-crafted artisanal cocktail.
View all posts by Paleo Retiree →
This entry was posted in Architecture, Personal reflections and tagged 7-11, architecture, Greenwich Village, urbanism. Bookmark the permalink.