“The Hands of Orlac” 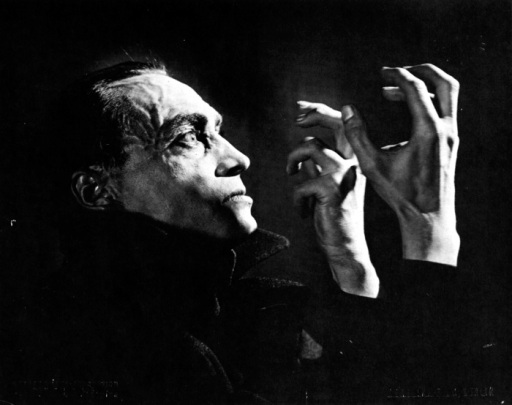 Directed by Robert Wiene, the 1924 “The Hands of Orlac” takes the psychological emphasis of Wiene’s “Caligari” and gives it an undertow of pained Germanic romanticism (among other things, it’s a fever dream of emasculation). Conrad Veidt plays Orlac, a famed pianist who loses his hands in a horrific train crash. Experimental surgery gives him the hands of a killer — or so Orlac believes. And before long Orlac himself is driven to kill. Or maybe he doesn’t kill: our understanding of events depends on which frame of the narrative we’re occupying at any given moment. Veidt is hypnotic. Peeling back the layers of his cool, fin-de-siècle beauty, he makes his moonbeam eyes and marionette frame seem wracked by a will that is not his own. The more delusional he becomes the more his hands seem alien to his arms — like heavy stone transplants from Paul Wegener’s Golem. When he gets really worked up his veins bulge and throb in tune to the tortured acrobatics of his psyche (the performance is a triumph of vascularity). Veidt’s contortions probably wouldn’t be so effective without the counterpoint provided by the luxe, expansive settings. Inverting the flat fussiness of “Caligari,” Wiene stages much of “Orlac” in deep space, using shadows and pools of light to emphasize the vastness of his minimalistic sets. (The art direction is by Hans Rouc and Stefan Wessely, the cinematography by Hans Androschin and Gunther Krampf.) The approach calls to mind Dreyer’s “Michael,” made the same year, and it looks forward to both “Mad Love” — an “Orlac” remake — and portions of “Citizen Kane.” Here, when combined with Wiene’s use of long takes, it serves to heighten the macabre suggestiveness of the narrative. Wisps of meaning fester and dissipate as your eye probes the compositions.