Last June I posted about Bitcoins and why I was buying them. Six months on, it’s time to take stock of where we are.

First things first, my return on investment. I bought my coins, never mind just how many, over May and June this year at an average of $102.50 each. As of this writing, we’re looking at $206.90 per. How’d the rest of you do in real estate or the stock market over that time, eh?

Gloating aside, there are good reasons for that price increase. Bitcoin’s position and future potential have never been better. In fact, an important hurdle to adoption appears to have been passed, along with those price milestones. 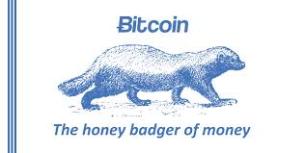 Ask people about Bitcoin and if they’ve heard of it at all they’ll say “oh that drug trafficker stuff” or something similar. Like most media distortions, it has a basis in fact. Or at least it did until the FBI seized the main internet purveyor of illegal goods, the website Silk Road. The total taken was staggering, something north of 170,00 BTC, worth 10’s of millions in dollars. But some the methods used to apprehend the criminals were revealing of a critical and poorly understood feature of Bitcoin, the public transaction ledger, called the “blockchain”.

Bitcoin is money but it’s more than that, it’s a complete accounting system. But all the accounts are public! Every single transaction in the blockchain from inception to present is publicly viewable. For example, let’s look at the last 100 largest Bitcoin transactions:

All those funny numbers are encrypted addresses that show the sender and the receiver of the transaction. True, it doesn’t say “Joe Blow” but there are lots of ways to link a person to a bitcoin address.

Think about that though, does anyone think a drug trafficker wants his transactions visible to the entire world? Bitcoin is terrible for criminals, they’ve just been able to operate unobserved. Not anymore, that cat is out of the bag. The Bitcoin price dropped on the Silk Road news, but then rebounded in a few days and has since sustained about a 50% increase from there.

Also driving that price rise is China. An announcement by Baidu, a sort of Chinese Google, that a division will accept payment by bitcoin, plus the US budget jitters, seems to have put it above $200, maybe for good. This was on massive Chinese trading volume. In addition lately I’ve seen a few articles giving a favorable gloss to investing in bitcoin, which is a new thing to me.

What next? A lot of venture capital has flowed to start ups exploring various services, and some of that fruit is starting to show up. Expect many more announcements in the next 6 months. Also there are major upgrades coming to Bitcoin-QT, the server software. Supported will be charge back and identity features that will help merchants, escrow accounts, asset titles and similar features.

IT professional and veteran of start ups. Life long musician and songwriter. Voracious reader of dead white guys. Lover of food and women.
View all posts by Sir Barken Hyena →
This entry was posted in Politics and Economics and tagged bitcoin. Bookmark the permalink.