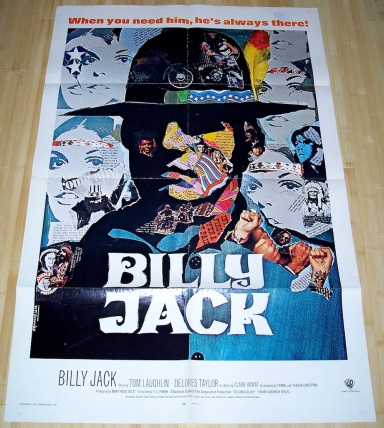 I saw that Tom Laughlin died the other day. He was mostly known for playing Billy Jack in a series of films, the most famous being the first two: the 1967 “The Born Losers” and the 1971 “Billy Jack.” You don’t hear much about Billy Jack these days, but as heroes go he was a pretty interesting figure. A tough-guy cowboy type who was part Indian, he was devoted to defending the helpless and the marginalized. Though a peace-loving man, he wouldn’t hesitate to whoop your ass if you were acting like a jerk. I guess you can say he was a prototype for the good-guy badass characters of later years, like Buford Pusser (portrayed Joe Don Baker in “Walking Tall”), Dirty Harry, John Rambo, and Steven Seagal. (Billy Jack was a martial arts master at a time when Seagal was still growing out his ponytail.)

If, like me, you didn’t live through the ’60s and early ’70s, you might take “Losers” and “Billy Jack” as good introductions to the popular attitudes of the day and the way in which they were rapidly changing. In the earlier film Billy Jack helps maintain social order by walloping on a gang of degenerate counter culture types, just like the stalwart sheriff wallops on the desperadoes in an old-school Western. But by the release of the later film he’d gone full-on hippy; now he was fighting on the side of the counter culture and against the social order, represented by a group of dudes who can only be referred to as “The Man,” in order to save a Feminist school teacher and her progressive kumbaya school. I guess you can say that whereas “Losers” is a conservative Western in the tradition of “The Virginian,” “Billy Jack” is a liberal Western more in line with “The Oxbow Incident” and “High Noon.”

Laughlin wasn’t just an actor: he directed the “Billy Jack” movies, and he was a notable independent-minded filmmaker of the era. When the studios failed to support “Billy Jack,” Laughlin took over distribution himself, turning it into a huge moneymaker. For what it’s worth, I think he was a pretty talented director, one with a good eye for composition and a feel for the simple oppositions to which popular audiences tend to respond most strongly. And you have to respect Laughlin for giving such weight to his female co-stars. Elizabeth James actually wrote the screenplay for “Losers,” and Delores Taylor co-wrote “Billy Jack” with Laughlin. This gives both movies an unusually female perspective, especially in the scenes showing women being menaced by male aggressors. Taylor, in particular, has a harrowing rape scene — it’s the consummation of the almost-rapes that James endures (and is saved from) in “Losers.”

Oh, I also love the poster for “Billy Jack.” Designed by Piero Ermanno Laia, it captures the essence of the character as well as the over-burdened, roiling vibe of the era. It’s featured at the top of this post.