The ideal physique for women has definitely changed over the years.  Less zaftig not only since Rubens but even since the 1940s.  Tom Wolfe tried to capture how far the svelte aesthetic advanced by the turn of the century when he coined the term “boys with breasts” as the ideal type lusted after by his macho protagonist in A Man in Full.

[BTW I tried to find a suitable Google image to place here in connection with that term.  Believe me, you don’t want to search Google images for the term “boys with breasts”.  The distaff Wolfian meaning is not on display there–just . . . . boys with breasts.  Hence no photo.]

But even if women were a bit plumper 60 years ago, a pinup from that period translates to the current day quite well, no?

Is the same true for men?  Not so clear since the advent of ripped this and ripped that, steroids and weightlifting.  What hath Arnold wrought? 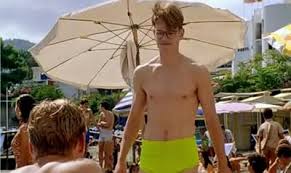 needs to bulk it up these days more often than not.  Roles in the current era require it.

Ah, but in the good old days there was no such pressure.  Real men were not obliged to show six packs.

An example.  Here is Dick Powell as Philip Marlowe in Murder, My Sweet from 1944. The dame in the film, Claire Trevor, finds the door to his apartment open and just walks in, finding Marlowe getting dressed.

“You’ve got a nice build for a private detective”. 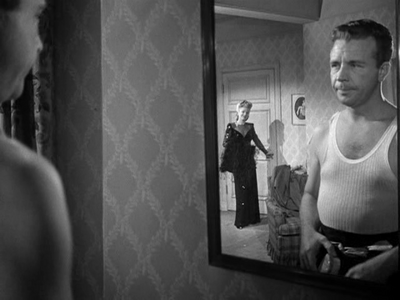 Gainfully employed for thirty years, including as one of those high paid college administrators faculty complain about. Earned Ph.D. late in life and converted to the faculty side. Those damn administrators are ruining everything.
View all posts by Fenster →
This entry was posted in Food and health, Movies, Women men and fashion and tagged Arnold Shwarzenegger, Clarire Trevor, Dick Powell, Matt Damon, Murder, My Sweet, physique. Bookmark the permalink.