Notes on “Here’s to the Young Lady” 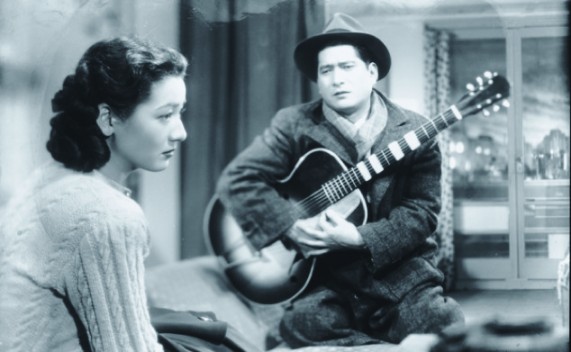 The 1949 “Here’s to the Young Lady” stars Setsuko Hara as an upper-class woman pressed into marriage by her family’s economic tribulations. The man with whom she’s set up, played by the affable Shuji Sano, is a new Japanese type: a resolute bachelor who works on American cars for a living and dreams of becoming an Eastern Ford. Director Keisuke Kinoshita brings his characteristically populist touch to the material — he and protege Masaki Kobayashi seem to have been Shochiku’s go-to guys for cheery Westernization parables — yet the picture’s attempts at generating amorous tension fall flat. Though I know nothing of the production’s history, this may be due to an apparent disconnect between writer Kaneto Shindo’s socially realistic screenplay and Kinoshita’s urge to poeticize. Kinoshita, a devotee of Rene Clair, wallpapers the picture’s soundtrack with music, much of it diegetic, in a seeming attempt to transform this workaday tale into something lyrical and maybe a little transcendent. Mostly it makes the movie feel mannered. Hara is another problem. Though Kinoshita tries mightily, he fails to get inside the actress. Hara’s contemplative, icon-like quality — employed so effectively by Ozu — is all surface here, making her suffering read as empty miming and leaving us wondering why Sano is so eager to upend his life in order to win her. Kinoshita even manages to make Hara look unappealing: she’s shot and dressed in a manner that highlights all of her physical peculiarities; I’d never before focused on her wide, blocky shoulders or her strangely inelegant man-hands. I kept thinking of Joan Crawford — and that’s not a comparison I make happily. Still, “Lady” is short enough to be an easy sit, and it has a merit that exists apart from its success or failure as a vehicle for entertainment. In particular, its images of a new Tokyo, one emerging hesitantly from war and politely energized by Western influence, have the kind of social documentary value that only the movies are capable of providing.

“Here’s to the Young Lady” is available to stream on Hulu Plus’ Criterion channel.