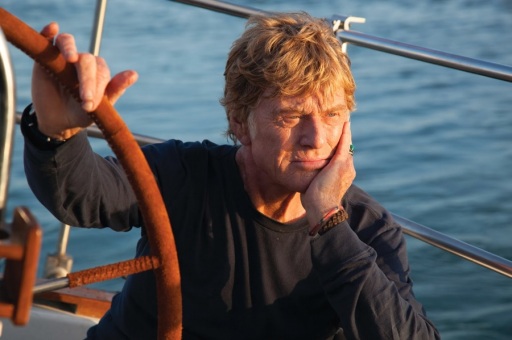 “All Is Lost” is like “The Old Man and the Sea” without the fish. Robert Redford, who in the credits is referred to as “Our Man,” floats around in a damaged boat looking grave and portentous as one damn hardship after another descends from the heavens. Is the movie a comedy of cosmic misfortune or are we supposed to root for this guy? Investing in existential flimflammery, writer-director J.C. Chandor refuses to give the character purpose or clearly defined goals. Odysseus at least yearned for home; Our Man’s too angsty to admit even to that. Though Redford’s struggles seem intended to pit human will against the inscrutability of the universe, his own inscrutability invalidates the equation. Watching him is like watching a hamster spin endlessly on a wheel: you feel bad for the little guy, but then again he’s just a fucking hamster.

A director like Robert Bresson might have succeeded in drawing something out of this material, might have milked transcendence from the details of raw process. What milk there is in “All Is Lost” Chandor merely churns into Oscar butter. The director’s feel for cramped spaces and flinty tonalities isn’t enough to compensate for his failure (or is it unwillingness?) to connect the individual plot points in a way that would give them urgency and meaning. Redford’s climbing the mast to plug in some unexplained doohicky, his flopping beneath the waves to attend to some other doohicky, his futzing with a fritzy radio — all of it lacks the cause-and-effect context needed to generate identification and suspense. This may explain the IMDb reports of audiences laughing at Redford’s predicament: absent suspense, this kind of thing easily slips into comedy. Eventually, Redford’s whipping at the hands of chance seems as ludicrous as the spectacle of Laurel and Hardy repeatedly failing to push a piano up a long flight of stairs. What can you do but laugh?

Though he’s never been the warmest of actors, it’s surprising just how hermetic Redford is here. He looks like human driftwood and he acts like it too, his eyes reflecting near-deadness even as he gives what is, by old man standards, a very physical performance. I fear his resignation, and Chandor’s validation of it, speaks to some larger contemporary malaise, one not transformed by the movie’s final image, in which Michelangelo’s hand of God is appropriated for a banal, Choose-Your-Own-Adventure-style toss-up between surrender and salvation.

Recovering liberal arts major. Unrepentant movie nut. Aspiring boozehound.
View all posts by Fabrizio del Wrongo →
This entry was posted in Movies and tagged A River of Bullshit Runs Through It, All is Lost, Film, J.C. Chandor, movies, Robert Redford. Bookmark the permalink.