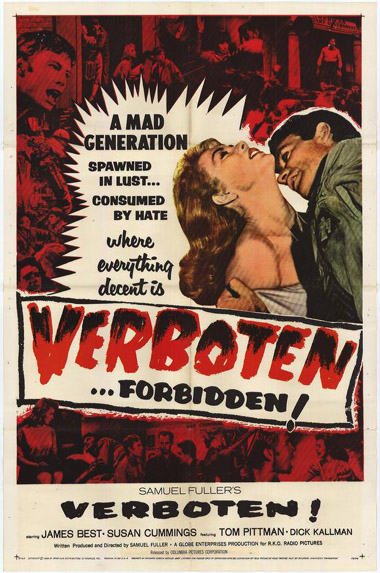 Verboten! is Sam Fuller’s Germany: Year Zero. It’s an astonishing film that surprises at every turn. I love that Fuller doesn’t do anything – in terms both of how he conceives and writes these scenes and of how he shoots them – just because that’s the way other filmmakers would do it. His approach seems to have been worked up from first principles, and so you get drama without all of the built up cruft that usually comes with even the best Hollywood movies. 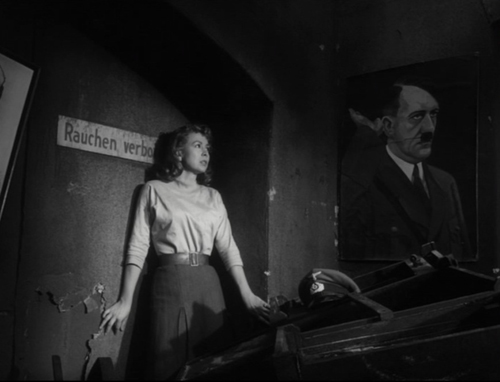 This image gives us the theme: post-War Germans, haunted by Hitler…

In its first twenty minutes it covers the entire terrain of a standard war movie. It’s very anti-Hollywood in the way it refuses to stick to a genre for more than a few scenes at a time. In that sense, it feels downright European, and you can see why the young French critics at Cahiers du cinéma went gaga over this guy: the movie has the punchy, pulpy vitality of American pop culture at its best, but it has a keen, critical intellect behind it that rejects the pat solutions of American pop culture at its most conventional. 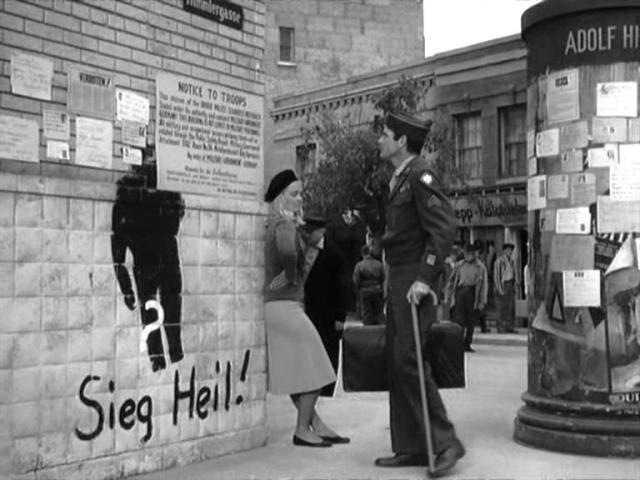 Fuller fills Verboten! with the kind of text-heavy images that would appeal to a guy like Godard.

The opening is as powerful in its stripped down straightforward way as a depiction of what it costs to take ground as is the opening of Saving Private Ryan. But the heart of the movie goes straight to the territory explored by Lars Von Trier in Europa: Nazi hold outs (the terrorist group Werwolf) vs. the occupying American force. 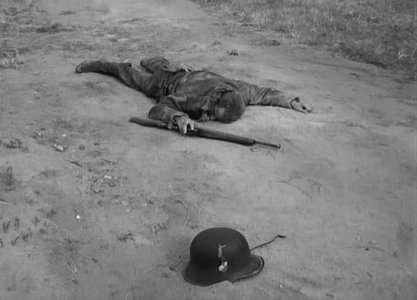 There’s not as much shakey-cam as in the opening of Saving Private Ryan, but the same point is made with a forceful simplicity: taking ground costs lives.

Fuller doesn’t turn this into a thriller, like a lot of the major films dealing with the fate of post-War Europe did (i.e., The Third Man or Berlin Express). Rather: like Rossellini, he wants to show more directly how the war and its aftermath shaped the people of Germany and the American soldiers who defeated the Nazis. Thriller conventions would just get in the way, so he turns to a method that’s closer to a series of slice-of-life vignettes. Albeit, slices from a somewhat feverish, hysterical life. 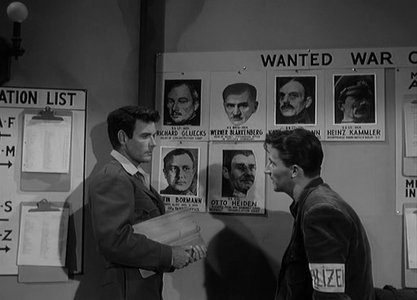 A favorite scene: a relatively quiet one, where the main character (a G.I. who decides to stay behind as a civilian in order to marry a German girl who saved his life during the last days of the fighting) fades into the background, and we see his boss (the head of the American Military Government in a small city) deal with some of the day to day concerns of running a quasi-occupation.

Another great moment: a Werwolf agent provocateur incites a group of starving Germans to riot. When the mob reaches the HQ of the American Military Government, our hero comes out to confront him. The Werwolf guy jeers that the Americans are “Some liberators”, to which our hero replies, seething with anger he can’t control anymore: “Liberators? We’re not here as liberators. We’re here as conquerors, and don’t you forget it!” And then he goes and punches the Werwolf in the mouth. 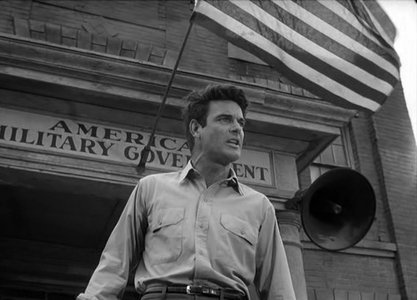 Like Loading...
This entry was posted in Movies and tagged movies, Nazis, Sam Fuller, war movies. Bookmark the permalink.