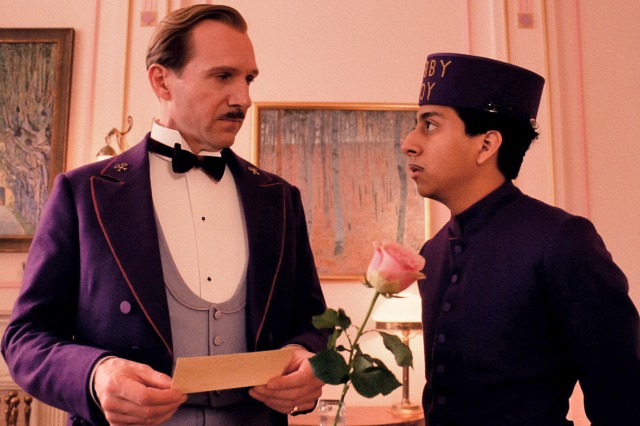 Wes Anderson’s stab at a screwball comedy, watching THE GRAND BUDAPEST HOTEL felt like staring at a wall of hyperactive Swiss clocks. The production design, cinematography, and costumes are simultaneously enchanting and oppressive. The movie it most reminded me of is “300” — so weighted down with design and aestheticism that I felt suffocated. Anderson’s constant symmetrical, centered framing (he even shot the film in the more balanced Academy ratio instead of widescreen) in particular comes off like an Aspie-OCD tick. Along with his use of zooms it flattens the space and makes the film resemble a children’s storybook, admittedly a plus or minus depending on your POV. To ornament even further the narrative is actually a story-within-a-story, like Russian nesting dolls. I empathized with Anderson’s hipster-fin-de-siecle sensibility but I was never involved with the Ralph Fiennes character, here playing a hotel concierge and gigolo who gets involved in a murder mystery, or his relationship with the lobby boy played by Tony Revolori. The film is ostensibly about the decline of civilization, but the hotel is just as stylish (from Belle Epoque to Bauhaus) at the end of the movie as the beginning, so what exactly was lost?

Although I didn’t respond much to the movie, Sax did, so allow me to turn the floor over to him.

Wes Anderson’s INGLOURIOUS BASTERDS: Civilization — and not just Civilization but the most ephemeral artifacts of civilization (perfume, romantic poetry, paintings, good manners) — as our only real bulwark against Barbarism, riddled throughout with a melancholy suspicion that that might not be enough. I think, like Anderson’s last two live actioners (DARJEELING LTD and MOONRISE KINGDOM), that it’s a great movie and something that I’d call a masterpiece if I didn’t think that that word is slightly inappropriate. Not because the movies aren’t great — I think they’re among the greatest contemporary American movies — but due to Anderson’s deliberate holding back, a defensive push-pull that drives him to undermine these perfectly choreographed and art directed moments, as if he’s the Marquis de la Cheyniest sabotaging his own prized clockwork toys. It’s a movie that wants to believe in masterpieces but retains a painful sliver of skepticism. Anyway, in these last three movies, Anderson shows himself to be the heir of the great Hollywood auteurs of the 30s (mainly Lubitsch, Von Sternberg, Hawks, but also, in MOONRISE KINGDOM, Walsh), but a true 21st-Century American Renoir.