It was recently announced that LOS ANGELES PLAYS ITSELF, the previously difficult to find film essay written and directed by Thom Andersen, is finally being released on video. Although completed in 2003, the documentary about Los Angeles’ portrayal in Hollywood movies was only screened at film festivals and special events because it was thought too expensive to legally clear the 200+ movie clips in the film. The IP issues seem to have been addressed, though, so the documentary will be available commercially this September.

Via  completely legal means, I finally caught up with the almost three-hour long film that some have called the best documentary about Los Angeles ever made.

It’s an impressive work, the documentary equivalent of a lushly illustrated coffee table book with an academic text that’s by turns enlightening and aggravating. A graduate of Berkeley in the early 60s and a film professor at CalArts, the wry and laconic narration written by Andersen is delivered by Encke King. Andersen divides the film into three sections — City as Background, City as Character, and City as Subject.

The first section, City as Background, allows Andersen to air a number of peculiar complaints. 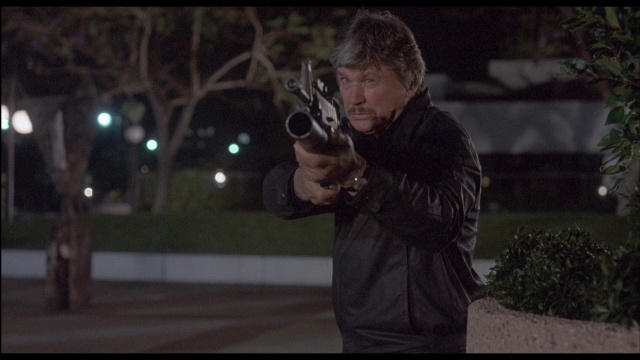 More significantly, Andersen objects to “geographic license,” cinematic depictions in which interiors are spatially unrelated to exteriors or anytime when filmmakers play fast and loose with locations. Even fake addresses and phone numbers earn his scorn. Andersen admits that “it’s hard to make a theoretical case against it” but “like dramatic license, geographic license is usually an alibi for laziness. Silly geography makes for silly movies.” Two examples he gives of such silly movies are COBRA (1986) and DEATH WISH 4 (1987).

I’ve seen neither of those films so perhaps they are silly, but it’s hard for me to believe that geographic laxity has anything to do with it. Why should anyone care if a character exits a building and appears in a public square fifteen miles away, as happens in DEATH WISH 4, so long as the internal logic of the movie world is maintained? Would the film really be more palatable to Andersen if the filmmakers were able to maintain geographic realism? Given the movie’s neo-fascism and Andersen’s progressive politics, I highly doubt it. It’s odd to expect a vigilante fantasy to conform to any kind of naturalistic standard.

But Andersen’s gripe with geographic license is nothing compared to his disdain for Hollywood’s treatment of L.A.’s modernist architecture. “Some lies are malignant. They cheapen or trivialize the city,” the narrator intones. “Hollywood movies have almost systematically denigrated this heritage.” Indeed, Andersen was inspired to make this documentary after being disgusted by the treatment of Richard Neutra’s Lovell House in L.A. CONFIDENTIAL (1997) where it was used as the residence of a powerful pimp and pornographer. Andersen patiently explains how Neutra’s design was influenced by Le Corbusier’s dictum that homes are “machines for living” and that the residence hosted meetings of political radicals in the 1930s.

He also objects to Hollywood’s alleged negative attitude toward architect John Lautner, particularly his Chemosphere and Garcia Residence, the latter’s destruction in LETHAL WEAPON (1989) being “the ultimate insult”. And, horror of horrors, postmodern architecture is “trashed” in DIE HARD (1988). 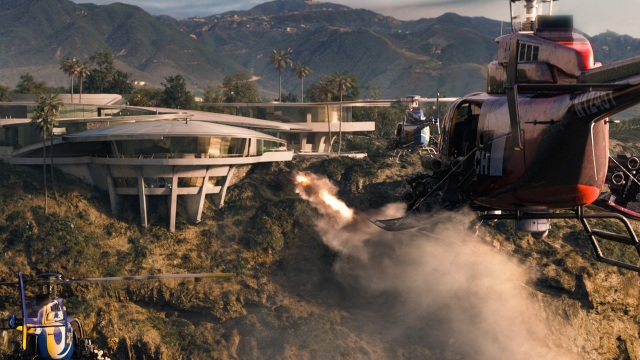 Even if many modernist houses double for villain lairs, it’s difficult to argue that such use denigrates the buildings or builders in any meaningful way. It’s not as if the supposed sustained Hollywood campaign against brutalism and its cousins has resulted in a groundswell of support against concrete or glass-clad structures. Quite the contrary. Benedikt Taschen lives in the Chemosphere, his publishing company and others produce handsome volumes honoring Neutra and Lautner, while for decades modernism and postmodernism have stubbornly retained their place at the apex of architectural prestige.

Besides — what’s so wrong with hating modernist buildings?

Perhaps Andersen was heartened that Marvel’s Iron Man franchise seems to have a soft spot for chic contemporary buildings. In IRON MAN (2008), Frank Gehry’s Walt Disney Concert Hall is the setting for a glamorous charity event thrown by hero Tony Stark. In IRON MAN 3 (2013) the filmmakers created a Lautner-inspired concrete compound for the hero on Malibu’s Point Dume. (Yes, Stark’s home was destroyed but it is a comic book movie after all — massive CGI destruction is a genre requirement. Half of Manhattan was reduced to rubble in THE AVENGERS.) Indeed, as Steve Sailer pointed out, given how often his buildings have been used it’s just as accurate to say Hollywood has love affair with Lautner.

In the second section of the movie, City as Character, Andersen does a fantastic job of assembling films both famous and obscure to outline the evolution of the city. Old movies have a number of charms and one of the greatest is the documentary aspect that lets us peek into the past. I particularly liked the section on Bunker Hill, an area of downtown L.A. that once housed Arturo Bandini but now hosts pomo baubles. It’s startling to watch it transform from a middle-class enclave in CRISS CROSS and SHOCKPROOF (both from 1949) to a neighborhood of sketchy Victorian boardinghouses in KISS ME DEADLY (1955) to a downbeat but still thriving district in THE EXILES (filmed in 1958, completed in 1961) before ending up as a desolate wasteland in THE OMEGA MAN (1971). 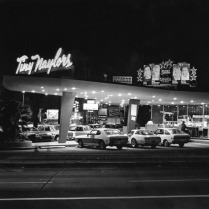 Andersen also notes films that preserve photographic evidence of demolished L.A. landmarks like Ships and Tiny Naylor’s. Googie coffee shops have been a staple movie location since the style was pioneered in the late 40s by — wait for it! — John Lautner. Quentin Tarantino used a Googie-style coffee shop (the Hawthorne Grill, now gone) memorably in PULP FICTION (1994). The Norms on La Cienga in West Hollywood was featured in the Coen Brothers’ INTOLERABLE CRUELTY (2003) and as a respite of male bonding in the recent TV series MEN OF A CERTAIN AGE (2009). It’s telling that Andersen, a committed leftist, chooses to focus on Lautner’s elitist, patrician residential commissions as opposed to the architect’s more democratic, plebeian, and influential commercial projects. 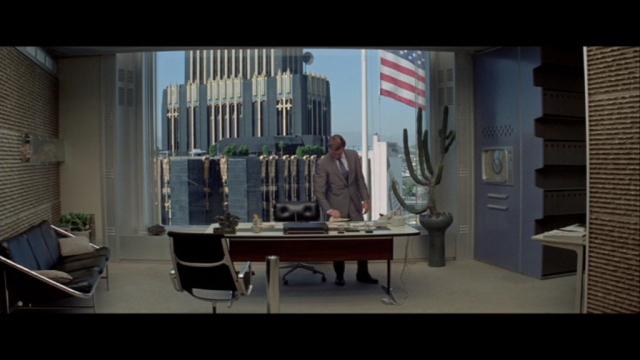 ZABRISKIE POINT (1970) provides one of the few film records of the dearly departed Atlantic Richfield Building, a black and gold art deco gem captured by Antonioni shortly before it was razed in 1969. Andersen states the Richfield was replaced by “taller, uglier” buildings but omits showing them. The frame below from Michael Mann’s THIEF (1981) shows the Richfield’s successors, then named the ARCO Towers, looming ominously. As for them being “ugly” — why, doesn’t the mathematical simplicity and rational austerity appeal to Andersen’s modernist eye? How dare he denigrate L.A.’s architectural heritage!

Incidentally, Mann really likes this stretch of Figueroa Ave and those awful towers. He returned to them fourteen years later for the bank robbery scene in HEAT (1995).

In the final section of the film, City as Subject, Andersen shows how L.A.’s real history parallels and deviates from its filmic one. There’s a section on water in CHINATOWN (1974), transportation in WHO FRAMED ROGER RABBIT? (1988), the LAPD and decline of Mexican-Anglo relations in AMERICAN ME (1992), and the defeat of public housing in the early 50s due to opposition from suburban developers.

It’s here that Andersen’s political convictions ring through the most clearly. He rejects what he sees as the easy, hip cynicism of CHINATOWN, BLADE RUNNER (1982), and L.A. CONFIDENTIAL. He quotes from Pauline Kael’s BLADE RUNNER in which she criticizes Ridley Scott for taking the futuristic hellscape for granted but never asking “How did this happen?” “The picture treated this grimy, retrograde future as a given — a foregone conclusion, which we’re not meant to question,” wrote Kael. Instead, Andersen lauds KILLER OF SHEEP (1979) and BUSH MAMA (1979), neorealist works that focus on the “incremental genocide against [L.A.’s] expendable ex-slave population” as it struggled against racism, the LAPD, and economic decline.

I’ve never cared for SHEEP but instead of ending on a note of discord I’ll finish by enthusiastically agreeing with Andersen’s assessment of THE OUTSIDE MAN (1972), which he calls perhaps the most “precise portrait of the city.” Directed by Jacques Deray and co-written by Deray and frequent Buñuel collaborator Jean-Claude Carrière, Jean-Louis Trintignant is a French assassin summoned to L.A. to kill a crime boss but soon finds himself the target. Trintignant, playing a cross between Lee Marvin’s Walker and Alain Delon’s Costello, cooly deals with housewives, bratty children, bikers, Jesus freaks, hookers, and other gangsters while only being slightly bewildered by early 70s L.A. grubbiness in the form of Beverly Hills, the Sunset Strip, downtown, and Venice Beach. Available for rental on Amazon, it’s a wonderfully low-key yet engaging crime thriller and valentine to the city.