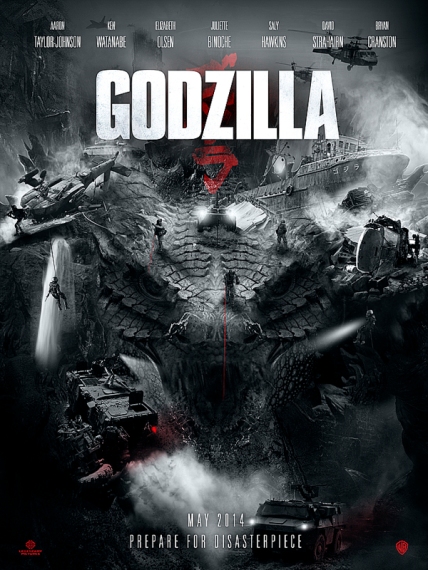 The disaster film — which I think includes the giant monster film — has long been a venue for plots that encompass multiple characters, motives, and locations. One of the genre’s pleasures lies in our appreciation of how these parts fit together and click. “Godzilla,” though, is a mess of parts in search of a plan, a utility. Nothing connects or adds up, and the screenplay pulls in locations and human interest elements like a drain pulls in bits of stray rubbish. One such bit: A family on whom the picture spends its first 45 minutes. Because their fortunes yield almost no emotional or narrative payoff, both they and the long introduction end up feeling vestigial. Colorful characterizations might have redeemed the opening. But director Gareth Edwards gets a waxen performance from Bryan Cranston in the role of a truth-telling scientist. In the case of Aaron-Taylor Johnson, who plays Cranston’s son, there may be no performance worth getting. Physically, the actor suggests Elijah Wood — if he finally hit puberty.

The tone of “Godzilla” is heavy and portentous, the running-time is over two hours, and the palette is a muted blue-gray, as in a Christopher Nolan film. These are decisions intended to convey seriousness — that the goofball concept has been drained of pop frivolity. The original “Godzilla,” released in 1954, was a justifiably solemn affair, but solemnity seems misapplied here, to what is a modern, CGI-laden spectacular. Why is Hollywood so eager to turn comic-book premises into grinding exertions? Is it too much to ask that a movie about giant monsters be in touch with its own ridiculousness?

The picture’s faux seriousness is compounded by references to recent disasters. The 2011 tsunami, Fukushima, and 9/11 all get nods. (In a way, so does Pearl Harbor.) This isn’t new to the franchise: The original monster was the product of atomic testing, his rampage a nightmare echo of Nagasaki and Hiroshima. This new Godzilla, while still an upshot of the Bomb, has been recast as an agent of cosmic chaos. He’s returned, we’re told by a lost-looking Ken Watanabe, to smite the human race for its hubris. (Watanabe has all the duties of Jeff Goldblum in “Jurassic Park,” and none of his good lines.) While this might explain the earthquake and tsunami references (what major earthquake isn’t interpreted as payback for our follies?), it can’t redeem those to 9/11, which come off as weak jabs at topicality.

None of the the movie’s rotely expressed themes connect to its plot, which has the G-Man doing battle with a pair of adversaries known as MUTOs. Like their nemesis, the MUTOs are prehistoric giants bent on destruction, and they’re intimately connected to weapons of mass destruction. I kept wondering: How, in thematic terms, do the MUTOs differ from Godzilla? If Godzilla is an agent of chaos, are the MUTOs agents of . . . superduperchaos? And why are the two parties fighting? It seems they should be on the same team, united in an effort to teach those upstart humans a lesson.

Truth be told, for the movie’s first half I was under the impression that the MUTOs were Godzilla, or at least a larval form of our hero. Partly, my confusion can be chalked up to the muddled plotting, which had me muttering things like, “Wait . . . which giant monster’s doing what now?” But it can also be attributed  to the effects work, the darkness of which makes the digital goliaths hard to distinguish. Presumably, that darkness helped to conserve effects dollars. That’s fine; they can blow their budget wad on the sequel. But what’s the point of a monster fight if you can’t tell who’s monstering whom? I didn’t much care for last year’s “Pacific Rim,” but credit Guillermo del Toro and his team for their clever employment of bioluminescence. Those glowing blue and red highlights helped establish a look that fell somewhere between the Los Angeles of “Blade Runner” and a really balls-out deep-sea documentary. “Pacific Rim” is an example of an effects-driven movie that uses darkness to its advantage. Godzilla, by contrast, is affected by a murkiness that defeats spectacle.

That’s too bad, as Edwards has a keen sense for scale and a gift for putting across gleefully exaggerated moments and images. (This is one area in which he has del Toro beat.) Godzilla’s first apperance is dramatized through a vignette showing a young girl searching for her dog. Edwards allows the tension to build slowly, and his toggling between micro and macro story elements has an effect that’s almost comic; it’s a bit like something out of “Jaws.” (Edwards is apparently a Spielberg fan: The last name of the Cranston character is Brody.) Most of the picture’s best moments are highly pictorial genre staples: A flashy expository montage is witty and light on its feel in a way the rest of the movie isn’t, and a showdown between Godzilla and the military atop the Golden Gate Bridge has the pop hyperbolism of Richard Donner’s Superman films. I also loved one of the movie’s grace notes: a shot of the face of Juliette Binoche — she plays Cranston’s wife — being slowly eclipsed by radiation doors as she’s forever separated from her husband. A tragic-romantic image in the mode of Brian De Palma, I suspect I’ll remember it long after I’ve forgotten that Binoche was even in “Godzilla.”

Edwards has a background in digital effects, and it’s possible that narrative and character are simply not among his strengths. It’s also possible that his conception of movies is different from mine — that he’s been bred on video games and effects panoramas rather than on traditional cinemah. This, I suppose, is wholly my problem; I fear I’m outside the target demographic for this kind of movie. Certainly, there’s no denying that I find it hard to identify with the characters in contemporary blockbusters. The filmmakers at the helms of these projects often seem to approach movies not as engines for generating identification (that is, of the old, Hithcock-style sort) but as platforms for running boffo simulations. This might explain why modern CGI extravaganzas are so lacking in suspense even while they’re filled to overflowing with visual-auditory bluster. In “Godzilla” there’s no particular viewpoint with which to identify; we gawp at the monsters over the characters’ shoulders without ever participating in their awareness. In fact, “characters” might be the wrong word. “Avatars” is better. Jim Cameron, I think, was onto something.