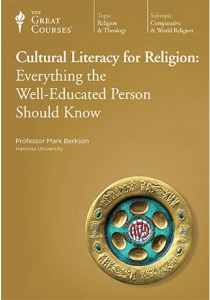 I enjoyed Mark Berkson’s hyper-basic (one-half to four lectures per major religion) Great Courses series very much. My beefs with it first, but only because complaining is so much more fun and easy than praising. It wasn’t the anthropological lecture series of my dreams. I’d have enjoyed some looks at animism, tribal beliefs, and Egyptian, Mesoamerican and Mesopotamian religions, as well as a few tours through the main ongoing debates over what’s a religion and what’s not. Is our current regime of multiculturalism / feminism / diversity / PC / neoliberalism taking on some characteristics of a religion, for instance? (I sure think so.) The course’s worthy “If only we understood each other we’d get along better” framing struck me as pretty silly. Why shouldn’t intellectual curiosity be understood to be reason enough to justify going through such a series? And, perhaps predictably, Berkson’s treatment of Islam seems as concerned with preventing listeners from hating the religion as with presenting and explaining it. Berkson in fact seems to have intended his Islam lectures as a corrective to some imagined wave of anti-Islam vindictiveness. Since despite checking the news most days I’ve remained unaware of the angry mobs in the U.S. that are apparently clamoring for attacks on Muslims, I did roll my eyes a few times during these particular lectures.

OK, it’s a pretty earnest experience. But, all my ungallant carping to one side, I also found it to be a super-clear and very informative series of talks. If you’re like me, you’ve run across 3/4 of this material before but only in a scattershot, higgledy-piggledy fashion. Berkson lines it all up in very easy-to-digest order. He speaks clearly and well; he has a lot of enthusiasm as well as a major gift for organization; and he supplies just the right amount of historical context-setting to make the beliefs, dogmas and developments comprehensible. And for what the course wants to be he gets the generalization-level just right. That strikes me as a very big accomplishment. (A writerly note: It’s fascinating how the demands of speaking hyper-basically can — somewhat paradoxically? — make a person come up with interesting things to say, as well as interesting ways of saying them.) For a few minutes, my head felt very clear, and that’s something I’m always very grateful for. Verdict: A first-class (if slightly, and forgivably, square) shot at Major Religions of the World 101.

Onetime media flunky and movie buff and very glad to have left that mess behind. Formerly Michael Blowhard of the cultureblog 2Blowhards.com. Now a rootless parasite and bon vivant on a quest to find the perfectly-crafted artisanal cocktail.
View all posts by Paleo Retiree →
This entry was posted in Books Publishing and Writing, Education, History, Philosophy and Religion and tagged Great Courses, lecture series, Mark Berkson, religion. Bookmark the permalink.

25 Responses to “Cultural Literacy for Religion”