A return to my ongoing project of documenting what I think of as architectural “crap space” — bits (as well as sometimes, alas, huge stretches) of our designed-and-built environment that have zero life whatsoever.

First off, I’d like to admit that I have an agenda, and I’d like to spell it out. Whether something we call “life” is present or not in a cultural creation hardly qualifies as a technical, let alone a quantifiable, matter, yet — especially where buildings, neighborhoods, towns and cities go — it’s something just about anyone with common sense can detect.

Pushed to the wall, in fact, I’d argue that the presence or absence of life may well be the most important factor where any cultural creation goes. Life — or maybe better “livingness” — can be a debatable thing, of course, especially when put under a microscope and fought-over by sophists, cynics and opportunists. But, as far as I’m concerned, that isn’t a reason to ignore the question — let alone to dismiss it as as a laughably woo-woo thing — but to discuss it in an ongoing way. Why? Because the presence of livingness promotes and attracts further life, while the absence of livingness depresses and repels further life. Yet it seems to me that 90% of discussions about culture fail to wrestle with this basic livingness-or-not question. Instead they either fall into the trap of discussing indisputable things — brilliance, flashiness, efficiency — or they tumble into relativity and subjectivity of the “well, I dug it, but you may not” sort.

I’ll get to the snapshots after making one further point, which is that, while livingness’ presence or absence might be, in some cases, rather debatable, in other cases it’s hyper-obvious. Hence my focus here on crap space. Plus, hey: maybe there’s something to be learned from examples where livingness is flagrantly absent.

So here’s today’s carefully curated selection of crap space. What are the giveaways that this space — a stretch in front of a Manhattan apartment building — lacks livingness? And what are the factors that contribute to this non-livingness? If this space could talk, what would it be saying to you?

One reason this space seems dead is that, despite a perfectly pleasant day, it’s unused. Another is that its intended purpose seems rather hard to grasp. What did someone once imagine the benefit or the point was of emptying out all this square footage? 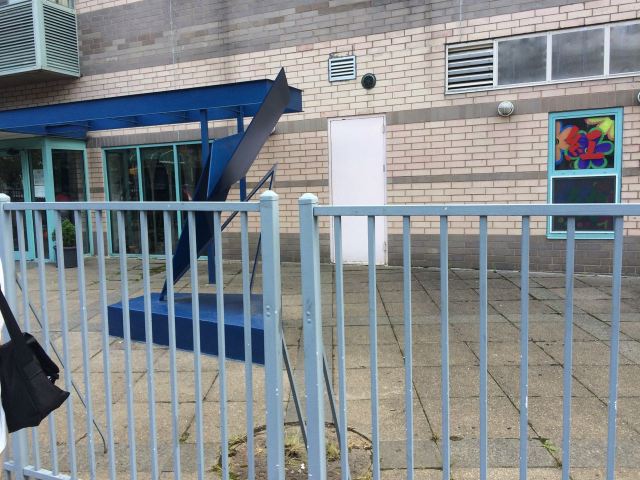 To my mind the ugly/cheery blue metal fence radiates half progressive elementary school and half country-club prison.

If you’re at all like me, the blank white utility door and the ventilator grille above it scream “Avoid this space.” And isn’t it interesting how often lifeless empty spaces feature an abstract modernist sculpture at the middle of them? Could it be that approaching urban space and form as though they bear (or should bear) any relationship whatsoever to contemporary art galleries is just a flat-out bad idea? 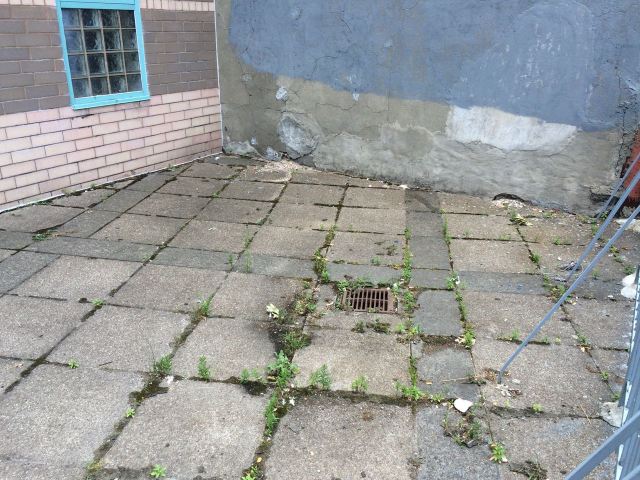 Not hard to see the lifelessness here. Cracked and stained concrete, a ripped-off stretch of the neighboring building’s side wall (which was obviously never intended to be put on display), and a general ashtray/garbage-pit-like atmosphere prevail. All for what? What has been gained by the designer and the developer having pulled their building 15 or so feet back from the sidewalk? General building-in-a-city rule: unless you have a very good reason to do otherwise, always build your structure out to the sidewalk.

Where our cities, blocks, neighborhoods and buildings go, why do we go on repeating the same simple mistakes? And why is the modernist design-and-development establishment as devoted as they are to refusing to learn from the past?

Onetime media flunky and movie buff and very glad to have left that mess behind. Formerly Michael Blowhard of the cultureblog 2Blowhards.com. Now a rootless parasite and bon vivant on a quest to find the perfectly-crafted artisanal cocktail.
View all posts by Paleo Retiree →
This entry was posted in Architecture and tagged architecture, crap space, New York City. Bookmark the permalink.