Music for a Political Blizzard

If you want real good plain old fashioned blizzard music, Blowhard Esq. is spinning a nice track on his show.  Baby, it’s cold outside.  Here, it’s Politics Saturday and this goes out to my son, a Sanders supporter.

As an ad, I mean.  For me at least it is effective. But like the author of the article linked to above I am an aging Boomer sap and so the use of Simon and Garfunkel’s America was inspired.  But it is also telling in interesting ways.

I was about your age–a few years younger, a freshman–when that song came out on the album Bookends.  It was one of those generational anthems.  But an unusual one.  A lot of generational anthems were heroic–the valiant Woodstockers/radicals would triumph over the aging WW2 generation, or were bravely fighting its many oppressions, or were a transcendent mutation arrived to bring a new consciousness.

Tin soldiers and Nixon coming,
We’re finally on our own.

America where are you now?
Don’t you care about your sons and daughters?
Don’t you know we need you now
We can’t fight alone against the monster

Or The Fifth Dimension’s The Age of Aquarius

The America in these songs is a complicated proposition.  Sometimes it is the older generation itself that is the problem.  The Age of Aquarius would sweep all those old-fashioned things out of the way.  Sometimes the idea of America was still strong but had become corrupted by tin soldiers or the war machine.  Seldom was it the case that America was taken straight up, and engaged with on its own terms.

The Simon and Garfunkel song did that (*or maybe not–see post-postscript below).  And so it is appropriate in a way that, say, Joni Mitchell’s Woodstock could not be, with all of its going on about children of god walking down the road, all stardust and golden.  America is not out to change America.

But what’s also interesting about Simon and Garfunkel’s America is how unheroic it is.  Alienated, even.  Not that it was out of place in its time.  The adolescent lovers running off on a bus with no idea where to go or why they are going is redolent of nothing more than the last scene of The Graduate, which was released around the same time.  And there’s a connection there, too: Mike Nichols used the Bookends song Mrs. Robinson in the soundtrack to the film.

The lovers in America find themselves hurtling down the New Jersey Turnpike in search of an America they have no real idea of.  And the narrator is, as he sings, “empty and aching and I don’t know why.”

Let us be lovers,
We’ll marry our fortunes together.
I’ve got some real estate
Here in my bag.

So we bought a pack of cigarettes,
And Mrs. Wagner’s pies,
And walked off
To look for America.
“Kathy”, I said,
As we boarded a Greyhound in Pittsburgh,
Michigan seems like a dream to me now.

It took me four days
To hitch-hike from Saginaw.
“I’ve come to look for America.”

Laughing on the bus,
Playing games with the faces,
She said the man in the gabardine suit
Was a spy.

I said, “Be careful,
His bowtie is really a camera.”
“Toss me a cigarette,
I think there’s one in my raincoat.”
We smoked the last one
An hour ago.

So I looked at the scenery,
She read her magazine;
And the moon rose over an open field.
“Kathy, I’m lost”, I said,
Though I know she was sleeping.
“I’m empty and aching and
I don’t know why.”

So now, this parable of alienation has been transformed by politics into one of patriotic inspiration.  Of course, some cutting was required and not only for the sake of brevity.  The Sanders ad includes the lines about counting the cars on the New Jersey Turnpike but it does not include the “empty and aching” line.  Moreover, the suggestion in the lyrics is that all of those cars on the Turnpike are probably filled with other empty and aching individuals “all come to look for America”.

That’ll get you into a ballot box right quick!

Whether it works for all, or most, or the right people politically, is being decided as we speak.  It’s mud wrestling now, with progressives making the charge against their tribune that the ad is too white, with Hillary’s surrogates jumping in to inflame, with Sanders arguing back that Hillary should be ashamed of such tactics, with the right lampooning the ad, and so forth.

What can I say?  This is just the best political season ever.

Hell, if you’ve gotten this far let me recommend you go to the comments section to check out two shrewdly observed comments by agnostic.  In one he takes up the issue of how most of the ostensible action stirred up by the boomers was mostly the work of the so called Silent Generation before them, with the boomers characteristically taking the limelight and the Silents shunning it.  In the other he takes up the important issue of Trump-Sanders convergence.  His conclusion:

No doubt Sanders is playing on the homeland themes that Reagan and others, typically Republican, have mined so successfully over the years.  But where else might we have seen that kind of energy this election year.  Could it be . . . Trump?

The Trumpian right wing sites are all lit up today over the bad National Review taking up an entire issue to bash Trump as a fake conservative.  And that he is.  Not for nothing the party leaders are warming to him more rapidly than Cruz.  He’d do a better job hanging on to the Reagan Democrats.  Here’s an angry mom straight out of the Bernie ad, ripped at the GOP for condescending to regular people.

These people are in play.  agnostic says Trump will lead them and not Bernie.  I suspect that is right, net net.  But Sanders’ video was intentional, as most things are in the scripted and spun worlds of drama and politics, and I think it is aimed at middle America by way of progressives, the way Trump is aiming at middle America by way of the Right.

Another thing is worth noting about the Sanders video.  Sanders’ side can express outrage today that Hillary’s surrogates would attack it for being too white.  But surely they saw the whiteness of the ad, in both skin coloration and ideation, when they decided to run it.  Why would they have done so, knowing full well that they would be attacked from the identity politics side, and that even the Washington Post argues that black votes are Hillary’s firewall?

Maybe it is bad politics.  Maybe Sanders and his followers are just so much who they are they they are incapable of being someone else.  But it is also possibly the case that Bernie is sending a general election message out here: I do not buy the identity politics stuff that my side has forced on me.  Black votes may be needed for the nomination but identity politics seems like a loser to me in the general.

Sorry.  One last thing about America and America.

I have carried what I think to be the standard interpretation of that song around with me for almost 50 years–two drifters off to see the world, with no destination and no plan to get there.

But maybe not the more I think of it.  Consider the narrator starting out in Michigan, catching a bus in Pittsburgh and then counting the cars on the New Jersey Turnpike.  He starts going south, since heading south rather than north is the standard escape route for all wanderers on the run (“we can make the Mexican border . . . “).

But he catches a bus in Pittsburgh and ends up in New Jersey.  Why would he go east from Pittsburgh to New Jersey if his destination were further south?  He’s probably headed to New York City, Paul Simon’s home.  That’s where the song is pointing; that’s where he’ll golightly to find his new home.

Looked at this way, America is the sung version of that Saul Steinberg New Yorker cover.  There’s nothing happening out there in the wasteland.  To find yourself, and to escape that empty and aching feeling, you have to come to the Big Apple.  So much for America. 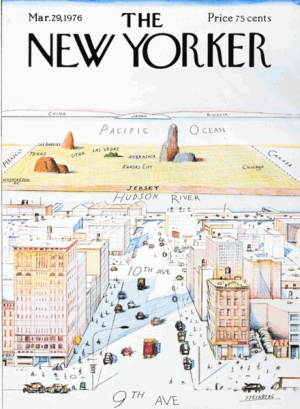 Gainfully employed for thirty years, including as one of those high paid college administrators faculty complain about. Earned Ph.D. late in life and converted to the faculty side. Those damn administrators are ruining everything.
View all posts by Fenster →
This entry was posted in Music, Politics and Economics and tagged Bernie Sanders, Political Ads, Sixties. Bookmark the permalink.

12 Responses to Music for a Political Blizzard