Occupied (or Okkupert in the original) is a Norwegian mini-series, a 10-part political thriller on the subject of a Russian occupation of Norway.  With a budget of $11 million, it is the most expensive mini-series to be produced in Norway, and it made quite a splash there when it aired.  It made a splash, too, in other places, especially upsetting Russia.

It is based on an original idea by the Norwegian novelist Jo Nesbø, author of the Harry Hole detective series and the quite entertaining stand-alone thriller Headhunters, which was made into a film of the same name.

Occupied, which is available on Netflix streaming, is a really interesting production.  Spoiler alert from here.

Norway’s Green Party has come to power and looks to lead the world in the development of clean energy.  Its development of efficient thorium reactor technology, which it plans to make available to the world, ought to be good news.  But its clean energy plan involves shutting down its abundant oil and gas production on which the EU depends.  The Prime Minister, Jesper Berg, naively thinks the EU will be happy to wean itself of fossil fuel in favor of thorium but the EU sees the situation differently.  They want the oil to flow uninterrupted.

The EU sends Berg a private, direct and brutal message: turn the oil back on or face invasion.  Berg is told to assent to Russian “assistance” in getting oil and gas production back on track.  Berg agrees since, in addition to being a Green he is also an instinctively peace-loving Nordic type.  War would be unthinkable, and Russian “assistance” must be preferable to an invasion that Norway would not be able to fend off.

What happened then? Well, that’s the play and he wouldn’t want us to  give it away. Not Jesper.

Suffice it to say that what starts quietly as an almost imperceptible quasi-invasion morphs into the real thing, quomplete with quislings.  By the end of episode 10 we are right at the cusp of an armed conflict that is all but certain.  A second season has been greenlighted but we will have to wait quite some time before we find how the armed conflict and resistance play out.  Along the way we watch as Norway comes to grip with the need to set aside its reflexive peace-loving ways and deal with the reality of conflict.

There is an interesting geopolitical side to the story. Usually, it is America that is trotted out as the shining example of a helpful big brother with more sinister intentions.  That’s a cliche at this point, and almost beneath mention.  But here the bad guys are the EU and Russia.  The US, which according to the plot has withdrawn from its role as European protector (perhaps after the election of an isolationist president?), does not get to play the villain for once.  Sure, it shows a serious lack of spine but it is not the main instigator for the dirty deeds.  That’s the EU and Moscow.

Russia was seriously unhappy with the series.  While the EU brings Russia in to get the energy flowing again,  once they are in place the Russians show themselves to be the really bad actors, using every trick in the book to move toward complete control.

I am not sure how to read this plot device.  For the record, Nesbø says that he had no political point to make in his selection of bad guys.  Norway shares a border with only three countries–Russia and the peacenik duo of Sweden and Finland.  Who is the better invader here?

Could be his intention was to make a neutral statement.  But fiction about real things always collides with the real things, and comparisons will be made. And the idea that Russia up to no good is certainly in the air in the Putin era, so the fear of Russia plot angle may not just be happenstance.  Making the EU the actual instigator, however, seems to me pretty provocative, and it is hard to escape the impression that this plot point was more than just a matter of good drama–on which more below.

To me, though, the most intriguing thing about the show is not the geopolitics but the local politics.  Norway is a small and peaceful country,  wealthy on relative basis from oil but no match for Russia in terms of military might or martial attitudes. 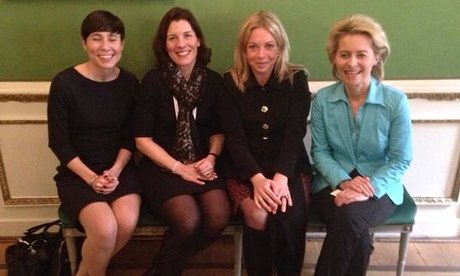 Back to real life: defense ministers from Norway, Sweden, Netherlands and German

and their Russian counterpart

How will it respond to a subtle invasion downplayed by the green PM and pitched to the public as “assistance”?

When the Russians first arrive it is as though they are not there at all.  No one seems to mind or care.  Some, like the Prime Minister, wish to avoid war and think that a strategy of buying time makes sense, letting the Russians get the energy flowing again while continuing to sell the thorium concept.  Others have an interest in Russian money flowing to Norwegian pockets.  Others are so committed to Western values like the rule of law that they cannot envision a situation in which saving those values means putting them aside for a time.  Most are just happy enough with the lives that they have a hard time seeing past the borders of it, or recognizing its fragility.

But as the Russians become bolder and their intentions become harder to deny, a Free Norway movement eventually arises.  But the idea of a resistance that includes actual  fighting has no wide traction.  So the people who are willing early on to join an actual Resistance are truly cutting edge–singular characters, quite atypical. Given their small numbers at first and the huge challenges they face to create change, their first acts must be dramatic, and are perceived by many Norwegians as terrorists.  Decisively so, in the minds of many.  But the dialectic has just started.

Many of the good people of Norway are faced with a dilemma.  The growing sense of oppression becomes harder for many Norwegians to ignore but the only forces actually pushing back are hardly nice Norwegians–not nice at all.  And they challenge both the values or interests of many in the Norwegian public.

As I was watching the series I happened to be reading the book Violent Politics, by William R. Polk.  Polk’s book is a history of insurgencies “from the American Revolution to Iraq.”  Polk’s argument is that all insurgencies follow a similar path.  They start with an invasion or some other challenge to the identity of a cohesive group, whether nation, culture or tribe.  At first only a tiny number of individuals fight back.  They are small in number and typically poorly armed but they are dedicated and zealous.  They are not nice people by a conventional definition, and they often start with terrorist acts.

As they start to take action, a number of contradictory things are set in motion.  More and more people are attracted to the cause but there is typically a high degree of resistance to their methods even among the people they are attempting to win over.  Polk describes General Washington’s disgust at the kind of person fighting for American independence in loosely organized militias, and he was ever attempting to squash them in favor of a decent regular army, one that would be willing to fight fair, under European rules of engagement.  In Polk’s view that would have been a disaster–in fact Polk argues that were it left to Washington the war would have been lost since a conventional American army would have been no match for the British.  It took the nasty guys to create the change, and to force the population to make a choice.

Polk describes a kind of dialectic, with the initial brutality of the insurgents creating contradictory responses among the populace.  When the insurgency is done “right”–that is, when conditions are favorable and when the insurgents manage the dialectic effectively–the result can be a twisting road to victory.

The Norwegian insurgency follows Polk’s classic pattern perfectly–a textbook case of how to do it right.  At least up til the end of episode 10.  We don’t know if war will take place and how it will be conducted.  If Polk is right Nesbø will have his work cut out for him in season two.  Under Polk’s account it will be hard to portray a Norwegian victory as glorious in any traditional sense, and the brutality on both sides will need to continue.

What is really odd about this, though, is not the process itself.  Polk sets out the model and the Norwegian insurgency follows it. No, what is head-scratching about it on TV is that it is about nationalism.  Nationalism!–that despised thing that was responsible for two world wars and that must be crushed at all costs.  As the plot in Occupied progresses we see one character after another struggling to stop the inexorable movement to war, only to come to a hard realization.  The Prime Minister.  The restaurant owner with a Russian clientele.  The judge who resists violence in the name of the rule of law.  Each one reaches a moment when, after long denial and struggle, the realization hits suddenly like a flash–I am Norwegian!

The viewer is reminded of course of the many parallel situations that can evoke different emotional reactions or partisan sympathies: the  American Revolution, the Vietnamese resistance to foreign rule, the Israeli-Palestinian conflict, ISIS.  But while Polk’s model may work as description, explaining how things happen when certain conditions apply, it may not work as well as prescription, offering a guide for right and wrong, or suggesting that the insurgents always own the moral high ground.

So is Nesbø making a universalistic claim about right and wrong, a particularistic claim good only for and about Norway, a subtle anti-colonialist argument about national liberation or a warning about Russian intentions and EU connivance?  Or is he just spinning a good yarn?

Gainfully employed for thirty years, including as one of those high paid college administrators faculty complain about. Earned Ph.D. late in life and converted to the faculty side. Those damn administrators are ruining everything.
View all posts by Fenster →
This entry was posted in Movies, Television and tagged jo nesbo, occupied. Bookmark the permalink.

4 Responses to Notes on “Occupied”