According to The American Prospect the era of red-blue hyper-partisanship has its origins in the mid-90s.  Around that time American elections became significantly “less variable”.

What happened between 1992 and 1996 to make presidential campaigns more stable? For one thing, Americans started voting more predictably on the basis of national party affiliations and doing so for both the presidency and Congress. Starting from the mid-1990s, the presidential popular vote and the national congressional vote have come into close alignment, differing by an average of only 2.9 percent. Earlier, there was some truth to the dictum that “all politics is local,” as Tip O’Neill, the Democratic speaker of the House from 1977 to 1987, famously put it. But today all politics is national, and it has been that way ever since 1994, when Newt Gingrich and the House Republicans swept into power with a national platform, the Contract with America.

But as the nation hunkered down into two sides an odd thing occurred.  While the shelling of respective positions proceeded elites also found things on which to agree.  This from a column by John Ibbotson in Canada’s Globe and Mail:

But we grew impatient. You have to fight Jim Crow, whatever Peoria thinks. Free trade will lift most boats, even if it swamps a few. The environment is too precious, and at too much risk, to go slow. Lower taxes and less red tape will help the economy grow, even if it profits some more than others.

The left wanted social justice, protection for minorities, a cleaner environment. The right wanted lower taxes and trade deals. Despite the rhetoric, each accommodated the other. Republicans left the Democrats’ progressive policies largely intact; Democrats learned to embrace, or at least reluctantly accept, globalization.

I think Ibbotson is right that we are at an inflection point.  Elites will need to find a new way.  After Trump it may well be the deluge.  They always say Roosevelt saved capitalism from itself.  We need a new figure along those lines, and it is probably not someone who is addicted to 3 AM tweets.  But who knows?  Life is lived forward, under conditions of blinding uncertainty.

The best Fenster can do is to recap a brief children’s book poem that he composed for his defunct blog back in the early aughts.  Apologies to Dr. Seuss’s The Foot Book. 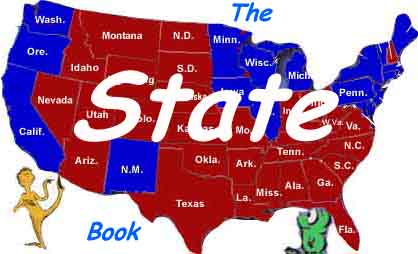 Some states we love
But we hate some too

How many many
States we hate

(The Bay State is
A very gay State!)

But I surely don’t
Exaggerate:
How many many
States we hate.

(visitors welcome to continue, or to try their hand at “One Fish Two Fish Red Fish Blue Fish.)

This is not a happy election for me.  As The Donald has tweeted repeatedly on any number of subjects: Sad!

Is there a silver lining?  Well, deferred gratification is a hall mark of maturity and maybe it is less about what happens in November but rather about the fallout, which will be considerable no matter who wins.  Everyone assumes the worst.  Since past activity is the best predictor of future activity, the election may well presage a simple escalation of existing trends.  Blue and red will clash even more while the quieter consensus of globalization and immigration proceeds apace.  The Dems will double down on PC.  The Republicans will purge the unwashed.  And we will be back on the same glide path we’ve been on since the 1990s.

But is this sustainable?  Or did Trump’s buy-low sell-high instincts uncover something that will not go away so easily?

After the election we could be facing a disastrous escalation, and the past behavior of our elites don’t suggest that they are capable of much wisdom or prudence.  But the new landscape does open up new opportunities for leadership–if only people would see them and take action on them.

Here’s a perfect example: Run Unz theorizing on a new grand bargain for immigration. Past grand bargains were stymied–but of course the reason for the blockage was that the bargains were bogus, and left no room for the marginalized voices that have returned this year with a vengeance.  Unz shows how a grand bargain that would accommodate all voices, not just elite voices, is almost comically easy to envision.  Easy to envision but maybe hard to do.  Let’s see what our elites are capable of.

Gainfully employed for thirty years, including as one of those high paid college administrators faculty complain about. Earned Ph.D. late in life and converted to the faculty side. Those damn administrators are ruining everything.
View all posts by Fenster →
This entry was posted in Personal reflections, Politics and Economics. Bookmark the permalink.