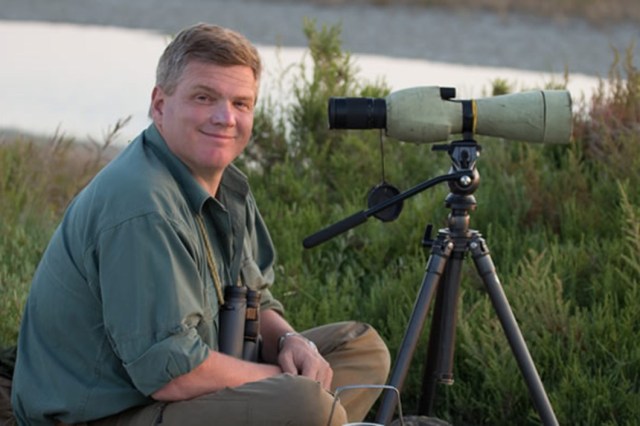 Six short episodes, which my wife and I watched on Netflix. The show’s writer/producer/host, Roy Mears, is smart, articulate and enthusiastic in a goofy-naturalist kind of way, picking up rocks and smelling tree branches and saying “Wonderful, wonderful!” while beaming at the camera. He wears outdoors gear with lots of pockets, and he’s pink and slightly plump in the British overgrown-schoolboy way, almost like Benny Hill or a character out of P.G. Wodehouse. He hauls his scope up mountainsides and out onto the sea, and he visits and talks with local scientists and cowboys and goatherds and such. Being French, they’re slim and short and have terribly attractive accents; they seem slightly puzzled but also amused by the arrival of the big, eccentric, boyish Englishman. (Mears’ own French is very good.) Mears explores caves and meadows and islands, and he stares at eagles, wildflowers and feral pigs while telling us interesting tidbits about them.

The show didn’t appeal to my wife, but I loved it, the main reason being that it was such an unusual way to connect with France. After all, as it’s usually presented in movies and TV, France has to do with cities, farmhouses, history and culture, not nature. And Mears is very good at conveying the special relationship the French have with their countryside.

The other main reason for my enjoyment was considerably more filmbuffy: the simplicity of the show. It’s in fact so plainly made that I often found myself wondering how quickly-shot and low-budgeted it must have been. Or is this just the Roy Mears-documentary style? He’s apparently a popular TV figure in England but I haven’t yet watched any of his other shows.

In any case, the photography is competent but not BBC Earth-stunning, and the cutting is proficient but not crazily jazzed-up. There’s a remarkable absence of slow-mo footage, soaring music and whooshy awesomeness. Cameras are mostly on tripods and the lighting isn’t wait-for-the-perfect-moment exquisite. Some of the episodes barely work out at all — the rare animals we’ve gone in quest of show up only at the very last moment. There’s little in the show that makes you gasp in a “how in the world did they do that???” sort of way.

It’s all so basic that the show almost feels like the kind of thing you could make for yourself over the course of a few weekends. I found this a virtue. For one thing, the series felt casual, sweet and accessible, like a nature walk led by a friendly local guide. For another, I found the show a blessed contrast to today’s usual hyper-manicured, as-slick-as-a-TV-commercial, over-underlined nature doc. Happy to admit that I have no idea if this was intended or pursued in any deliberate, let alone aesthetically-motivated, way. But the effect of the approach for me was that the natural wonders, rhythms and beauties felt like they’d been allowed to be themselves, and to speak for themselves.

A nice passage from an interview with Roy Mears about the show:

The French have this thing called ‘terroir,’ where they celebrate nature in their food. They have a passion for eating and tasting fruits of the land, which encourages them to take care of it. When you’ve eaten local cheese in the Alps, basically you’re eating summer meadows that the goats have eaten, and the French realise that. A Brit will think, ‘Well, it’s cheese.’ … In the UK we don’t have this sense of oneness of food and nature that runs through French veins. But we’re getting better.

Onetime media flunky and movie buff and very glad to have left that mess behind. Formerly Michael Blowhard of the cultureblog 2Blowhards.com. Now a rootless parasite and bon vivant on a quest to find the perfectly-crafted artisanal cocktail.
View all posts by Paleo Retiree →
This entry was posted in Animals, Television and tagged documentary, France, nature, Roy Mears. Bookmark the permalink.