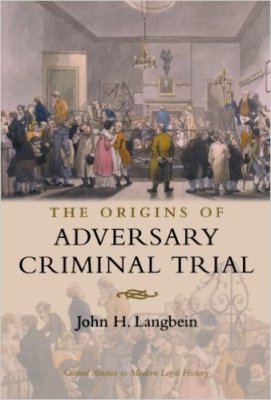 At provincial assize courts in the Elizabethan-Jacobean period (1558-1625) the average duration of a trial, including time for jury deliberations, has been reckoned at between fifteen and twenty minutes. These were cases of felony, which still in Elizabethan times routinely resulted in death sentences upon conviction. …By the mid-eighteenth century the average trial time at assizes may have lengthened slightly, to about a half hour per trial.

The Old Bailey was the London-area equivalent of the provincial assize court. …In the later seventeenth and early eighteenth centuries the Old Bailey, which was the felony trial court for London and the surrounding county of Middlesex, processed between twelve and twenty jury trials per day through a single courtroom. So characteristic was the brevity of trial that when an exceptional criminal trial lasted for some hours, its duration became a subject of remark.

Still in the early nineteenth century [the French observer] Cottu was struck to find ten or twelve trials “may be dispatched in a morning…to a single jury,” whose deliberations typically lasted two or three minutes. The conveyor belt at the Old Bailey ran so monotonously that on one occasion a trial went its course before anybody realized that the court had just tried the wrong man: One John Smith was indicted and tried for stealing nine pounds of raisins. “I am not the person. I know nothing of this matter. I was committed upon suspicion of forgery.” The astonished prosecutor, “looking at the prisoner,” acknowledged that “the man at the bar is not the person.”