Is the Hysteria About Putin and Trump Finally Tapering Off? 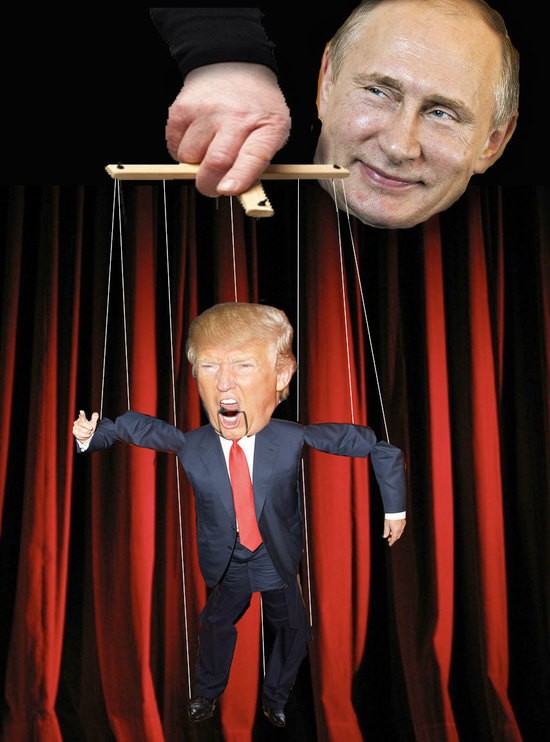 Back in the ’80s and early ’90s, I was one of about six people in the U.S. who were skeptical of what were known as the day-care sex-abuse scandals. Short version: for a number of years, prosecutors and mainstream publications were selling the notion that Satanic ritual abuse was occurring in many of the nation’s day-care facilities. Yup, you read that right. As ludicrous as it may seem today, at the time many of the country’s trusted authority figures were assuring us that young children in a large number of America’s day-care centers were regularly being forced to eat shit, participate in orgies, drink blood and endure being sodomized with crosses.

What was maybe even more amazing was that the great mass of people in the country accepted these tales and allegations. They found them reasonable and believable. Take it from someone who was transfixed and horrifed by the spectacle: protests against these horror-movie scenarios were few and far between. Acceptance of the assertions and allegations was more than widespread, it was essentially unanimous.

Eventually, after numerous expensive trials, investigations and appeals, after lots of accusees spent years in jail, and after mucho heroic work was done by some lone-wolf journalists (the standout, in my view, was Debbie Nathan), the insanity came to an end. None of the abuse had happened. There weren’t hidden caverns and corridors underneath our day-care centers. Animals hadn’t been slaughtered. Child porn hadn’t been produced. The kids whose testimony the whole episode had relied on — the mantra of the day was “Believe the children!” — had been coaxed into inventing fantasies to please bad therapists and ambitious prosecutors. Not a single conviction from those years has held up on appeal or on closer examination. It was all a witch hunt, a moral panic, and a mass hallucination — quite (IMHO) the equal of the legendary Salem witch craziness of the late 1600s.

During the last few months I’ve often been reminded of the day-care sex-abuse episode by the “Trump is Putin’s puppet/together they stole the election” hysteria. Can so many of my bright and lovely lib/Dem friends really believe that — god only knows when and where and how — Vladimir Putin made Donald Trump his bitch, and that together they stole the election from Hillary? On what basis? Relying on what evidence? Doesn’t it mean anything to them that, in the hundreds of articles that have ominously purveyed this fantasy and during the many months the hysteria has lasted, not a single piece of damning concrete evidence has yet turned up?

And when did Russia become the ultimate bad guy in the eyes of lib/Dems anyway? It must have happened very recently, because in 2012 Obama mocked Romney for characterizing Russia as America’s “number one geopolitical foe.” Obama’s response: “The 1980s are now calling to ask for their foreign policy back because … the Cold War’s been over for 20 years.” Dems cheered Obama’s witticism then. What changed since?

I’ve been amazed by how long the hysteria has remained at fever pitch, and I’ve been provoking the ire of lib/Dem friends on Facebook by arguing that the Putin/Trump/election-stealing story seems, to put it mildly, most unlikely. Interesting psychological discovery: people really don’t like being told that they’re acting hysterical, that they’re being used as useful fools by cynical power-driven assholes, and that they might want to calm down and return to reality. Who knew?

But maybe the Putin/Trump/stealing-the-election mania is now finally dying down. I could be wrong, but there have been some encouraging signs.

Greenwald and Taibbi are two of our era’s great investigative journalists while Raimondo is a clear-headed, tough-minded peacenik. By no stretch of anyone’s imagination can they be considered pro-Trump hacks.

So it’s possible that, where an episode of national hysteria goes, I’ve been right once again. Whoopee!  (Incidentally, I don’t often get these things right, so when I do I like to crow a bit about it.) Given that I’ve had precisely zero access to background information and inside dope, how to account for my awesomeness where judging this episode goes? To cut to the chase: it’s been (mostly) common sense.

First, a little boilerplate: It may be that tomorrow will bring convincing proof of collusion between Putin and Trump. Gotta remain open to that possibility. Also, like any other grownup, I take it for granted that the major powers are constantly trying to mess with each others’ internal politics. Does Russia get up to no good? Sure, but so do we … and neither one of those facts means that Putin made Trump his bitch and together they stole the election from Hillary.

So, on to my awesomeness.

(Incidentally, and fwiw: I’ve been quite startled by the response I get from my smart lib/Dem friends when I point these current-journalism-biz facts out. They don’t just frown; they go into despair. “Well, who are we to trust then?” they wail. I had no idea my lib/Dem friends were desperate for a small collection of outlets that can give them the One Big  Truth of things. Have they really had such a hard time adapting to the new, freewheeling, everybody’s-got-an-angle media world? I rather like it myself, and — let’s face it — the old world isn’t coming back any time soon. So how to deal with the new media realities? My tips: take it for granted that every outlet is partisan. Read widely, and from many different sources. Compare notes with pundits and friends who have different viewpoints than your own. Reflect on your own experience of the world, then make up your own damn mind. And be prepared to adjust your picture of the world when better information turns up.)

A tip to my lib/Dem friends: There are plenty of reasons to do battle with Donald Trump, but maybe the “Trump-is-Putin’s puppet and together they stole the election from Hillary” tale isn’t one of the better ones.

Which brings me to something I’m finding myself more and more curious about. As the day-care sexual-abuse hysteria finally died down in the ’90s, I often found myself wondering: The country has lived through a kind of psychotic break. How are people going to deal with it? Will there be any kind of reckoning? How many people will one day sit down and think, “You know, I believed what turns out to have been a completely fake story. What can I learn from this experience?” These days, at least if I’m right and the Putin-Trump hysteria is indeed now calming down, I’m curious about similar questions: How are the lib/Dems (my friends, the politicians, the media) going to deal with the evaporation of a narrative they’ve been hysterically attached to for a number of months? Will they ever admit they were wrong? Will they allow themselves to learn from their mistake? Or will they excuse their naiveté and wrongheadedness because, in the battle against Hitler/Trump, everything’s allowed and forgivable?

Onetime media flunky and movie buff and very glad to have left that mess behind. Formerly Michael Blowhard of the cultureblog 2Blowhards.com. Now a rootless parasite and bon vivant on a quest to find the perfectly-crafted artisanal cocktail.
View all posts by Paleo Retiree →
This entry was posted in Politics and Economics and tagged Donald Trump, journalism, Vladimir Putin. Bookmark the permalink.

16 Responses to Is the Hysteria About Putin and Trump Finally Tapering Off?