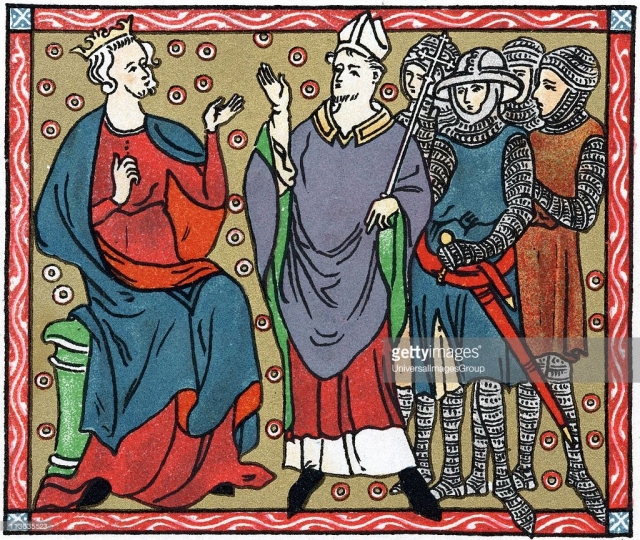 In June 1170, Roger de Pont L’Évêque, the archbishop of York, along with Gilbert Foliot, the Bishop of London, and Josceline de Bohon, the Bishop of Salisbury, crowned the heir apparent, Henry the Young King, at York. This was a breach of Canterbury’s privilege of coronation, and in November 1170 Becket excommunicated all three. While the three clergymen fled to the king in Normandy, Becket continued to excommunicate his opponents in the church, the news of which also reached Henry II, Henry the Young King’s father.

Upon hearing reports of Becket’s actions, Henry is said to have uttered words that were interpreted by his men as wishing Becket killed. The king’s exact words are in doubt and several versions have been reported. The most commonly quoted, as handed down by oral tradition, is “Will no one rid me of this turbulent priest?”, but according to historian Simon Schama this is incorrect: he accepts the account of the contemporary biographer Edward Grim, writing in Latin, who gives us “What miserable drones and traitors have I nourished and brought up in my household, who let their lord be treated with such shameful contempt by a low-born cleric?” Many variations have found their way into popular culture.

Whatever Henry said, it was interpreted as a royal command, and four knights, Reginald FitzUrse, Hugh de Morville, William de Tracy and Richard le Breton, set out to confront the Archbishop of Canterbury.

President Trump asked the F.B.I. director, James B. Comey, to shut down the federal investigation into Mr. Trump’s former national security adviser, Michael T. Flynn, in an Oval Office meeting in February, according to a memo Mr. Comey wrote shortly after the meeting.

“I hope you can let this go,” the president told Mr. Comey, according to the memo.

The documentation of Mr. Trump’s request is the clearest evidence that the president has tried to directly influence the Justice Department and F.B.I. investigation into links between Mr. Trump’s associates and Russia. Late Tuesday, Representative Jason Chaffetz, the Republican chairman of the House Oversight Committee, demanded that the F.B.I. turn over all “memoranda, notes, summaries and recordings” of discussions between Mr. Trump and Mr. Comey.

Such documents, Mr. Chaffetz wrote, would “raise questions as to whether the president attempted to influence or impede” the F.B.I.

1 Response to Juxtaposin’: The King Threatens?