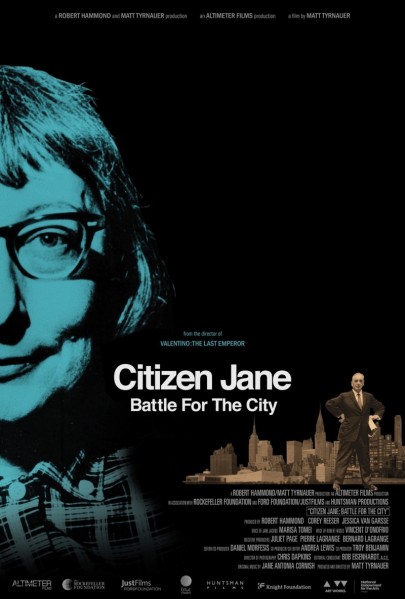 As the full title implies, director Matt Tyrnauer‘s documentary profile of writer and urban theorist Jane Jacobs frames her story in terms of confrontation. In this corner we have politician Robert Moses, the power broker of post-World War II New York City who believed that master planning and audacious engineering could solve the city’s problems. Moses’s projects — including the 1938 and 1964 World’s Fairs, the Cross Bronx Expressway, Jones Beach, Lincoln Center, and Verrazano Bridge — have left an indelible mark on the city. In the other corner, in contrast to Moses’s top-down, colossus-bestriding-the-city modernism, we have the proletarian humanism of Jane Jacobs. Jacobs pulled city planning down to earth by taking a bottom-up, human-centered approach that emphasized the spontaneous order of how every day people interact with and shape the built environment. Not one to shy away from a fight, she famously opened her 1961 masterwork, The Death and Life of Great American Cities, with a shot across the bow at Moses and his ilk: “This book is an attack on current city planning and rebuilding.” The Jacobs v. Moses fight is a great David v. Goliath story but, in bowing to current political trends, Tyrnauer diminishes Jacobs and her ideas.

Tyrnauer’s film sees Jacobs through the lens of political activism. At various times, the documentary touts her as a woman making her way in a man’s world, a champion of diversity, and a feminist/progressive pioneer in line with other contemporaries like Betty Friedan and Rachel Carson. The spine of the movie is Jacobs’s successful protest of two Moses projects: Washington Square Highway, which would’ve connected Fifth Avenue to West Broadway, thereby destroying Washington Square Park by cutting it in half and the Lower Manhattan Expressway, a highway that would’ve connected the Holland Tunnel to the Williamsburg Bridge by plowing through SoHo and Little Italy. Jacobs participated in two grassroots community campaigns that successfully stopped both projects and, sure, those are accomplishments that anyone can be proud of. But protest isn’t what made Jacobs Jacobs. She wasn’t motivated by feminism, a love of racial diversity, or social justice. She was motivated by her urbanist ideas that she wrote about in a 600-page book.

Although some of Jacobs’s ideas are addressed, the movie does so in a predictably perfunctory way. Take the illustration of her famous “eyes on the street” insight. The movie simply asserts that a traditional, mixed-use Manhattan street is safer than a similar space in a public housing high-rise courtyard because more people are present to watch out for one another. But what elements make the traditional Manhattan street more likely to attract people than the high-rise courtyard? After all, don’t plenty of people live in high-rise projects and don’t they have eyes too? Why are people more likely to linger in one area and not another? What precise characteristics distinguish the Jacobs city from the Moses city? Watching this movie, you’d never know that Jacobs spends almost 100 pages of her book talking about sidewalks. (Tyrnauer’s lack of interest in any substantive ideas extends to his talking heads. Paul Goldberger, James Howard Kuntsler, Mike Davis and others appear on screen and all of them end up sounding the same, which is odd, because I’m guessing that Goldberger, Kuntsler, and Davis don’t agree about much.)

In case you think that I’m exaggerating Tyrnauer’s POV, he stated it explicitly:

Jacobs was fearless in speaking truth to power, the model of a citizen soldier. Her story resonates today, as we are faced with a president—an international developer, no less, of luxury towers—who throws around the terms ‘urban renewal’ and ‘American carnage.’ The film can be seen as a playbook for people who want to defend vulnerable minority communities everywhere…

Jacobs was committed to defending diversity, but she had nothing to say about the racial kind. Part Two of Death and Life concerns the “conditions for city diversity” and Jacobs spends over 100 pages spread across six chapters talking about the need for mixed primary uses, the need for small blocks, the need for aged buildings, and the need for a concentration of people. Also, Tyrnauer praising “speaking truth to power” bit is funny when you consider that his film was financed by a grant from the Rockefeller Foundation. After two failures due to Jacobs’s protests, a politically weakened Moses was finally fired by a brave politician. That heroic white knight? Nelson Rockefeller. The documentary respectfully omits that Nelson’s brother David was the guiding force behind the Moses-like World Trade Center project that destroyed a thriving neighborhood of mom-and-pop businesses. When she wrote Death and Life the Rockefeller-backed WTC plan was only a proposal, but Jacobs spent a few pages in Chapter 8 of her book attacking it:

The business and financial interests represented in lower Manhattan have for several years, in cooperation with the city, been working hard at preparing plans and starting work to regenerate this area. They have proceeded according to orthodox planning beliefs and principals. …

Lower Manhattan is in really serious trouble, and the routine reasoning and remedies of orthodox planning merely compound the trouble. What could be done to ameliorate effectively the district’s extreme time imbalance of users, which is the root of its trouble?

…And finally, this new use (or uses) ought to be in accord with the district’s character, certainly not at cross-purposes to it. It is the character of lower Manhattan to be intensive, to be exciting, to be dramatic, and this is one of its greatest assets. What is more dramatic, even romantic, than the tumbled towers of lower Manhattan, rising suddenly to the clouds like a magic castle girded by water. Its very touch of jumbled jaggedness, its towering-sided canyons, are its magnificence. What vandalism it would represent (what vandalism the present project plans represent!) to dilute this magnificent city presence with the humdrum and the regimented.

Far more significant is that Death and Life itself was the product of a Rockefeller Foundation grant. Was Jacobs, who got her career started writing propaganda for the Office of War Information, controlled opposition? And how important were her connections when it came to facing off against Moses?

Whatever the case may be, the movie got me thinking about Jacobs’s legacy. Although Death and Life is revered in architecture and urbanist circles, how much actual impact has it had on our built environment? She certainly influenced the New Urbanist movement, but they’ve had a very limited (and very controversial) effect. Although her object was to take down the architectural orthodoxy, she may have defeated Moses the man but Moses-like thinking still abounds in architecture and city planning. The starchitect — the bold visionary who will transform how the plebs live, if only they’ll conform to his/her vision — is the reigning conception of how we understand architects. If you don’t believe me, just watch the Bjarke Ingels episode of the Netflix series “Abstract,” where every line of fortune cookie gibberish that comes out of Ingels’s mouth is treated like a profound insight.

Jacobs, who died in 2006, was herself incorrect about her legacy. After Death and Life she wrote six more books which mainly focused on economics. “If I were to be remembered as a really important thinker of the century, the most important thing I’ve contributed is my discussion of what makes economic expansion happen. This is something that has puzzled people always. I think I’ve figured out what it is,” she said. Her economic ideas have been discredited across the orthodox spectrum which, depending on your perspective, may or may not be a point in her favor.