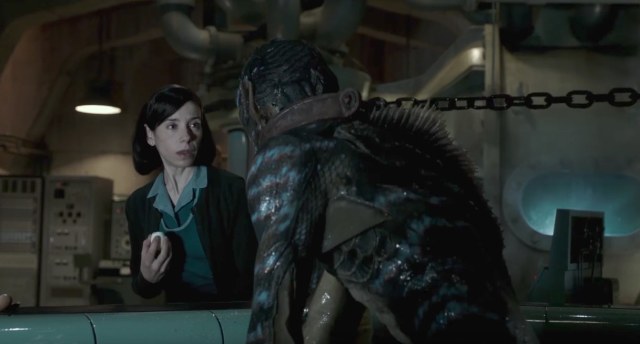 In this interview with Matt Zoller Seitz, writer-director Guillermo del Toro says, “Every film is a political film.” After the rock-’em-sock-’em robots of PACIFIC RIM and the Gothic reverie of CRIMSON PEAK, del Toro (along with co-writer Vanessa Taylor) returns to the territory of the political fairy tale in THE SHAPE OF WATER. Del Toro has mined this vein before in his most critically lauded film, PAN’S LABYRINTH, only this time he approaches it in terms of romance. (Warning: SPOILERS follow.) Set in 1962 Baltimore, the story concerns a mute, middle-aged cleaning woman (Sally Hawkins) who works at a secret government facility. She has two best friends — a sassy fellow cleaning woman (Octavia Spencer) and a closeted gay neighbor (Richard Jenkins). One day, a mysterious, amphibious creature referred to as “The Asset” (del Toro regular Doug Jones) is brought to the facility by a menacing military operative (Michael Shannon) where it will be studied by a government scientist (Michael Stuhlbarg) hoping to learn something about its anatomy in an effort to give American astronauts an edge against the Russians in the Space Race. Our heroine, sensing a marginalized soul such as herself, immediately falls in love with the creature. The inevitable complications ensue.

Del Toro says the inspiration for the movie stems from watching THE CREATURE FROM THE BLACK LAGOON as a child and his disappointment that the creature and woman never consummated their love. He wanted to rectify that. Although our heroine’s encounter with the fishy beefcake takes place off screen, as a Mexican ex-Catholic, del Toro is not squeamish about gore or nudity. I was a little surprised that this mainstream movie contains a few nice moments of gratuitous nudity, the first coming within a couple minutes of the opening credits. (Great ass, Sally!) But when it comes to handling actual romance, del Toro stumbles badly. The movie lumbers from one predictable plot point to another without much charm or energy. The production design, costumes, and photography provide plenty of eye-pleasing details (as Fabrizio said here, del Toro is a great miniaturist, as well as discerning collector of exotics), but del Toro’s attempts to add whimsy and lightness are constantly undermined by his efforts to invest the material with sociological importance.

This problem is inherent in the film’s basic conception: how can you achieve a fairy tale atmosphere when you’re constantly reminding the audience of everyday political realities? Del Toro isn’t content to just address loving the Other (the theme of a zillion other stories), he must include banal broadsides against white racism, homophobia, immigration, Cold War politics, and American consumerism. In one of 2017’s most incredible scenes, the closeted gay man played by Jenkins finally works up the courage to make a pass at the owner of a local diner. The owner recoils in disgust. As he’s doing so, a black couple enters the diner and asks to sit at the counter. The owner refuses. The strong black woman defiantly observes that the counter is currently empty. The owner asks them to leave, turns to the Jenkins character, says “This is a family restaurant,” and orders him to leave too. The only thing missing from this scene is the owner loudly shouting, “I’m heading to Charlottesville!” before putting on a MAGA hat and marching out to burn a cross. Has anyone ever watched Cocteau’s BEAUTY AND THE BEAST and said to himself, “Y’know, this is pretty wonderful, but what it really needs is a critique of medieval serfdom”? Has del Toro ever seen SULLIVAN’S TRAVELS?

On the other hand, it’s entirely possible del Toro will have the last laugh because didactic parables seem to be the order of the day. From genre fare like MAD MAX: FURY ROAD to Oscar bait like MOONLIGHT and HIDDEN FIGURES to auteurist products like JACKIE and SILENCE, Hollywood specializes in stories where progressive heroes suffer at the hands of reaction. This was brought home to me in the post-movie Q&A. I was lucky enough to attend a preview screening hosted by the Eastern divisions of the Producers Guild and Writers Guild at which del Toro himself was present along with the entire main cast sans Hawkins. Del Toro started the chat by saying there was too much cynicism in the world, he believed in love, and that “as storytellers, we have to be willing to go to unpopular places.” (Saying you believe in love is unpopular? Since when?) When a trans-woman raised her hand to say that the heroine’s desire for love and acceptance was all she ever wanted too, del Toro got choked up and Michael Shannon gave him a comforting squeeze on the shoulder. The last comment from the audience was provided by a black woman who wanted to praise Spencer’s performance. Although Spencer played a black cleaning woman, hers and Hawkins’s performances were so rich that the relationship “transcended race.” Spencer thanked the woman for her comment and added that, as a black woman, she was very aware she was playing a character “without any agency.” Spencer added that it was “important” to note that the two lovers in the movie are literally voiceless yet their figurative voices were provided by a black woman and gay man.

I should note that I don’t for a second doubt the sincerity of del Toro, the actors, or anyone else in attendance that was moved by the movie and testimonials. But it was still an odd glimpse into a mental life that is foreign to me. For some people, it’s still 1962 in Baltimore and they really need to hear the most trite of cliches. The next time I hear some nerd scoff at the silliness of a Katherine Heigl rom com or Lifetime weepie, it’s going to be hard for me to refrain from pointing out that those works are no dumber than the ideas, such as they are, contained in this movie.