Note to M—, on Brooksie

You and I have an ongoing dialogue going over David “Brooksie” Brooks.  I was once a fan, especially on his culture stuff.  Even second-rate Tom Wolfe can be excellent, and Brooks often was.  And he can still hit it out of the park every now and again.  But his Times sinecure has brought out the worst in him.   His cultural commentary was often generous in spirit but his newfound power brings out the scolding side.  And his New York City biases show, despite his professed effort to see America whole.

His latest column is Brooksie at his blinkered, New York-centric worst.  In it, he argues that his trademark earnest approach to guns–show some respect and everyone will get along!–may have been in error and that progressives may be on to something in applying their hyper-aggressive culture war tactics to the gun battle.

As always he is observant and notes some things that are inarguable.  For instance: a culture was is a kind of war and it is fought across different kinds of terrain and with different weapons.  Check.

But what he comes close to saying–no, what he actually, really says–is that the kind of scorched earth practices we have seen on campuses, and are increasingly seeing in HR departments and in the banning of YouTube videos, might profitably be employed in the battle over guns.  And that that will be a good thing since it will help seal progressive victories across the board.

Mind you, this is from one of the Times’ alleged conservatives.  Go progressives!

Brooks cites Andrew Sullivan’s observation that leftish thought control has  begun to migrate from the academy to the broader culture.  But Sullivan, another writer who can swing both ways politically, does not like the trend.  Brooksie thinks is is just capital!

Sure, he puts in one sentence so as to maintain some credibility:  dear progressives don’t be too fascistic about your tactics– it’s not sporting, and I have a reputation to protect as an echt-reasonable, intellectually serious spinmeister.  But the gist of the article is unmistakable: pathologizing the opposition on guns could be an effective strategy so why not?

So let’s be clearer about what is going on.

Brooks’s side has an inordinate amount of ordnance it can and does use in the culture wars.  His side has the commanding heights of the media, academia and conventional politics.  And we see that ordnance in use all the time.  We see social media companies happily censoring voices they do not like on the web. We see a magical “children’s crusade” after the Parkland school shooting essentially scripted, organized and funded by their progressive elders. We see companies penalizing employees who don’t fall into line on right thought and behavior.

OK.  I get that.  Politics ain’t beanbag, as the saying goes.

Let’s be honest, however, about what it is: strong arm tactics on the part of those with the whip hand.

But two can play this game, and if there is war on I expect opposition.  And given the different circumstances of the two sides, the opposition is likely to mount guerilla attacks rather than form a line.

Brooks seems to downplay or underestimate that pushback.  He’s like that Saul Steinberg New Yorker cover–if it doesn’t happen on this side of the Hudson it doesn’t really count. 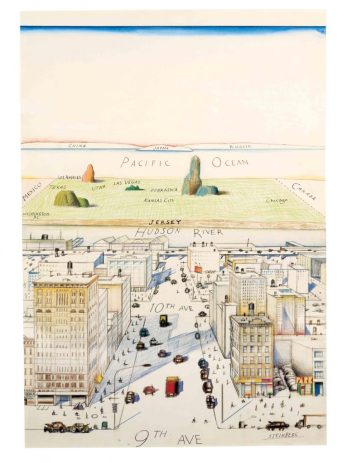 And so he writes “conservatives have zero cultural power, but they have immense political power.”  Really?  What . . . .ummm . . .  does he make of Trump’s election, the very distillation of a latent cultural power that was completely overlooked east of the Hudson?

OK, he might acknowledge, Trump won and maybe the coastal people missed that.  But in the interim Trump conservatism has “self-marginalized”.   It has become a “a separatist subculture that participates in its own ostracism.”  All progressives have to do now is deliver that one big punch, one that will “cut what’s left of the conservative movement off from mainstream society.”

It’s all very apocalyptic, martial and triumphalist.  But is it remotely true?  With Trump’s approval ratings at 50%, higher than Obama’s at this time in his presidency?  And this, when he has the entire array of the establishment, including the so-called mainstream media, against him?

When the Dems have dug a hole on the tax cut and immigration, and keep on digging?

When Trump has shown himself to be an able general in the culture war what with the pounding he delivered to the NFL?

When Wall Street financiers fret about tariffs but gruff heads of manufacturing firms emerge from the White House to laud the president (if you can catch the momentary video of this on the nightly news)?

When Trump himself has moved to a moderate position on gun legislation?

On domestic policy at least Trump is getting more Bannonite in Bannon’s absence than he was when Bannon was present.

Both sides are moving to capture the so-called mainstream and it is still a jump ball.

To say Trump has self-marginalized a movement that is now surrounded on all sides is to evidence a truly Steinbergian boneheadedness.

That is not to say it is the other way around, and that Trump has Manhattanites on the run.  It is, as Brooks notes, a war.  It is just not a war that is anywhere near over.

Gainfully employed for thirty years, including as one of those high paid college administrators faculty complain about. Earned Ph.D. late in life and converted to the faculty side. Those damn administrators are ruining everything.
View all posts by Fenster →
This entry was posted in Politics and Economics, Uncategorized and tagged David Brooks, gun control, gun rights. Bookmark the permalink.

4 Responses to Note to M—, on Brooksie