The Emperor Has White Paint

A few months ago, when I was at the Whitney museum, I was confronted by this masterpiece: 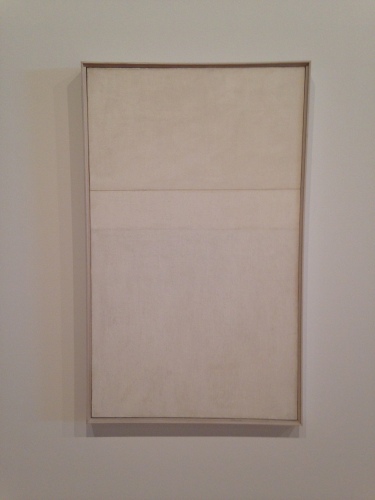 But maybe there’s something really deep going on in this work that I just don’t understand. Do you find this explanation persuasive?

I love how the vid tries to tie rejection of this modernist work into toxic masculinity. If you don’t like white paintings, you must be a low-information, angry man!

This video was brought to my attention by Jason Kottke, who passes along further justification from a critic:

Always, Ryman invites contemplation of the light that falls on his paintings (which when I saw them, on a recent cloudy day, was glumly tender as it filtered through the Dia skylights) and of their formal relation to the rooms that contain them. There’s no savoring of style, just stark presentation. His work’s economy and quietness may be pleasing, but its chief attraction is philosophical. What is a painting? Are there values inherent in the medium’s fundamental givens — paint skin, support surface, wall — when they are denied traditional decorative and illustrative functions? Such questions absorb Ryman. Do they excite you? Your answer might betray how old you are.

Still not convinced? Here’s the artist himself:

White has a tendency to make things visible. With white, you can see more of a nuance; you can see more. I’ve said before that, if you spill coffee on a white shirt, you can see the coffee very clearly. If you spill it on a dark shirt, you don’t see it as well. So, it wasn’t a matter of white, the color. I was not really interested in that. I started to cover up colors with white in the 1950s. It has only been recently, in 2004, that I did a series of white paintings in which I was actually painting the color white. Before that, I’d never really thought of white as being a color, in that sense.

I found these comments, overheard in another forum, more persuasive:

The same set of justifications is applied to non-white modernist paintings. Yeah, I get it, if you look closely, there are brushstrokes and variations in tonality. That’s not going to make anyone like them more. 98% of people look to art for pleasure, beauty, and subject matter that they can relate to their experiences. You aren’t going to convince these people that white paintings are great by reminding them that they include different sorts of white.

Someone makes a subtle dig at you. If you let it go by they express their power in that moment. If you object they say you are being touchy, and express their power that way. I can’t help but see things like minimalism as that kind of subtle power play. You reject skill, meaning, representation, audience but in a way that you can’t be caught out. You are an austere and elusive preacher. But preaching what? Note how little of this piece can put words to what it is, exactly, that you learn or experience in viewing the art, and how much ink is spilled on the rejection of gesture and the outrage of the unwashed. That’s a tell.

But then again this stuff is a Rorschach and no doubt I am just projecting my insecurities.

Amateur, dilettante, wannabe.
View all posts by Blowhard, Esq. →
This entry was posted in Art and tagged modernism, postmodernism, the emperor has no clothes, The Whitney. Bookmark the permalink.

7 Responses to The Emperor Has White Paint