While trying to remember the last words to that song I had this unrelated memory.

Way back in the 1990’s, back before our current sophisticated understandings of intersectionality and other advanced concepts, the Diversity Dynamo was just warming up.  It was a more innocent time, though a time still redolent of ideas like multiculturalism and privilege, albeit in crude and truncated form.

Back then I stumbled on an article in a prestige journal highlighting how one campus was dealing with all of these newly emergent issues.  I wish I could lay my hands on it but I cannot so this synopsis will have to do.

The article concerned an elite campus–the kind of campus that paid attention then, as it would now, to these kinds of issues.  One notable feature of the article is that it was permitted to both appreciate the current state of the art on matters relating to diversity but at the same time express some skepticism.

You’d think skepticism would have naturally been allowed to grow as these issues have ripened to the point of their current rot in the present day.  But that is of course not how it works.  It works the other way round.  The increased lunacy was accompanied not by heightened skepticism but the opposite.  No one is now allowed to question hardened dogma.  It is enough to make one pine for the days of 1991’s water buffalo incident. Back then one might appreciate the rationale for diversity and still be permitted to roll one’s eyes and chuckle at its excesses in practice.  No such humor is allowed today, comrade.

The article in question was positive enough about diversity but closed with a chat with a couple of students who approached the matter from a different angle.  Yes, they opined, it is important to understand difference.  But do we need all the browbeating seminars?   Perhaps, they theorized, things are simpler than all that.  Perhaps the way to go about it is to start with a friendly “hello” to someone who may have a different cultural or racial background.  Then proceed with an open and respectful conversation.

Ah, but that was, as I say, a more innocent time.  We know now that those two kids at that elite college had yet to unpack their white privilege.  Things. Are. Not. That. Simple.

So events have proceeded, step by dreary step.  The progressive Left walks further and further down the plank, doubling down over and over, unable to find a way to reverse course.

In the current day the Left, once naive but joyous, consists of a bunch of sourpusses.  Shelby Steele uses his characteristic insight to probe the why of it:

How did the American left—conceived to bring more compassion and justice to the world—become so given to hate? It began in the 1960s, when America finally accepted that slavery and segregation were profound moral failings. That acceptance changed America forever. It imposed a new moral imperative: America would have to show itself redeemed of these immoralities in order to stand as a legitimate democracy.

The genius of the left in the ’60s was simply to perceive the new moral imperative, and then to identify itself with it. Thus the labor of redeeming the nation from its immoral past would fall on the left. This is how the left put itself in charge of America’s moral legitimacy. The left, not the right—not conservatism—would set the terms of this legitimacy and deliver America from shame to decency. . . .

This amounted to a formula for power: The greater the menace to the nation’s moral legitimacy, the more power redounded to the left. And the ’60s handed the left a laundry list of menaces to be defeated. If racism was necessarily at the top of the list, it was quickly followed by a litany of bigotries ending in “ism” and “phobia.”

The left had important achievements. It did rescue America from an unsustainable moral illegitimacy. It also established the great menace of racism as America’s most intolerable disgrace. But the left’s success has plunged it into its greatest crisis since the ’60s. The Achilles’ heel of the left has been its dependence on menace for power.

This was very much on display at the Kavanaugh hearings. The old Democrats like Feinstein were bad enough but they are ossified.  One would hope the next generation might think a little differently.  But, honestly, it was very hard for me to watch Kamala Harris and Cory Booker without getting very bad feelings about it: dread over Harris’s skilled identity politics opportunism and incredulity at Booker’s clownish identity politics antics.

And, honestly, I find it hard to believe that my many progressive friends do not see that things have gone to rot in both intellectual and political realms.

Some may have an inkling of the bad moon rising, in which case my response is: try harder.  Try to be honest about dealing with what you see.  Be willing to reconsider hardened orthodoxies.  I am happy to have an honest conversation about it– a real one, not a struggle session. 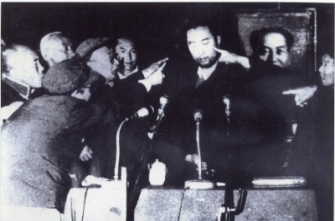 Others may sincerely think the Progressive Left, with all its advanced beliefs, still holds the moral high ground and is entitled to use its whip hand as it sees fit.  To them I respond with the bastardized version of that last words to that song:  F*ck you.