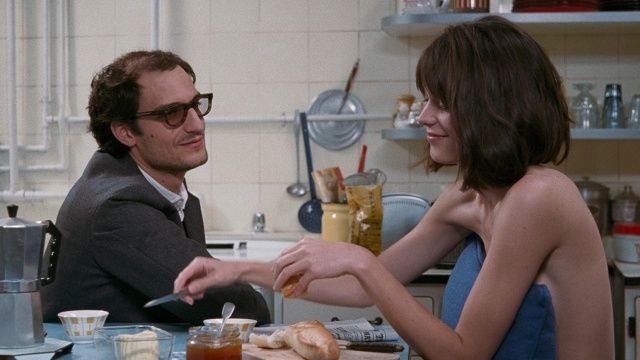 “Redoubtable” is a demystification of Jean-Luc Godard and a dramatization of his turn to radical politics. Director Michel Hazanavicius lacks the ferocity and lightning wit of the artist he’s spoofing, but his somewhat plodding covers of Godard’s greatest hits are better than those of directors who try to “do Godard” by taking him straight. By goofing on Godard he at least does justice to his playful spirit. It helps that Hazanavicius’ preferred mode of stringing together semi-satirical set-pieces isn’t far removed from Godard’s; both men are drawn to pastiche. The movie asks: If cinema is your metaphor for life, what happens when you stop believing in cinema? When asked by the Godard of “Redoubtable,” this question spurs a breakdown. Hazanavicius doesn’t externalize Godard’s crisis; it’s understood by him alone. There’s a suggestion that it’s the result of an inherent idiosyncrasy: that Godard’s stubborn adherence to his peculiar manner of seeing, so evident in his ’60s films, is at the root of his downfall. Stacy Martin looks more like Chantal Goya than Anne Wiazemsky, and she doesn’t get a big moment, but she’s lithe and courageous and seems to understand what Hazanavicius needs (and what Godard needed) in the way of iconography. Her Anne has her own question: When you love a man because he’s a pop idol, what happens when he denounces himself? Can one idolize a fallen idol? “Redoubtable” turns on these questions and on the way in which Hazanavicius equates movies and creativity with concepts like the ego, love, and individuality. Like Godard, he’s in love with metaphors. For every clunky moment, such as the one in which Godard and Anne discuss nude scenes in the nude, there’s an insight that sneaks up on you, and encourages you to see Godard less as a towering intellectual than as an artist bumping up against the limits of his inspiration. I suspect this humanization is what caused movie eunuchs to come out so strongly against the movie. They prefer the Godard to whom they can’t relate. Hazanavicius brings him too close to eye level. There’s no doubt that “Redoubtable” presents a middlebrow Godard. But in the words of a friend of mine, “So what?” The best filmmaking in the movie occurs in the scenes of protest in the Paris streets. These passages have an authenticity, scale, and energy that are rarely seen in modern movies. We’re now at the point in movie history where a good crowd scene seems almost magical.