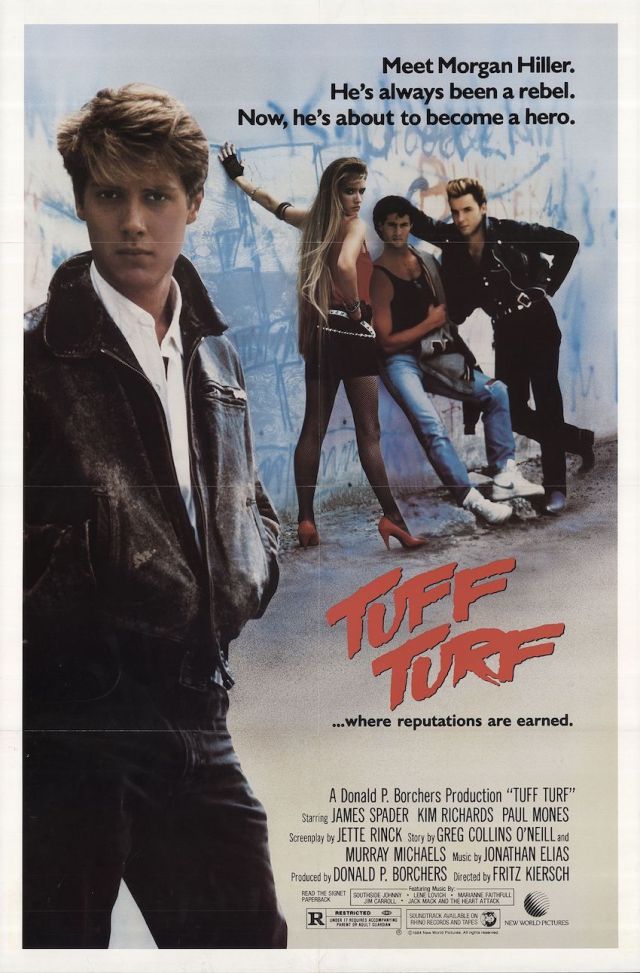 The 1985 “Tuff Turf” is an intriguing cult item and a key entry in the James Spader canon. Spader’s Morgan moves to L.A. from Connecticut. His Angeleno friends speak of Connecticut the way a fur trader of the Upper Missouri might speak of Boston; when they say the name of the state, they pronounce the second C. Screenwriter Jette Rinck hasn’t decided what Morgan represents, so he (or is it she?) has him represent everything. He’s a vigilante, a privileged white kid, a busted down-and-outer, a ladies’ man, gay. Spader shoulders each of these personalities with equal enthusiasm; he’s some kind of chameleon. “Tuff Turf” isn’t as knowing as a Jack Hill movie, but it often moves like one; it has Hill’s energy and his dive-bomber approach to genre. The main narrative thrust is Morgan’s bullying at the hands of a crew of ethnic-looking high schoolers. (The idea is that L.A. is some kind of barely civilized backwater, filled with vaguely Mexican characters possessed of rough manners and rougher haircuts.) They’re bigger than Morgan, and more masculine, and there’s real subversiveness and kink in the way their jockeying for status trips into mutual torment. A scene in which Spader is whipped in a white-tiled bathroom is almost pornographic in emphasis. Spader is a real object here. He has Anne Wiazemsky’s face and George Michael’s hair. For the first two-thirds, director Fritz Kiersch maintains a high level of energy. When he doesn’t know what to do, he throws in a musical sequence. At one point he even has Spader sit down at a piano and lip-sync to a crooned ballad. In the final third Kiersch attempts to transition to a minor key, and the movie loses something. The editing is consistently idiosyncratic, wobbling between cut-rate New Wave lyricism and Eisensteinian percussiveness. I love the party scene. Former Disney star Kim Richards seems to be having a lot of fun dressing up as a bad girl and doing what she can to draw Morgan’s interest away from doe-eyed Robert Downey, Jr.