I was going to write about the Super Bowl halftime show but boy has that ever been done to death in a few short days.  Plus it is treacherous terrain no matter what side of the aisle you situate yourself on politically.   You can find libertines and libertarians on both right and left, and the corresponding emergent prudishness on fulsome display in our culture has also found support from all sides, uniting lefty feminists with alt-right Gamer apostates.  In turn comments sections and tweet clusters where you might expect doctrinal unanimity also have evidenced a pronounced cleavage where opinion is concerned.

So for now I will . . . . pass.  Feel free to comment on the halftime show.  And I may get around to posting on it once the dust settles a bit.

For now I am more interested in the ads.  And so I am working on a series of posts on the 2020 Super Bowl commercials.  This post kicks it off with an overview.  Later posts will go a bit deeper into common themes as well as the architecture of specific ads.

Super Bowl ads, like the halftime shows, get a lot of their own press.  Most coverage relates to issues like creativity, humor, production values and effectiveness.  Their utility as vehicles for social messaging is also covered quite a bit, though not as closely as their buzzability aspects.  UR readers will not be surprised that I will focus mostly on the social messaging side.

While the Super Bowl has always done quite well for itself relative to viewership, the demographics of who watches has been changing, with consequences for the ads.  While 2020 saw a bump up from 2019 viewership has slipped quite a bit over the past decade, with more of the falloff among whites.  Some of that is attributed to the racial themes unearthed in the Kaepernick-Trump tussle, though that might not be the only factor at work.

Still and all whites comprise the bulk of the audience.  In fact from what I have been able to glean here and there on the web whites are a tad over-represented, with white viewership slightly higher as a percentage of viewers than whites as a percent of the population.  Black viewership is about in line with its percentage of the population, with Hispanics slightly lower and Asians not a real factor.  See here for a relatively recent general discussion and for this interesting chart on Asian (dis)interest.

This out of a total viewership around 100 million

Starting a couple of years ago we began to see more coverage about the growing number of women viewers.  The total number of female viewers is now about the same as male viewers.  Moreover,  females are close watchers. According to TVision

(o)nce the ball was snapped, women were over 27% more likely than men to be paying attention.

So given the increasing number of female viewers, the attention paid to the ads and the role of women as the main purchasers in domestic settings it would only make sense for the ads to be somewhat different from the way they were in 1995

Despite these changes in viewership, some commentators claimed that they could still see too much of a male tilt as recently as a couple of years ago–i.e., the ads were not keeping up with the new demographics.  After the 2018 game an article in AdAge concluded “Super Bowl So Male.”

So much for advertisers getting woke. Once again the Super Bowl is poised to be filled with commercials starring and appealing to a predominantly male audience.

In any other year this wouldn’t come as a surprise; historically Super Bowl ads haven’t been especially kind women (sic?). But even amid the #MeToo and #TimesUp movements, with women (and men) speaking out for gender equality, marketers don’t seem to be making much of an effort to even appear inclusive.

As of Thursday morning, there were more than two times as many male celebrities than female appearing in Super Bowl commercials (20 men compared with just eight women).

By the time of this claim brazen male-themed ads were already on the way out, or gone.  No more Carl’s Jr. ads. 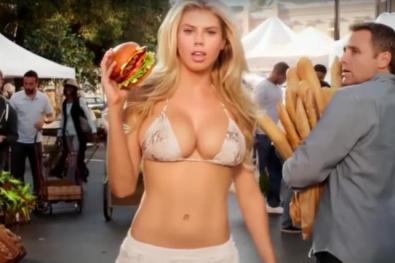 But the claim was made that a simpler form of bias still existed by way of the preponderance of male to female celebrities.

I have not gone back to audit the 2018 commercials that are the subject of the article but see no reason to doubt the counting.  Yet the critique is about counting: twice as many men as women!  A simple tally of male and female celebrities seems to be a pretty crude way of looking for social justice in the age of woke.  It doesn’t go far enough.

Indeed, an article in Medium at roughly the same moment agreed with the AdAge critique and then presented a fairly modest set of prescriptions for “equality”.

Thankfully one solution is actually quite simple, it will just require some creative, out of the box thinking. There is nothing — other than a lack of creativity — stopping marketers from replacing some male characters with female characters. No need to portray the genders in different ways, just use an equal gender distribution of characters. If a movement is made to reach equality in Super Bowl advertisements — or really all advertisements — advertisers may be more likely to equally represent men and women in advertisements. And that is much better than than decreasing stereotypes by removing women all together from ads.

The change really isn’t that big, but it could yield a much healthier society in the future. So, as consumers of media, our challenge is to hold advertisers to a high standard of equality, not just an avoidance of stereotypes.

That’s very modest as a prescription.  Just stop showing more men than women.  Make them about the same in terms of representation and all will be well. “No need to portray the genders in different ways.” No need to show males less than females, or whites less than minorities, or to change the way gender or ethnic roles are represented,  No need to replace old (bad) stereotypes with new (good) ones.

It is an odd, 1950s-style, “content of character” argument to make in the midst of the Great Awokening.  Recall these arguments were mounted a mere two years ago, following the 2018 game.  Steve Sailer and others have shown the Great Awokening to have kicked off five years years earlier, around 2013.

At that point American culture was presented with a new set of mandatory rules on gender, race and other culturally fraught issues.  These rules didn’t even seem to emerge slowly and grow organically,  They just suddenly happened everywhere and all at once, like Topsy. It says something about the inertial power of a big institution like the Super Bowl that it was not fully woke by 2018, and that prescriptions for change were rather modest.

But the forces of change appear to have been inexorable.  Given the forces of woke and  #metoo change in Super Bowl ads appeared to come, like Hemingway said of bankruptcy, gradually then suddenly.  The 2020 ads look to me to be fully awakened.  The “suddenly” seemed to occur in just the past two years.

I watched the game and saw nearly all the ads at that time.  Commercials, along with ratings, commentary and other discussion, are also available online. Here is AdAge’s recap of all the ads shown in real time, with links to the ads and commentary.

The real time ads are not all of it.  Super Bowl ads comprise a little ecosystem.  Many advertisers ran teaser ads in the weeks before the game.  The most well-known of these was done by Planter’s Peanuts, which developed a story line about the death of Mr. Peanut, and with changes to the final ad and its timing following on the death of Kobe Bryant.

It is also not uncommon for the short ad run during the game be structured as part of an “extended” version which can be viewed online at one’s leisure.  Porsche’s mini-film “The Heist” is available in both short and extended versions.  Both are worth seeing relative to our interest in social messaging.

Once all the commercials have been seen we can begin the process of sorting and looking for themes.  Here I tried to avoid starting with too much by way of preconceived notions.  Rather I wanted to let the ads speak for themselves, looking for themes and categories that arise from the material itself.

If all you want to do is demonstrate a woke theme it is not hard to do.  Just find an ad where it is in your face and show it.  But that is anecdotal.  It would be better, and more useful, to be able to make reasonable generalizations about the whole schmear.

That desire to get a grasp of the whole leads to a set of questions.

1.  What are the various means by which social messaging is expressed?

2. What is the proportion of ads with some recognizable social messaging to ads that seem to be neutral?

3.  Where a social message is apparent what is the proportion of woke to (for want of a better word) non-woke.  We know we will see woke themes.  Will we see traditional ones too?

4.  If an ad has a social message not in tune with woke what does that message consist of?  Even if there are no remaining Carl’s Jr.-style big boob ads (and there are not) are there ads that simply present a more traditional view of masculine behavior?

There are no more Carl’s Jr. ads or anything like them.  But it goes beyond that.  White males were seldom portrayed in a positive fashion.  Often they are shown to be clueless, weak or just very uncool.   There were only a few instances where traditional masculine behaviors or traits were displayed positively by white characters, and even there caveats and conditions apply, as we will see.

Woke is expressed in different ways, some more explicit than others.  Here are some.

Gainfully employed for thirty years, including as one of those high paid college administrators faculty complain about. Earned Ph.D. late in life and converted to the faculty side. Those damn administrators are ruining everything.
View all posts by Fenster →
This entry was posted in Sex, Sports, Television, Uncategorized and tagged Super Bowl, Super Bowl commercials. Bookmark the permalink.