At the risk of tossing out an oxymoron, here is an excellent article from Vox: What Donald Trump gets about the electorate, by Lee Drutman.  The very title seems out of place in Vox in that it gives off the unmistakable aroma of sympathy for Trumpism, if not Trump.

The explanation for this odd occurrence is two-fold.  First, the article dates from August 2015, just two months after Trump announced his bid for the presidency and well before hysteria became de rigueur in all the right precincts.  Second, it is written by a guy at New America, a think tank that tilts left while still allowing for research and scholarship that is not insane.  The brilliant Michael Lind, who I have written about here and here, was one of the founders of New America and is a colleague of Drutman.

Drutman’s article is somewhat of a piece with Lind’s work in that both favor clear thinking about fundamentals over fake scholarly spin, with the result that the zany Schrödinger’s Catlike features of the current landscape, with left and right being both what they are and their opposites at the same time, can be made explicable. Fenster is fond of saying all irony disappears under the microscope, and the same can be said of many conundrums.  A single penetrating insight can be a mighty cutter of Gordian Knots.

Drutman’s short article reveals a lot about our current situation.  It is a shame it seems to have been shoved down the left’s memory hole.  They would be wise to dust it off and take another look.

As the punditry attempts to make sense of the continued popularity of Donald Trump, the prevailing establishment narrative has been simple: He’s an anti-establishment buffoon; he’s channeling an angry mood; his moment will pass. But as Ezra Klein argued on Monday, this narrative may be wrong. What if Trump actually represents a sizable electorate that Beltway elites have marginalized?

Drutman thinks this is the case, and he does more than pontificate.  He analyzes National Election Studies (NES) data with an eye toward categorizing the electorate into broad categories based on opinions on two key issues: Social Security and immigration.  In each case voters were given three options: more, less or stay the same.

Two quick summaries can get us started.

The first looks at how people feel about Social Security:

The obvious but important point here: Promising to decrease Social Security, as many of the Republican candidates are now doing, is a real loser with the public.

The second summarizes how people feel about immigration:

Another obvious and important point here: There is very little support for any policy that the public perceives as increasing immigration.

But the real key is to understand how these two issues fit together.

I refer you to the article for detail, where the devil resides.  But in the end Drutman creates five buckets and populates them thus:

In short the Republican platform was being driven by the latter two tiny categories and ignoring a large populist dimension.  Since the article was about Trump it did not directly address any lessons the Democrats might learn–this is Vox, after all.  But there are lessons to be had.

In his excellent new book The New Class War Lind picks up the thread, taking another close look at Drutman’s analysis and extending it over the the Democrat side. 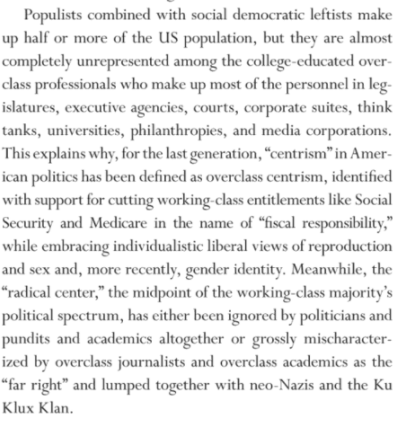 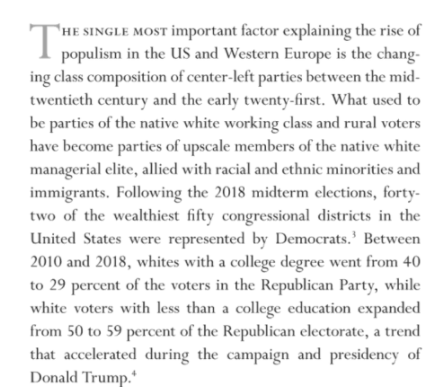 Considered with this in mind the “realignment” currently underway is not nearly as paradoxical as some would have it.  It is mostly a matter of elites in both parties resisting the views of the voters.  This alliance, if you will, between elites in both parties conspiring against the voters works best if both parties stick to their respective scripts.  In a two party system there is as a practical matter nowhere to go but to the two main parties, as George Wallace, Pat Buchanan and Ross Perot all found out.

Trump’s unforgivable sin is that he called an end to the party, so to speak.  In buying low and selling high on the Republican side he put in motion a dynamic that is now finding expression among the Democrats, who have yet to figure out how to put down their own rebellion.

The ongoing realignment is not surgery.  It is chiropractic.  Deep and painful chiropractic to be sure–Rolfing perhaps.  But there is a skeleton in there that needs to be freed up.

More on Lind here and here.