Vegas: Land of 1,000,000 Women in Hooker Dresses and Their Shlubby Guyz

The architecture is great and all (and I’ll return to it), but Vegas is one of the great people-watching destinations. So let’s take a look at the indigenous wildlife, shall we? [1]

It quickly becomes apparent that all attractive women between the ages of 18 to 35 use the city as an excuse to break out their Hooker Dresses. Here’s a picture of Heather Graham modeling the basic style. 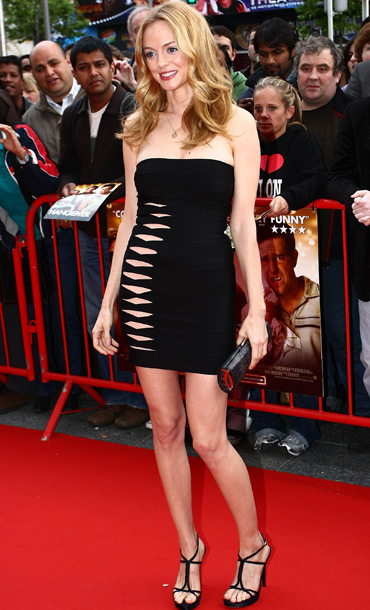 Those cuts on the right side notwithstanding, all the elements are there: low-cut, short, and tight with strappy heels. Variations allowed for, of course (I mean, we’re talking about women here), but that’s the basic template the ladies work from. A couple of examples, taken at The Palazzo and Mandalay Bay:

(Pardon the rear shots, as it were, but I haven’t yet perfected my walk-up-to-strange-women-so-I-can-take-snaps-of-them-for-my-blog Game yet.)

So the galz know what they’re here for, but what about the guyz? They’re, uh, less impressive. “Collapsed manhood,” as a friend put it. A harsh assessment, but perhaps appropriate. I mean, look:

Don’t get me wrong — the dude is perfectly presentable…if he’s dressing to go to the grocery store. But when your girl puts on the dress with the spaghetti straps and heels, you might wanna put in a little more effort than just a t-shirt and khakis, fer crissakes. (Check out the beta stance he’s got goin’ on too.)

Alright, to be fair, some try a bit harder:

Nicer shirts, at least. Still, the girls look smokin’ hot (the dress that blonde who’s staring at me is wearing can’t be much shorter) but the guys look just OK. Those untucked shirts aren’t doing them any favors. Seems like a good rule of thumb is, if your woman is gonna put on the Hooker Dress, you can at least put on a sport coat, if not ideally a suit. Look at how the women are being ignored, too. Guy on the left is checking those oh-so-important college football scores I’m guessing, and the dudes on the right are talking to each other.

I don’t have any pictures unfortunately (some data I can gather next time I visit), but I spotted plenty of guys who were dressed well. Nice suits, no ties, and they looked comfortable too. Many such men looked like they were Middle Eastern or some other ethnicity I couldn’t quite place. Regardless, they were from cultures where men are taught how to dress when spending a night on the town with a lady.

But for every descendent of Cary Grant that one saw, there were about 100 of these:

Look at her: hair done, striding confidently, surveying the casino like she just bought it. You know she’s been looking forward to this trip. She indulged in an expensive pedicure and manicure this morning, chose her favorite color, that shade of red she just loves. You know she’s waiting for just the right moment tonight (On the dance floor? Sometime during dinner? When it’s time to slip into something more comfortable?) to take that pin out of her hair and let it come tumbling down. Meanwhile, look at him. LOOK AT HIM:

A comic tragedy of errors: 1) the rumpled, untucked denim shirt, 2) the shorts (shorts!), 3) the Man Bag, and finally, 4) the flip-flops. The only thing that would make this absolutely perfect is if he was fishing a baseball cap outta that bag.

[1] Your friend and humble narrator realizes that he is one of the last people who should be passing judgment on the sartorial choices of others. Yes, he is fully aware of this and shall proceed full steam ahead anyway.

[2] This is my way of saying I don’t know what I’m talking about so I need your cultural-anthropological insight.

25 Responses to Vegas: Land of 1,000,000 Women in Hooker Dresses and Their Shlubby Guyz