Letter from China: All Chinese Animals Numerous; Some More Numerous Than Others

I am at a meeting with a senior official of the provincial education department.  We are discussing the state role in higher education.  Today, I am more reliant than ever on my translator since the official, though clearly worldly and well-educated, knows no English at all. Also, my translator is a bit out of his depth on matters of policy and finance.

I am asking a series of questions in which I hope to draw out from the official his own account of the problems the state faces in terms of policy, and that he faces personally as a policy-maker.  It is tricky ground for me relative to my questions.  I am new to the country and have not yet gauged what is appropriate and what is out of bounds.  And my translator is struggling a bit with his task.  The picture that emerges is that of a competent but overworked senior bureaucrat struggling to hold it together.  That’s common in governments around the world.

If you’ve been involved in a discussion which is being simultaneously translated in real time, you will know how it can be difficult to get the full meaning on the fly.  The back-and-forth of just a one language conversation takes for granted a remarkable amount relative to nuance, word meanings and meta-language.   When you get to the squishy terrain of a translated discussion, you worry that you may suddenly find yourself having jumped the tracks, with the conversation now rolling along on a discarded rail line to Manchuria.

I ask a question and I get what amounts to a hard-to-fathom snippet back from the translator: “so many people.”  Like I am supposed to know what that means.  A few questions later the translator seems to be struggling and once again brings back that concept: “as you know from the Commissioner . . . so many people”.  The same phrase then arises yet a third time, a few minutes later.

2. But So Few Kids in the Park

Knowing that cultures differ, I was expecting a lack of dogs in China.  And sure enough, other than a few petite and pampered Pekinese out for walks and scrawny runty mutts wandering the streets, dogs are scarce.  No big and meaty ones to be seen at all in fact.

Oddly enough, since I know there is a one child policy, it took me a little longer for it to sink in that kids are almost as scarce as dogs.  And while seeing two dogs together out for a walk is not all that uncommon, seeing two little kids playing is quite rare.

Whereas in American family of five its three kids fighting for two parents, in the modern Chinese family it is one kid being doted on by four or even six: parents plus grandparents.  And sure enough, a walk through the park revealed few kids–singletons when they were visible-as well as doting parents and grandparents.

Here is a snap of Central Park. 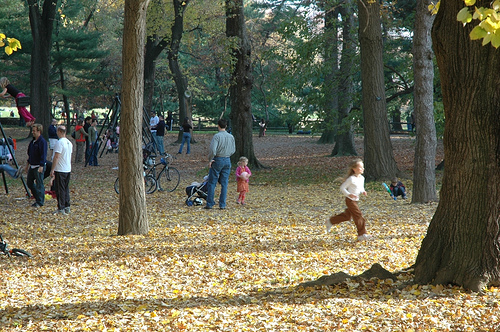 By contrast here is a snap of a lovely park in Jinan, a meandering set of springs in the center of the city.

Can you find the kid at all?  Ah, there he is, in the center of the picture, one little one being carried, and surrounded by a sea of adults.

I found myself taking pictures of little kids.  Well, for one they are just so damn cute at that age.  But I think I was also subconsciously reacting to their scarcity value as photographic subjects.  Look!  A cute kid! Snap ‘em up fast since you don’t know when you’ll see the next. 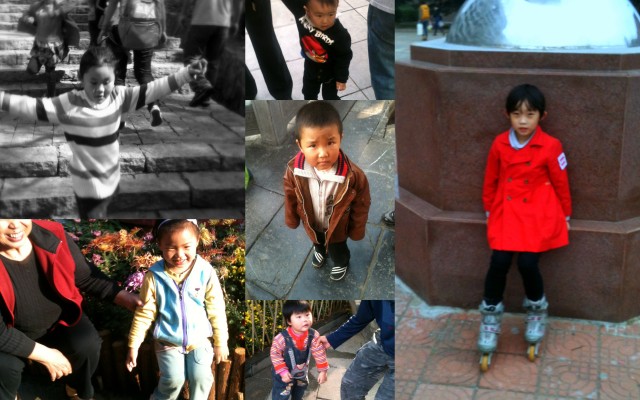 Gainfully employed for thirty years, including as one of those high paid college administrators faculty complain about. Earned Ph.D. late in life and converted to the faculty side. Those damn administrators are ruining everything.
View all posts by Fenster →
This entry was posted in Personal reflections, Travel. Bookmark the permalink.

2 Responses to Letter from China: All Chinese Animals Numerous; Some More Numerous Than Others