Critics just can’t seem to get enough of re-appraising the long form Heaven’s Gate.  In yesterday’s Boston Globe, Ty Burr added to the buzz with his own long form article, the chief benefit of which was that he used the space to take apart most of the claims to the film’s greatness.  I admire that view but continue to wonder why the fuss when the 219-minute version was available on VHS a few years after the 1980 theatrical release, and with a brief foray back onto the big screen in 2005.  It made me despair of all the talk of greatness revealed if only we could see the Great Artist’s unsullied vision.

Then I secured a DVD with the “extended cut” of Kenneth Lonergan’s Margaret, and revised my cynicism about unsullied work by the great artist.  The three-hour Margaret was, for me, an astonishing experience. 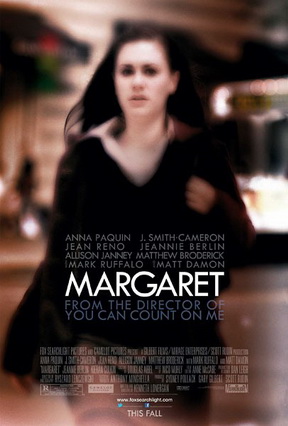 This is the long version that Lonergan was unable to cut back to the 150 minute maximum he had been allowed by the studio.  Martin Scorcese and Thelma Schoonmaker were brought in with scissors to do the deed, with the shorter version seeing theatrical release.

I haven’t seen the theatrical release and don’t know what was cut.  To be fair, the long  version does include lots of subplots, minor character development and musical/visual interludes that one could argue could be cut with little loss of narrative power.  Indeed, one could argue that a conventional narrative would benefit from a fair amount of trimming.  But Lonergan does not seem that interested in  a conventional narrative, and bully for that.  I found myself luxuriating in the meandering and meditative quality that is in ample supply.  I know the old adage about good writers needed to kill what they love with the editor’s pen, but I for one am extremely pleased he spared as much of his vision as he did.

Lonergan’s dialogue is distinctive.  Pinter is a master of the pause and Mamet the fuck-you.  Lonergan is the master of the missed connections in conversation, and of people talking past one another even as they struggle to address the other.  On its face, conversation is about character’s expressing themselves through verbal exchange.  In fact, our own life conversations are all-too-often stunted, running off in unclear directions since the interlocutors are often not clear about what it is they actually wish to reveal, or to express. Good conversation–healthy conversation–is cumulative and iterative.  Many of Lonergan’s characters show a tendency to serial monologues while in apparent conversation.  They just have to say what they have to say.

The performances are stellar.  I don’t usually like Anna Paquin and, truth be told, I didn’t like her here that much.  All the better for that slightly obnoxious and overbearing quality–it is the heart of her character Lisa.  Lisa’s mother is played by Lonergan’s real-life wife, J. Smith-Cameron, a stage actress of apparently some repute (I have never seen her before) who brings the right nuance and depth to the role.  Elsewhere–well, where else will you find Jeannie Berlin, Mark Ruffalo, Jean Reno, Allison Janney, Matt Damon and Matthew Broderick?

I don’t risk spoiling the plot, such as it is, to at least say what it is about.  It’s Woody Allen terrain–Upper West Side.  Lisa, a 17-year old high school student, finds that her way-too-advanced cognitive and intellectual abilities are way outmatched by life.  She witnesses–well, she more than witnesses–a terrible accident, and is set to grapple with the meaning of the event, and her part in it.   Yes, she is a drama queen, and you cringe when she acts out.  Still, there is something gritty and admirable about her struggling, as she tries over and over again to counter the senselessness of events with the few inadequate tools at her disposal.

When called out by an older friend for being a drama queen, her response:

You think I am making this into a dramatic situation because it is dramatic?. . .

I think you are very young.

What does that have to do with anything? If anything it means I care more than someone that’s older.  Because this kind of thing has never happened to me before.

And as it turns out, there is some truth to what she is saying.  The adults don’t have a ton to add to her learning, save to point out that life involves a certain getting used to.

Daniel Kahneman has written, “the world makes much less sense than you think. The coherence comes mostly from the way your mind works.” In a sense, Margaret is just another coming of age story, though it is one that shows quite plainly what is gained and what is lost in the forging of mental constructs we refer to as maturation.

Gainfully employed for thirty years, including as one of those high paid college administrators faculty complain about. Earned Ph.D. late in life and converted to the faculty side. Those damn administrators are ruining everything.
View all posts by Fenster →
This entry was posted in Movies. Bookmark the permalink.