Swedish film pioneer Mauritz Stiller is known mainly for his connection to Greta Garbo; it was he who brought her to MGM. But in the 1910s and early ’20s he was a major force in movies, perhaps the era’s only Scandinavian director who could challenge Victor Sjostrom in terms of sophistication and artistry. Stiller’s surviving output suggests that he favored two types of movie: the poeticized nature parable of “Johan” and “Gunnar Hedes Saga,” and the urbane, suggestive comedy epitomized by his 1920 “Erotikon.” “Thomas Graal’s Best Film” belongs to the latter category. Released in 1917, it’s a reflexive, curlicued farce set within the world of silent filmmaking, and for fans of romantic comedy it may come as something of a revelation.

Sjostrom plays the title character, an actor and writer who is prone to procrastination: he’s kept a film company waiting months for a promised screenplay. Meanwhile he dawdles away in his flat, absentmindedly dictating to his secretary, Bessie, while lounging about and chainsmoking cigarettes. When Bessie isn’t secretarying she’s doing her best to evade Thomas’ romantic attentions, and she finally quits the job — with a smack — when her employer steals a kiss. Stiller underscores the action with an odd but memorable detail: the blow breaks the skin, and Thomas, rubbing his face in dismay, inadvertently smears blood across his cheek; the moment has a rawness which belies the farcical set-up. (Here and elsewhere Sjostrom is excellent. A big man with a limber body and an expressive, jowl-ready face, he’s able to suggest a masculine force which is subverted by a needy, almost adolescent unctuousness.)

It’s at this point that Thomas and Bessie cease to occupy a shared movie space: the narrative bifurcates and the movie becomes a comic battle between opposing fictions. As if to signal this break, Stiller inserts an odd sequence which plays a bit like something out of a Feuillade thriller: a pair of men in identical bowler hats stalk and kidnap Bessie, then scuttle her into a waiting automobile. Bessie, it turns out, has run away from her aristocratic parents; they intend to marry her off to a count, and the bowler-hatted men have been hired to fetch her back. But this information is reserved for the audience; Thomas is largely ignorant of it. We don’t get his understanding of events until he finally begins to write his screenplay — which, of course, is based on his recent experience with Bessie. In tackling this subject Thomas is trying to mollify the wound sustained by his masculine pride, but he’s also attempting to ennoble his intentions — to make them seem like more than mere sexual impulses.

As he writes, his first meeting with the girl unspools in the manner of a conventional movie flashback. And yet it’s apparent that what we’re seeing isn’t wholly the product of Thomas’ subjective experience. An intertitle tells us what Bessie is feeling. More importantly, this flashback contains within it a series of secondary flashbacks, and these contradict what the container flashback — that is, the fiction created by Thomas — is telling us. These vignettes, inserted into the film as Bessie regales Thomas with tales of her parents’ cruelty, make it clear that the girl is fibbing (they reveal that her homelife is pretty comfy), and they set us the unusual task of negotiating a movie that is comprised of multiple misrepresentations. 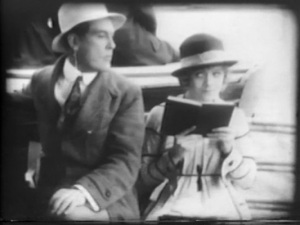 From here, “Thomas Graal’s Best Film” only gets more complicated. Upon finishing his manuscript (it’s called “The Adventuress”), Thomas tells his employers that he’ll act in the movie only if Bessie is cast as the female lead. This stratagem has a dual purpose. It provides Thomas with an effective means of luring Bessie back into his life. But it also gives him an opportunity to replay his relationship with her — to, in effect, recreate that relationship under the aegis of his self-flattering screenplay. In some ways Thomas is reminiscent of Jimmy Stewart’s Scotty in “Vertigo”: his (very male) point of view has the potential to become dictatorial and suffocating — to dominate Bessie in the way that observers later accused Stiller of dominating Garbo. But Bessie is no Madeline. She has her own plans for her future — plans which may or may not involve Thomas.

This playful tension between the wills of Thomas and Bessie is what makes “Thomas Graal’s Best Film” a romantic comedy rather than a thriller, and in many ways it anticipates the screwball tradition of the ’30s and early ’40s. This is perhaps most evident in the performance of Karin Molander, the actress who plays Bessie. Shapely, lively, with a cupie-doll face that has a built-in suggestion of deviousness, Molander animates the movie as Stanwyck does “The Lady Eve” or Colbert the “The Palm Beach Story” — she’s the gravitational force which keeps everything spinning. Like the archetypal screwball heroine, Molander’s Bessie is an heiress on the run from humdrum propriety, and she’s flamingly, unapologetically modern. Stiller highlights this latter attribute via a recurring motif involving cigarettes, which he associates solely with men throughout the early portions of the film. When he finally violates the maleness of the device by having Bessie brazenly light up in front of her father — it happens right after she’s forced him to nix the arranged marriage — there can be no doubt as to who has emerged victorious. As father and daughter recede on horseback, their backs turned to the camera, smoke plumes out from behind Bessie’s head; it’s like steam pouring out of a hot-firing engine.

The film’s attitude towards cinema is no less modern: there’s little of the moralizing which colors the depiction of performers in Urban Gad’s “The Abyss,” a movie I wrote about back here. Rather, movies are depicted as a mortar where identity and class are ground up and blended into new, interesting, and even outrageous mixtures. In it’s semi-satirical celebration of the social disruptiveness of the movie industry, “Thomas Graal’s Best Film” prefigures Hollywood send-ups of later decades, the 1933 “Bombshell,” for instance, or the 1928 “Show People.” In fact, the star of the latter film, Marion Davies, resembles Molander in a number of ways. This is most evident in a scene showing Bessie celebrating her transfiguration from aristocrat to movie star by mimicking the Nazimova mode of dramatic overacting. A funny bit, it plays like the precursor of the famous scene in “The Patsy” in which Davies, wrapped in scarves and pulling exaggerated faces, impersonates screen icons like Lillian Gish and Pola Negri. Though the two scenes can be taken simply as laugh generators, they also have a deeper suggestiveness: both are riffing on the appeal of movies as an engine of self-invention and a leveler of class distinctions.

Around the middle of “Thomas Graal’s Best Film,” Bessie runs away from her parents a second time, but her flight is halted by an apparent crime taking place on the road she’s using. Riding on her horse to the victim’s defense, she’s shocked when her act of heroism is interrupted by the shouts of an angry movie director — she’s spoiled a scene being filmed for a movie. It’s not all bad, though: the director is thrilled to discover that Bessie is the girl he’s been looking for — the star Thomas wants for “The Adventuress.” Bessie, it turns out, has escaped right into a movie based on her own life.

This idea of life turning into a movie and then back into life again strikes me as having been one of the key artistic themes of the 20th century.  In many ways it’s a theme that’s still with us, though now our lives are so informed by media — so posed for the camera — that to call it a “theme” hardly seems sufficient. It’s more like an aspect of our national lifestyle, each of us having assumed the roles of both Galatea and Pygmalion, constantly in thrall to the seductiveness of our self-images. Although “Thomas Graal’s Best Film” ends disappointingly (all the tension goes out of the romantic narrative once Bessie gains the upper hand), it presents an opportunity to examine this idea in embryonic form, and to wonder just what life was like before we had the movies to fall back on.