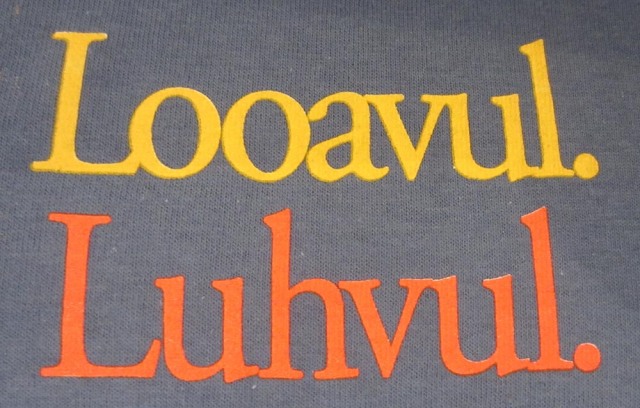 The Question Lady and I recently returned from a week-long stay in Louisville, Kentucky, our second time there. She had a date to perform her dynamite one-woman show at the wonderful Bard’s Town Theatre, and we decided to make a real visit of the trip.

Have you been? We love the place. It has numerous beautiful and/or enjoyably-funky neighborhoods; there’s loads to do and explore; the regional-confidence level is gratifyingly high; the downtown is alive; and the cultural scene is flourishing along a nice continuum from stuffy-trad to genuinely-pretty-edgy. Lots of charm, and of a sweetly lackadaisical kind that makes me feel very beguiled and content. I wouldn’t wish June (let alone July or August) on anyone — the temperatures regularly hit the muggy mid-90s. But we’d happily spend a few spring or autumn months every year in Louisville. Here’s a little collage of views along the city’s hip E. Market St.

And good lord is it a friendly place. In our couple of weeks there I don’t think we’ve encountered a single soul who wasn’t open, gracious, and eager to chew the fat. Even the hipsters go about their hip things without excessive irony, attitude and spikiness. A big plus is the city’s size — it combines the virtues of a small city with those of a big city — and its location, near what’s said to be some of the world’s prettiest horse country. Thanks to a lovely new acquaintance — who says that Facebook is a waste of time? — we got to spend a day meeting horses and horse-people.

Kentucky bourbon is also something that also demands attention, and we — OK, I (the Question Lady doesn’t do well with spirits) — devoted some significant efforts to it. Brief summary: Hey, there’s a whole world of Kentucky bourbon out there beyond Maker’s Mark! Touring distilleries turns out to be a very satisfying way to spend an afternoon. A visit to Woodford Reserve’s distillery, for instance, wasn’t just informative, it delivered a lot of architectural delights.

Eat — or rather drink — that, Piranesi. Fun, too, how bedazzled-yet-friendly people being shown around a distillery tend to be. But maybe that’s just the kind of mood that being at a true Source puts people in. Take a look at this big vat of bubbling, warm mash, for instance:

If that doesn’t bring out the awestruck worshipper in you, then you aren’t a real drinker.

Despite all the other pleasures on offer, what has most amazed us about Louisville is the quality of the eatin’.  During our recent visit we indulged in fine dining six times, and we didn’t have one not-terrific meal. Now, our standards are pretty darned high. The Question Lady and I live near the East Village in New York City, a neighborhood where a lot of the country’s most talented and ambitious young cooks get their professional starts. So when we go out we’re used to eating pretty darned well. The Louisville restaurants we explored all delivered at an East Village level. Nice too that their prices are about 1/2-2/3 of what we’d pay in NYC.

By the end of the week my reporter instincts had kicked in. I’d gotten curious: How to explain the big-city quality of the eatin’ in Louisville? I chatted with acquaintances and restaurant people; sadly, no one could give me a satisfying answer. “It’s a mystery, but it’s definitely true that the food here is great!” was the general consensus. Then we’d get back to what most of life is about in Louisville: story-tellin’, eatin’ and drinkin’.

Anyway: wonderful place to visit, and — if you do go — make plans to dine out as often as you can. If you’re curious about our eatin’ adventures, check out this little album of snapshots of our meals. iPernity, where the photos are stashed, seems like a nice alternative to Flickr for those who have fallen out of love with Flickr, btw.

Our pick of Louisville’s restaurants

Onetime media flunky and movie buff and very glad to have left that mess behind. Formerly Michael Blowhard of the cultureblog 2Blowhards.com. Now a rootless parasite and bon vivant on a quest to find the perfectly-crafted artisanal cocktail.
View all posts by Paleo Retiree →
This entry was posted in Food and health, The Good Life and tagged bourbon, charm, dining out, food, Harvest, horses, Jack Fry's, Lily's, Louisville, restaurants, Rye. Bookmark the permalink.

12 Responses to Eating in Louisville