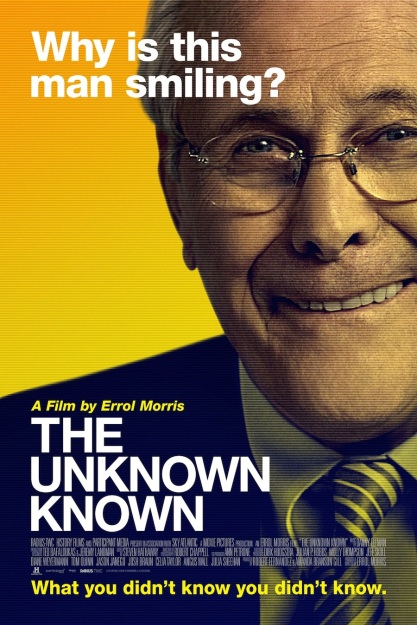 Have any UR readers watched “The Unknown Known,” Errol Morris’ documentary on Donald Rumsfeld? It’s on Netflix Instant. I caught up with it last week and found myself fascinated by its lameness. For 100 minutes Morris — one of the favorite non-fiction filmmakers of “The New York Times” — asks questions of Rumsfeld, and the former Secretary of Defense answers them exactly as you’d expect him to. Since nothing particularly interesting is said — the explanations and rationales are retreads of ones from the early 2000s — Morris is forced to rely on his (and the audience’s) preconceptions of Rumsfeld to lend political and moral weight to the proceedings.

Morris seems to take Rumsfeld’s villainy as a given. For him, there’s nothing to discover in his subject — nothing to reveal — because we all know that Rumsfeld is Hitler. The picture, then, is less a delving into Rumsfeld and the circumstances surrounding the War on Terror than a record of Morris’ interface with this Great Satan.

I’m certainly no fan of Rumsfeld the politico and warhawk, and to a certain extent I’m sympathetic to Morris’ POV, but this strikes me as a crummy way to approach a documentary. I’m not particularly interested in being flattered for my biases  — and certainly not for a full 100 minutes. While the movie didn’t bring me to a new understanding of Rumsfeld, it did help me clarify what’s often bothered me about Morris: his comfortable, floating-above-it-all smugness. It’s rare that Morris really engages with his human subjects, or dares to dig into them. Instead he holds them up to the camera for the scrutiny of his audience. Compare his “Gates of Heaven,” which treats the proprietors of an animal cemetery like icky zoo creatures, to Terry Zwigoff’s “Crumb,” a searching and consistently surprising work that follows its (still rather icky) subject right down the rabbit hole of his weirdness. Morris’ distanced, on-the-surface approach has been lauded as deeply suggestive. I think it’s often a cover for self-satisfied complacency.

Is there a way to be more generous towards Morris? Possibly. In a long discussion about the movie, Paleo Retiree told me that he suspects Morris simply doesn’t get Rumsfeld — that he lacks the background and sensibility (and perhaps the imagination?) to see Rumsfeld for what he is, a driven, Midwestern management sort who’s adept at gettin’ shit done. This view holds that Rumsfeld’s type is so alien to Morris that he’s incapable of registering its positive qualities, like intelligence, diligence, and competence. (Say what you will about Rumsfeld, there’s little doubt that he’s a very capable man.)

Fair enough; I buy it.

Still, I’m not sure it explains Morris’ rush to assign such dastardly intentions to Rumsfeld’s actions and rationalizations. Like Paleo Retiree, I came away from the picture suspecting that there isn’t much to uncover regarding our unfortunate involvement in Iraq and Afghanistan. It seems at least possible that the whole affair really is as straightforward as we’ve been told: That Bush and his team were horrified by 9/11, vowed to protect the country, and then made a bunch of (sometimes disastrous) decisions aimed at following through on that vow. If so, there’s an interesting story there, one rife with opportunities to foreground the naivety and foolhardiness of the Bush administration. But that’s not the story Morris wants. He wants to show us that Rumsfeld and his cohorts are archvillains and liars. Because he comes up with so little in that vein, the movie ends up feeling like a series of anticlimaxes, with Morris repeatedly whisking back the curtain to reveal frumpy old Frank Morgan rather than the Wizard of Oz.

What to make of Morris’ rush to judgement? Maybe his default setting is to view non-liberals as devious? Certainly he wouldn’t be the first person to ascribe to base motivations what is more reasonably chalked up to a difference in outlook or attitude. For Morris, perhaps, Rumsfeld’s flourishing outside of the left-liberal belief system is all the proof of malevolence that’s needed. Indeed, so strong are Morris’ partisan inclinations that he’s wont to detect insidiousness where even many of his political allies can’t sense it. On Netflix, several left-leaning reviewers take the movie as being an exoneration of Rumsfeld — and they’re rightfully pissed about it. They either don’t realize that Rumsfled has eluded Morris’ traps or they haven’t fully subscribed to the filmmaker’s insider-y brand of zealotry.

(The real True Believers react differently. They know that everything that comes out of Rumsfeld’s mouth is untrue, and they celebrate Morris for documenting Rumsfeld’s capacity for falsification. Using their logic the movie’s greatness is inevitable, because all of Rumsfeld’s words are lies, and everything Morris films is proof of those lies.)

Because Rumsfeld comes across as reasonable, Morris resorts to heavy-handed impositions to highlight his supposed duplicity and lack of intelligence. After Rumsfeld describes Saddam Hussein as a strongman in thrall to his own self-fantasy, the camera stares dumbly at Rumsfeld for a few extra beats. It’s a Morris trademark, his way of making you feel like you’re in on some joke. (Morris isn’t above pinning “kick me” signs to the backs of his subjects. This tendency extends to the film’s poster, which is designed to make Rumsfeld look like an unprincipled moron.) But even if we accept the filmmaker’s invitation and allow ourselves a chuckle, it’s hard to accept his premise, which is that Rumsfeld is too stupid to realize that he and Saddam are birds of a feather.

Firstly, it’s pretty obvious that Rumsfeld has more in common with the CEO of some powerhouse corporation than he does with those cartoon tyrants who make speeches in front of billboards depicting themselves holding a child in one arm and a firearm in the other. Morris’ suggestion, which is ludicrous on its face, is nothing more than a cheap way of scoring points. (Rumsfeld hints at some affinities with one of Saddam’s underlings, a slick-looking guy in a business suit, but Morris rushes right past that.) Secondly, Rumsfeld doesn’t come across as lacking in self-awareness. In fact, just the opposite seems true. You get a sense of this when he discusses the abuse of prisoners at Abu Ghraib. Recounting how he attempted to resign in the wake of the scandal only to be rebuffed by George Bush, his regret seems heartfelt. You sense it again when he admits that the country might be in a better state today had he never served in the Bush administration. In both instances Rumsfeld seems to have reflected on Morris’ questions and come up with responses that are searching and sensitive. Of course, none of this absolves Rumsfeld of the mess that is the War on Terror, but I suspect it’s the most we can expect of a powerful man asked to comment on his failings.

Morris’ heavy-handedness is also evident in his reliance on animations, most of them depicting dictionary cites and written memos. Rumsfeld was fond of using both to clarify his thinking, but to Morris this fixation on language is evidence of self-infatuation and a willingness to use verbosity to conceal a deeper cunning. He gives us shots of piled-up memo boxes in an attempt to evoke the final shot of “Raiders of the Lost Ark,” in which the proof of government chicanery is forever buried in some anonymous warehouse, and Danny Elfman’s incessantly swooping score makes us feel as though we’ve been engulfed in a maelstrom of disinformation. Maybe I’m just gullible, but all of this struck me as a lot of fuss whipped up over nothing. A more open-minded observer might consider Rumsfeld’s interest in definitions and memos and conclude that the guy likes words. Big whoop. I suspect that Morris, recognizing that he lacked sensational content, decided during the editing phase to make the movie a demonstration of Republican doubletalk. It amounts to pretty weak tea.

Rumsfeld’s passion for memos generates one of the movie’s most eyeroll-inducing “gotchas.” While quoting one of his more well-known jottings, Rumsfeld transposes a couple of words. Morris then points out that he’s misquoted his own aphorism, and Rumsfeld wonders whether he got it wrong or his secretary mixed up the words while taking dictation. To Morris, this is a major fucking deal. Rumsfeld is lying! Or maybe he’s too stupid to remember what he said 12 years ago! At the very least his secretary has been caught in a typo! You’d think Morris would be embarrassed to use something this measly as his big reveal. Nope. It’s his parting shot, the capstone of the movie.

14 Responses to “The Unknown Known”