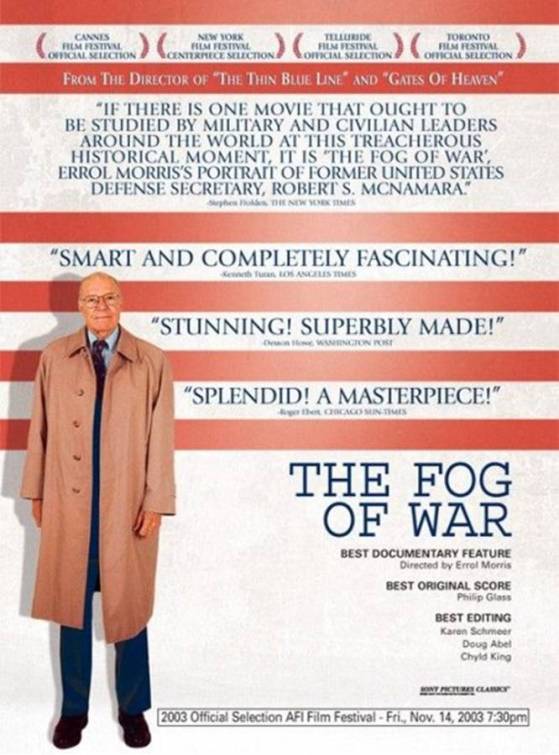 Bugged and annoyed by Errol Morris’s recent movie about Donald Rumsfeld (which Fabrizio dealt with thoroughly here), I just caught up with “The Fog of War,” Morris’ 2003 visit with Robert S. McNamara, the former Ford Motors “whiz kid” who, as Secretary of Defense, implemented a lot of JFK and LBJ’s Vietnam War policies. Morris’ fans find the film much more satisfying than “The Unknown Known.” Would I too?

The two movies are certainly different viewing experiences in some respects. Where Rumsfeld showed up before Morris’ camera in a proud and assertive mood — to make his case, to defend his acts and to shore up his reputation — McNamara was, very late in life (he died in 2009 at 93), eager to admit to misgivings and grief. The Vietnam War was a tragic mistake, he now feels. In fact, McNamara argued at the time with Kennedy and Johnson about the wisdom of pursuing the war; Morris turns up audio evidence of this. McNamara sheds some tears of remorse, and (unlike the feisty Rumsfeld) often speaks with a great deal of emotional stress in his voice. We need to know that life is difficult, leaders are people too, the human costs of political blunders can be tragic … According to Morris fans, the film is thereby richer, more emotional, more revelatory.

I was torn. I found it very interesting to be reminded of the history and to meet the person. The movie covers McNamara’s middle-class California childhood, his time in the U.S. Army Air Force in WWII and his career at Ford as well as the Vietnam debacle (it leaves out his years at the World Bank). He was a brilliant student (Berkeley and Harvard Business School) who really wanted to be a professor, but the era and his virtuosity with statistics sidetracked him into industry instead, and his successes at Ford attracted the attention of JFK.

The picture isn’t a definitive account of events and it doesn’t try to be — that’s for other books and movies. Morris is more interested in exploring McNamara’s point of view than in challenging him. So the movie at its most basic level is an enlightening visit to another era, a time when the country’s economy, influence and power were growing by leaps and bounds, and when engineering-and-MBA-style expertise and rationality were thought to confer superhuman powers.

It’s interesting too to experience the Vietnam War years through McNamara’s mind and eye. McNamara implemented policies and stood up publicly for his bosses while privately feeling and expressing many misgivings. What’s it like to be a hyper-competent, smart guy who helped cause needless death and destruction? Not many of us will ever have that experience. We learn that Johnson in particular felt trapped by the war. LBJ felt he needed to see the war through despite the fact that nobody could figure out what exactly was at stake or what benefits winning the war might confer on us. It’s also interesting and useful to be reminded that even the alphas who we like to believe are steering the Ship of History don’t know at the time they’re making their decisions what’s really going on, let alone where they’re taking the rest of us. We all make it up as we go along, I guess; life is matter of blundering through, and then it’s over. Plus: however horrifying you find the policies of people like Rumsfeld or McNamara, it’s hard to deny that these guys are sharp, capable, thoughtful and (maybe most disturbingly) human.

All the above is OK with me, and it that’s all the movie were I’d give it an enthusiastic thumbs up. But, as with the Rumsfeld movie, Morris’ filmmaking drove me nuts with annoyance. It’s domineering, as well as banal-yet-showoffy. Morris has a rep for being brilliant and innovative, for making sui generis movies, and for having a major gift for turning ideas and intellectual impressions into profound visuals. Yet I nearly always find his filmmaking heavyhanded and literal. The visuals in “The Fog of War” are often shockingly banal. When McNamara talks about the infamous domino theory, Morris shows us — brace yourself — shots of a line of dominos falling down on top of a map of Southeast Asia; when McNamara talks about looking at history counterfactually, Morris runs the dominos-falling-over footage in reverse. These domino images (and there are a lot of them) are artfully lit and composed but they’re about as subtle as a yellow highlighter. I watch Morris’ films wishing he’d stop thinking of himself as a philosopher, more concerned with issues and abstractions than with facts and stories, and really wishing that he’d ease up on the “I’m not a documentarian, I’m a filmmaker” baloney. It’s all unnecessarily busy and intrusive. He never stops reminding you that you’re in the hands of Errol Morris.

All that said, I admit, if very grudgingly, that Morris has got a good instinct for subject matter and that he can be a valuable interviewer. The movie’s worth watching, but if you’re like me it may also make you want to tear your hair out.

Onetime media flunky and movie buff and very glad to have left that mess behind. Formerly Michael Blowhard of the cultureblog 2Blowhards.com. Now a rootless parasite and bon vivant on a quest to find the perfectly-crafted artisanal cocktail.
View all posts by Paleo Retiree →
This entry was posted in Movies, Politics and Economics and tagged documentaries, documentary, Donald Rumsfeld, Errol Morris, movies, vietnam war. Bookmark the permalink.