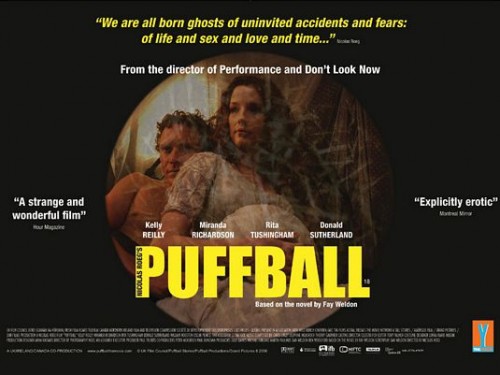 “Rosemary’s Baby” meets “Don’t Look Now” in backcountry Ireland: creepiness, shocks, sex and hints of the supernatural in a very sophisticated, very boho package. Kelly Reilly is a yuppie architect renovating a dilapidated stone house; Miranda Richardson is the witchy head of a weird rustic neighbor family, intent on having one more child. This is one of Nicolas Roeg’s most successfully eerie and beautiful recent films, IMHO, and it features a lot of what he’s best at: elegant montages, committed and far-out performances, casually chic and charged visuals, dreamy sounds, chronology that flits about in ways that might make otherworldly sense … Even the movie’s longueurs cast a spookily erotic, avant-garde-poetry-esque spell. I enjoyed the movie thoroughly. I now search out Kelly Reilly movies too. What a earthy/angelic beauty (and talent) she is.

Onetime media flunky and movie buff and very glad to have left that mess behind. Formerly Michael Blowhard of the cultureblog 2Blowhards.com. Now a rootless parasite and bon vivant on a quest to find the perfectly-crafted artisanal cocktail.
View all posts by Paleo Retiree →
This entry was posted in Movies and tagged Kelly Reilly, movies, Nicolas Roeg, supernatural, thrillers. Bookmark the permalink.

2 Responses to “Puffball: The Devil’s Eyeball”