As a blogger I am obliged to take the side of the pajama-clad reporters against the evil mainstream media.  Why, I happen to be in my pajamas at the moment, too, as I write this.  For the most part I am happy to be part of this gigantic mass deception exciting revolt of the masses.

However, there’s always an other hand and in this case it has to do with the unreliability of reporters in pajamas, who live in an online echo chamber and have not the attention span, wit nor resources to check out a story.   As a result, stories with little or no substance can spread like wildfire and from time to time leach into the mainstream press.

Times Square may have cornered the market on romantic love, but the corner of 28th Street and 5th Avenue has become the go-to place in NYC for fans of onanistic self-love. London-based sex toy company Hot Octopuss opened the “GuyFi” booth at that location this week as a way for men to “relieve stress” in the middle of the workday. Next thing you know, food carts will be selling sex toys.

The masturbatory marketing scheme was inspired by a Time Out NY survey which found that 39% of NY men questioned had masturbated at some point while at work. The out-of-service telephone booth has a black curtain, a folding chair, a laptop computer, and a Hot Octopuss ad along the side.

Reportedly, it was popular from the start.  According to Egotastic—

over a hundred men took them up on the offer in their first couple of days.

So it was not depicted as a publicity stunt or an art installation but rather a going, if not a coming, concern.

Over the next few days the story appeared, in fundamentally the same form, in a number of outlets reporting it as news.  A bit tongue in cheek given the nature of the story, but for sure played straight, as the real thing.  The comments sections on these sites were lit up, too.  Being a suspicious pajama reporter by nature I doubted the veracity of the tale and read the comments sections thinking many others would also assume it was either a total put on or at best a prank.  But no–most of the commenters took it seriously, with reactions ranging from condemnation to mild chuckles.

This was a obviously a press release driven thing and no shoe leather had been expended trying to see if this very public venue even existed.  But it wasn’t only the uniform reporting on the story that bothered me.  It was also odd to me that all of the articles included the same picture–obviously a picture released by Hot Octopuss.  And that the picture strains credibility in itself.

It shows a booth alright, with a guy looking as though he is entering it.  But . . . really?  A phone kiosk with a skimpy curtain?  The idea of an enclosed booth would be hard enough to swallow; the idea of standing in a phone booth, legs exposed, flimsy curtain at your back, jacking off to a computer beggars belief.  Even in New York City, with its New York City values. 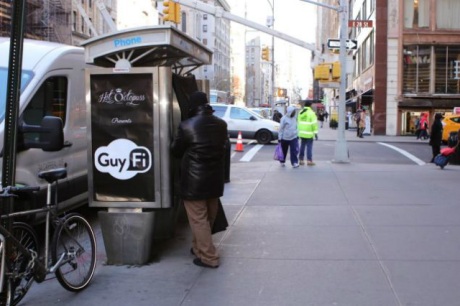 Here is MSN’s piece.  I myself saw a link on Drudge, one that is no longer there.  And in New York itself, The Daily News covered it.  The News wanted to have its cake and eat it too, starting out with a kind of disclaimer:

They must be yanking our chain.

A sex toy company trying to get a rise out of New Yorkers erected a head-turning promotional ploy on Fifth Ave.

Hot Octopuss unveiled what it called a “GuyFi” booth on 28th St. and 5th Ave. where men could, in theory, go to “relieve stress” mid-workday.

The booth was created to “take this habit out of the office and into a more suitable environment designed to give the busy Manhattan man the privacy, and the high-speed Internet connection, he deserves,” Octopuss said in a press release.

The booth was actually an out-of-service telephone kiosk outfitted with a black curtain, a folding chair, a laptop computer, and a Hot Octopuss ad along the side.

and including, or course, the same canned photo.  No real shoe leather.

So your intrepid reporter decided to get out of pajamas, slip into some big boy pants, put on a pair of shoes with real leather, stick a handkerchief in pocket just in case, and go visit.

What did Fenster find?

A phone booth, apparently in service.  Here’s a photo taken from the same angle as the canned photo. 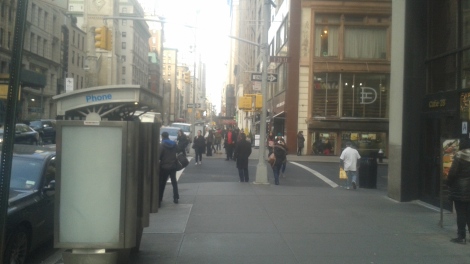 And here is one of the booth. 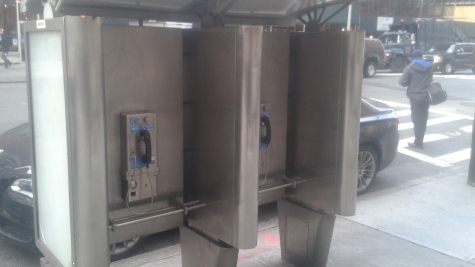 Where is the computer?  Where would a computer even go?  Curtain?  Privacy?   Kleenex?

Now it is possible it was all a very cheesily constructed prank, set to run as a stunt for a few days until people wised up, then disassembled hastily.

And people do seem, slowly, to be wising up.  Snopes ran a debunking piece 3 days ago that claimed it was a stunt but that the the booth was really there.  Again, though, no shoe leather.  So how did they know even that?  The article does not say.  In fact, Snopes ran with the same canned photo.  I have yet to see any photos other than the one that has been running and there has been no actual on the scene reporting.

So I can tell you there is currently no booth.  I can’t tell you, though, whether the entire thing was a photoshopped hoax or whether it was just a clever short term prank.  But as a story it still refuses to die. As of two days ago–a day after Snopes limited debunking– Quartz was still prattling on about the booth.  And here is Salon, swallowing the whole thing, and asking indignantly about a similar booth for women, just yesterday.  People must want to believe. 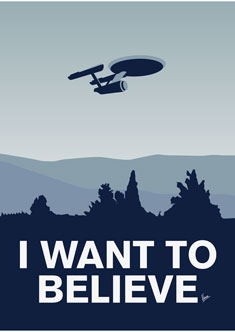