Currently living out of suitcases in a small, furnished sublet far away from our usual city, my wife and I recently found ourselves craving a speaker. Earphone-listening is great but sometimes it’s fun to share music, and sometimes one wants a little music in the background when having friends over. Neither of us felt a need for anything extravagant or permanent. Something small — something not too expensive, as well as something we can travel with — would suit us fine.

We’ve finally settled on a winner, which I’ll share at the end of this posting. But I can’t resist saying that what I found most intriguing about the process was less the conclusion than the getting-there. The main thing that took me by surprise about the process has been how much psychological (and not purely-audio) factors colored our reactions to the speakers. My wife and I both have decent ears as well as some background in music. Though we aren’t by any means hyper-picky audiophiles, we’re both capable of some fussiness and snobbery where sound and music go. That said, it wasn’t just the sound quality of the devices that led to our final decision.

I’ll run through the speakers in the order I acquired them. 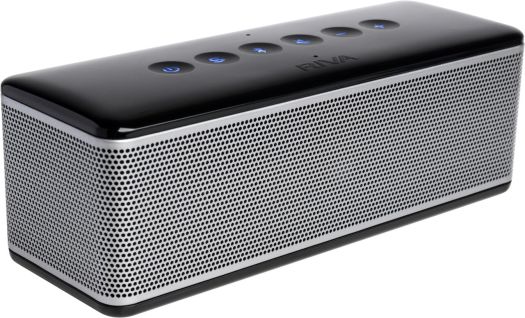 Recently released and much-touted by audiophiles, the Riva S is a dignified, Euro-seeming, silver and black minimalist box about the size of a stack of crackers. It’s such a refined and dense little package — like a tiny BMW — that even the voice that announces that the device has entered pairing mode speaks with an uppercrust English accent. Of the four speakers we tried, the $250 Riva S offered up what was unquestionably the most detailed and precise sound. The accuracy and evenness of the sound struck me as quite the virtuosic tech achievement, in fact. There was no mooshiness, boominess or shrillness; the sound was clean, distortion-free and balanced from low to high. The bass sounds weren’t thumps and booms, they were specific notes, just very low ones. The trebles never whistled or went tinny, and the mids never got sucked into a sonic morass. This isn’t sound quality, or a device, for the beer-swillin’, Beyoncé-worshippin’ masses, in other words.

Downsides: the price, which seems a little high. And a psychological one: Given that we aren’t talking about a huge, life-enveloping sound system, how much difference does an extra 5% of detail really make? Do you really want your small Bluetooth speaker to be audiophile-quality? There were a lot of moments when I found myself enjoying, say, the extra bit of color (the woody/reediness of a clarinet, for instance) that the Riva S enabled me to discern. But there were other times when the experience reminded me of hearing a really good stereo system playing a couple of rooms away. The Riva S was like a miniature version of a really great speaker system, in other words. And as a physical thing the Riva S can feel a little precious. Are these bad things or good things? At times I really didn’t know.

Incidentally, if you choose to give the Riva S a try, do give it time to break in. Where the other speakers sounded like they ultimately sounded right off the bat, the Riva S took hours to settle in. In the case of the specific device I was sent, the diff between how it sounded straight out of the box — perplexingly offbase — and how it sounded three or four hours later (refined, knitted-together and grownup) was really dramatic. 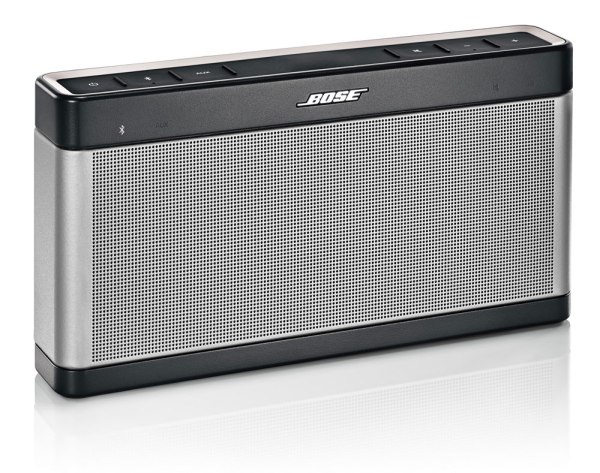 Curious about how the controversial Bose (Bose devices are always love-‘em-or-hate-‘em) would compare to the Riva S — the two of them are considered to be the high end of the small-and-portable Bluetooth-speaker genre — I picked one of these up at the Apple Store for $299. As a physical thing it’s bigger than the others — about the size of a hardback novel — but it isn’t so big that we couldn’t travel with it. And, who knew, maybe the larger size would allow it to pump out extra sound without straining.

I liked the look and feel of it. The SoundLink III conveys the same kind of silvery, high-end design-and-engineering feeling that the Riva S does. But the sound threw both my wife and me for a loop. At first we grinned at each other: happiness, achieved. We were ready to pull the trigger then and there. But as the minutes passed … Well, while there were times when we were happy with what we were hearing, there came along other, just as numerous, times when we found ourselves frowning at each other about it. It was such a now-I’m-happy/now-I’m-unhappy rollercoaster ride for both of us that, as the days went by, we found ourselves playing the Bose less and less.

I’ve never lived with a Bose device, but I’ve spent plenty of guy-time in electronics stores and I can report that all the Bose devices I’ve sampled have struck me the same way this one did. As far as I can tell, Bose engineers are big on first impressions. The sound is nearly always impressive as hell at first listen; then it turns into something that makes me feel like I’ve fallen off a cliff and lost myself in total confusion. Why is such big bass also so indistinct? Why are some of the sounds in the midrange overvivid while others seem squashed? Where are the notes? Everything seems deliberately and expertly engineered, but to what end? Given that the Bose approach doesn’t suit me much, all I can do is guess. And my guess is that the SoundLink III is applying tons of behind-the-scenes trickery in an effort to make a superdeluxe impression. In any case, my wife and I weren’t having it; we reacted to the trickery by getting confused and tuning out. Having said all that, some people are devoted to the brand. They adore the heavily-massaged Bose sound and don’t mind the high prices. Maybe you’re one of them, and if so, god bless.

After test-driving the silvery high end products I decided the time had come to explore two well-reviewed but much-cheaper speakers: Denon’s Envaya Mini and JBL’s Flip 3. First impression with both of them: Liked ’em! We found the unprentiousness and compactness of the devices approachable and friendly. And the sounds coming out of them were so straightforward and clear that the Bose went right back into its box. I kept the Riva S around as a kind of reference monitor for further comparing and contrasting.

For $150 you get a solid, heavy device that’s about the size of a big hot dog on a roll, with a look that strikes me as fun without being idiotically flashy. It’s a satisfying, unfussy thing to share a room with, as well as to grab and move around. As for the sound: of all the devices, this one pumped out the most pleasing music. The Envaya Mini isn’t the loudest of the speakers, and it can’t compare in refinement to the Riva S. But the music it delivered struck me as wonderfully warm and creamy. For once I was feelin’ the music rather than puzzling out the engineering decisions behind it. The music hangs together and flows; the device conveys more of the music’s emotion than the others do, even the Riva S. Some reviewers praise the Envaya’s “sound stage” and marvel at how such a small thing manages to create stereo effects. I found that this mattered only so long as I was within a couple of feet of the device, which, in practice, I never was.

Too bad then about its battery. The more I investigated people’s reactions to the Envaya Mini online, the more unhappiness I ran into with the battery. People love the sound but unanimously write that the battery life isn’t great, and about one out of every three consumers has encountered a genuinely bad problem, ranging from batteries that lose their entire charges in mere months to lousy customer service from Denon. Given how seductive I found the device’s sound, it caused me no little pain to return this one. But, since “simple, reliable and easy” are three of my bywords when it comes to electronic devices, back to Amazon the Envaya Mini went.

To get the bad news out of the way up front: the sound of the $99 JBL Flip 3 is goosed at the treble and bass ends. The engineers were clearly striving to force the tiny device (it’s about the size of a beer can) to project bigness. Some sounds get so picked-out and highlighted that they can seem to be detaching themselves from the rest of the music. Loud flutes and cymbals especially can get shrill. The music can fly apart and the mids can do occasional vanishing acts. You have to make the most allowances when you’re listening to 19th century orchestral stuff: deep, turbulent and murky performances do not show this device off at its best, to put things mildly.

All that said, the sound this dinky thing kicks out generally is amazingly clean, tight and clear. The device can get louder than I’ll ever want it to. It’s bright and up-front, perhaps unrelentingly so — the Flip 3 seems to be optimized for the kind of all-foreground, all-highlights music that most everyday people listen to most of the time. But its devotion to keeping sounds clear and separate delivers payoffs too, even if you don’t bother much with conventional pop. The Flip 3 delivers good results with Baroque music, country and small-ensemble jazz — with any music that’s made up of distinct lines. Though the device’s sound quality doesn’t match the delicacy of the Riva S or the smoothness of the Envaya Mini, it has more presence and more immediacy than either of them. The sound is always right there with you. (We thought the device worked best when it wasn’t placed against a wall or in a corner.) And, as a physical thing that one will handle and have in one’s life for a few years, it’s a very likable package, rugged-feeling and a snap to use. People online report good luck with the battery life — 10 hours!  — as well as ease with managing the battery. Verdict: the Flip 3 is a more populist product than the Riva S, but it’s also rugged, it’ll travel well, it’s a good enough performer and it’s cheap.

So, of the four speakers we tried out, we wound up buying and keeping the one with the third-best sound. Sound quality was important in our decision-making, but so were many other factors, including price, physical feeling, design and pretension-level. Isn’t it interesting how many elements go into what we prefer “hearing”? It is to me, anyway.

Onetime media flunky and movie buff and very glad to have left that mess behind. Formerly Michael Blowhard of the cultureblog 2Blowhards.com. Now a rootless parasite and bon vivant on a quest to find the perfectly-crafted artisanal cocktail.
View all posts by Paleo Retiree →
This entry was posted in Music, Shopping, Uncategorized and tagged Bluetooth, Music, shopping, speakers, technology. Bookmark the permalink.