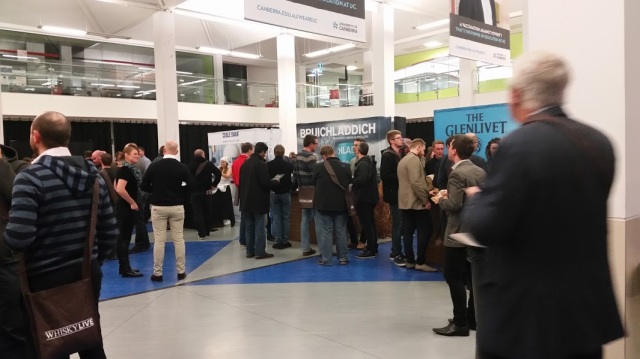 I was hesitant when I purchased my $99 tickets for Whisky Live Canberra: Would it be worth the money? I was mindful of the fiasco that was the recent Australian Barbecue Festival in Sydney and set my expectations low.

I shouldn’t have doubted WL. I was extremely and pleasantly surprised by the event, held at the University of Canberra’s Refectory on a cold night a week ago. All three sessions were sold out, and the levels of patronage ensured a lively but never overcrowded evening. The admission fee included a messenger bag, a lovely tasting glass, a guide and a pen, plus a wide variety of high-quality munchies including wings, pork sliders, tacos, wedges, prime rib sandwiches, pastries and fruit. There were about twenty stands featuring different manufacturers and distributors, with about 100 beverages available for tasting. Here are my impressions of a few of them.

Aberlour 16
With Aberlour 12 already one of my top single malt Scotches, I was excited to try the more aged expressions that are out of my budget. I was disappointed that the 16 was actually harsher and spiritier than the 12, despite being the same ABV. The signature curranty sweetness (from the sherry casks) and the cakey spiciness (from the Bourbon barrels) were still there but it had a throat-searing, grappalike astringency that disappointed.

Dry Fly Triticale Whiskey
Triticale, for those of you not up to date on your trendy grains, is a hybrid of wheat and rye. As it happens, this makes it excellent for whisky: more interest than straight wheat (which tends to cause insipidness when used to excess in whiskey: this was in fact the case with Dry Fly’s regular wheat whiskey) but not as idiosyncratic as straight rye (which can strike some palates as too harsh or peppery). I enjoyed the prickly spice notes wedded to the gentleness of the wheat, and I’d gladly drink this Washington State treat again.

The Dalmore 12
The most gorgeous nose of all the whiskeys I tasted: this had a sensational yeasty-bready aroma which seduced me. The palate had a nice mix of jelly fruits, citrus and bread, kind of like a Pannetone cake, and the finish lingered most lusciously. A pool is being collected in the Pensier household to buy a bottle of this.

This oddball spirit from Vermont is essentially moonshine that has been filtered through coffee beans. It was available in two variants: the plain clear version which had a faint coffee note and an otherwise undistinguished neutral-spirit profile, and a liqueur version, blended with brewed coffee and sugar. At 34% ABV, this could plausibly be called hillbilly Kahlua, and it would make delicious and intoxicating espresso martinis if you are inclined that way.

Glendalough “Double Barrel” Irish Whiskey
There was a fine selection of Irish whiskeys at WL, including Hyde, Connemara and Tipperary. This was the standout: aged first in Bourbon casks and then in Oloroso sherry casks, the effect combined to give a sweet creamy coffee note, in fact it was not unlike a more refined version of the Kaffekask. The finish featured mouth-filling cinnamon, allspice and a gentle but lingering heat.

Bruichladdich Octomore 7.3
Readers may recall my ecstasies on tasting Octomore for the first time. That one, I’m 90% certain, was Octomore 7.1, the second-latest release, which comes packaged in a sleek matte black bottle. This one comes in a clear frosted bottle, is produced entirely from barley grown on Islay, and tastes slightly different. The nose, while still superbly smoky and phenolic, now features a large helping of the caramelly sweetness. The Islay Barley responds less to a dash of water: it remains the same chewy, peaty whisky with butterscotch undertones whether neat or watered. It’s still amazing.

Coole Swan Irish Whisky Chocolate Cream
Served by a young lady regrettably outfitted with a pair of swan wings and glitter makeup, this was some tasty stuff. Closer to Buffalo Trace’s Bourbon Cream than the common Bailey’s, this had cocoa-butter and caramel to beat the band, and while its self-proclaimed title of “The King Of Irish Cream Liqueurs” is a bit dubious, I’d gladly add a slug of this to a coffee or a mudslide.

Jack Daniel’s Sinatra Select
The fellow at the JD stand was cheerfully pessimistic about his prospects of serving any No.7 to this sophisticated crowd. He did however do a brisk trade in Gold, Single Barrel, and this superpremium expression, named after JD’s most famous fan and licensed by his estate. The barrels for Sinatra Select are grooved to expose more of the whiskey to the flavor-enhancing wood, and it does work, giving SS a polished-furniture aroma, a toasty smooth smokiness, and enough of a burn on the finish to remind you that you’re still drinking Jack. I don’t know that I’d pay $230 for a bottle, but it was a pleasure to sample.

The only Australian exhibitor at WL, Starward hails from the distinctly unglamorous Melbourne suburb of Essendon, rather than the more picturesque Tasmanian origins of the posher and better-known drops. The Wine Cask Edition was slightly harsh and muddled, with a clove-heavy spiciness on the palate. I much preferred the gentler balance of the Solera (their “regular” expression) which had a lovely trail-mix aroma of bananas and raisins with a sweetly grainy finish.

Paul John Edited, Bold, and Select Cask Peated
The standout of the show was this range of Goan whiskies, the first premium range from John Distilleries which makes a wide range of mass-market spirits in India. They had all five whiskies available for tasting. They were all at the least very good, but these three were the ones that had my jaw dropping with the magnificence and sureness of their craft. Edited was a medium-bodied tipple that had a minty and grassy aroma, a fruit-salad palate and a buttery-smooth finish. The Bold and Select Cask Peated would make the most dedicated Islay peat chauvinists weep: mouth-coating phenol and iodine against a backdrop of charred woods and cocoa, with the Bold a smidge sweeter and more honeylike.

I strongly urge all readers to check when the Whisky Live is coming to your city. It’s a sensory treat and a learning experience.