‘Tis Their Scalps or Ours 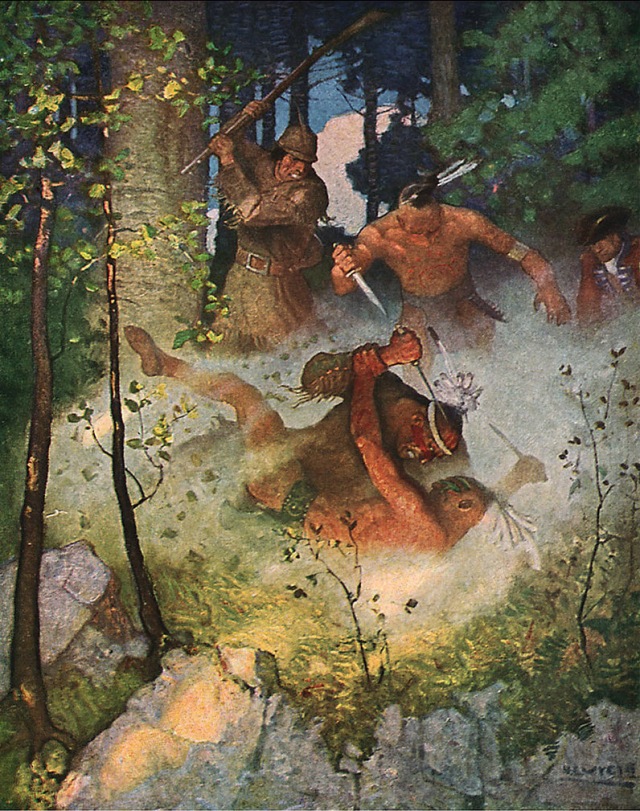 The warrior in the oak had maintained a quick, though ineffectual fire, from the moment of his discovery. But his aim was interrupted by the vigilance of his enemies, whose rifles instantaneously bore on any part of his person that was left exposed. Still his bullets fell in the center of the crouching party. The clothes of Heyward, which rendered him peculiarly conspicuous, were repeatedly cut, and once blood was drawn from a slight wound in his arm.

At length, emboldened by the long and patient watchfulness of his enemies, the Huron attempted a better and more fatal aim. The quick eyes of the Mohicans caught the dark line of his lower limbs incautiously exposed through the thin foliage, a few inches from the trunk of the tree. Their rifles made a common report, when, sinking on his wounded limb, part of the body of the savage came into view. Swift as thought, Hawkeye seized the advantage, and discharged his fatal weapon into the top of the oak. The leaves were unusually agitated; the dangerous rifle fell from its commanding elevation, and after a few moments of vain struggling, the form of the savage was seen swinging in the wind, while he still grasped a ragged and naked branch of the tree with his hands clenched in desperation.

“Give him, in pity, give him the contents of another rifle,” cried Duncan, turning away his eyes in horror from the spectacle of a fellow creature in such awful jeopardy.

“Not a karnel!” exclaimed the obdurate Hawkyeye; “his death is certain, and we have no powder to spare, for Indian fights sometimes last for days; ’tis their scalps or ours! and God, who made us, has put into our natures the craving to keep the skin on the head.”

Against this stern and unyielding morality, supported as it was by such visible policy, there was no appeal. From that moment the yells in the forest once more ceased, the fire was suffered to decline, and all eyes, those of friends as well as enemies, became fixed on the hopeless condition of the wretch who was dangling between heaven and earth. The body yielded to the currents of air, and though no murmur or groan escaped the victim, there were instants when he grimly faced his foes, and the anguish of cold despair might be traced, through the intervening distance, in possession of his swarthy lineaments. Three several times the scout raised his piece in mercy, and as often, prudence getting the better of his intention, it was again silently lowered. At length one hand of the Huron lost its hold, and dropped exhausted to his side. A desperate and fruitless struggle to recover the branch succeeded, and then the savage was seen for a fleeting instant, grasping wildly at the empty air. The lightning is not quicker than was the flame from the rifle of Hawkeye; the limbs of the victim trembled and contracted, the head fell to the bosom, and the body parted the foaming waters like lead, when the element closed above it, in its ceaseless velocity, and every vestige of the unhappy Huron was lost forever.

No shout of triumph succeeded this important advantage, but even the Mohicans gazed at each other in silent horror. A single yell burst from the woods, and all was again still. Hawkeye, who alone appeared to reason on the occasion, shook his head at his own momentary weakness, even uttering his self-disapprobation aloud.

“‘Twas the last charge in my horn and the last bullet in my pouch, and ’twas the act of a boy!” he said; “what mattered whether he struck the rock living or dead! feeling would soon be over. Uncas, lad, go down to the canoe, and bring up the big horn; it is all the powder we have left, and we shall need it to the last grain, or I am ignorant of the Mingo nature.”