The Dream Without a Meaning 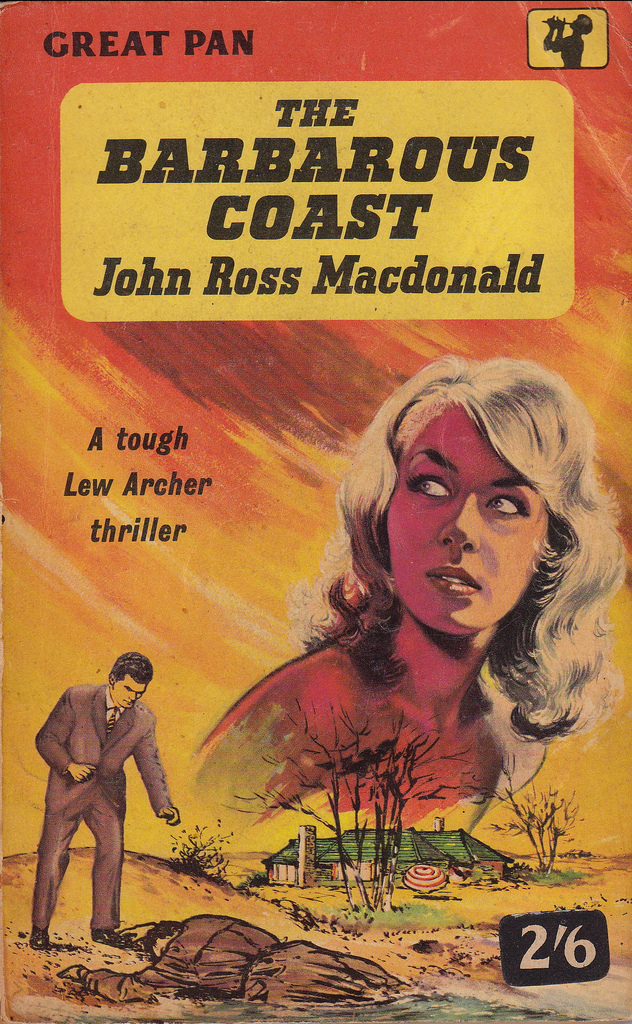 Time began to tick again, in fits and starts. Pain glowed in my mind like lightning in a cloud, expanding and contracting with my heartbeat. I lay on my back on a hard surface. Somewhere above me, Lance Leonard said through flutter and wow:

“This is a neat layout Carlie’s got himself here. I been out here plenty of times. He gives me the run of the place. I get the use of it any time he’s away. It’s swell for dames.”

“I was just explaining.” Leonard’s voice was aggrieved.

“I know this place like I know the back of my hand. Anything you want, any kind of booze or wine, I can get it for you.”

Leonard subsided. I lay in the unblessed silence for a while. Sunlight was hot on my skin and red through my eyelids. I had turned up my eyes.

“Throw some water on him. There’s a hose on the other side of the pool.”

I waited, and felt its stream gush into my face, hot from the sun, then lukewarm. I let a little of the water run into my dry mouth.

“Still out,” Leonard said glumly. “What if he don’t wake up? What do we do then?”

“That’s your friend Stern’s problem. He will, though. He’s a hardhead, bone all the way through. I almost wish he wouldn’t.”

“Carlie ought to been here long ago. You think his plane crashed?”

“Yah, I think his plane crashed. Which makes you a goddamn orphan.” There was a rattlesnake buzz in Frost’s voice.

“You’re stringing me, ain’t you? Aren’t you?” Leonard was dismayed.

Frost failed to answer him. There was another silence. I kept my eyes shut, and sent a couple of messages down the red-lit avenues behind them. The first one took a long time  getting there, but when it arrived it flexed the fingers of my right hand. I willed my toes to wiggle, and they wiggled. It was very encouraging.

A telephone rang behind a wall.

“Don’t answer it. We’ll sit here and guess who it is.”

“You don’t have to get sarcastic. Flake can answer it. He’s in there watching television.”

“It’s Stern. He’s in Victorville, wants to be picked up.”

“Is he still on the line? Leonard asked.

Footsteps receded. I opened my eyes, looked up into glaring blue sky in which the declining sun hung like an inverted hot-plate. I raised my pulsating head, a little at a time. A winking oval pool was surrounded on three sides by a Fiberglas fence, on the fourth side by the glass wall of an adobe-colored desert house. Between me and the pool, Frost sat lax in a long aluminum chair under a blue patio umbrella. He was half-turned away from me, listening to a murmur of words from the house. An automatic hung from his limp right hand.

I sat up slowly, leaning my weight on my arms. My vision had a tendency to blur. I focused on Frost’s neck. It looked like a scrawny plucked rooster’s, easy to wring. I gathered my legs under me. They were hard to control, and one shoe scraped the concrete.

Frost heard the little sound it made. His eyes swiveled toward me. His gun came up. I crawled toward him anyway, dripping reddish water. He scrambled out of the long chair and backed toward the house.

Twistyface appeared in the opening of the wall. I wasn’t thinking well, and my movements were sluggish. I got up, made a staggering lunge for Frost, and fell short, onto my knees. He aimed a kick at my head, which I was too slow to avoid. The sky broke up in lights. Something else hit me, and the sky turned black.

I swung in black space, supported by some kind of sky hook above the bright scene. I could look down and see everything very clearly. Frost and Leonard and Twistyface stood over a prostrate man, palavering in doubletalk. At least, it sounded like doubletalk to me. I was occupied with deep thoughts of my own. They flashed on my mind like brilliant lantern slides: Hollywood started as a meaningless dream, invented for money. But its colors ran, out through the holes in people’s heads, spread across the landscape and solidified. North and south along the coast, east across the desert, across the continent. Now we were stuck with the dream without a meaning. It had become the nightmare we lived in. Deep thoughts.

I realized with some embarrassment that the body on the deck belonged to me. I climbed air down to it and crawled back in, a rat who lived in a scarecrow. It was familiar, even cozy, except for the leaks. But something had happened to me. I was hallucinating a little bit, and self-pity opened up in front of me like a blue, inviting pool where a man could drown. I dove in. I swam to the other side, though. There were barracuda in the pool, hungry for my manhood. I climbed out.

Came to my senses and saw I hadn’t moved. Frost and Leonard had gone away. Twistyface sat in the aluminum chair and watched me sit up. He was naked to the waist. Black fur made tufted patterns on his torso. He had breasts like a female gorilla. The inevitable gun was in his paw.

“That’s better,” he said. “I don’t know about you, but ole Flake feels like going in and watching some TV. It’s hotter than the hinges out here.”

It was like walking on stilts, but I made it inside, across a large, low room, into a smaller room. This was paneled in dark wood and dominated by the great blind eye of a television set. Flake pointed with his gun at the leather armchair beside it.

“You sit there. Get me a Western movie.”

“There’s always a Western movie at this time of day.”

He was right. I sat for what seemed a long time and listened to the clop-clop and bang-bang. Flake sat close up in front of the screen, fascinated by simple virtue conquering simple evil with fists and guns and rustic philosophy. The old plot repeated itself like a moron’s recurrent wish-fulfillment dream. The pitchman in the intervals worked hard to build up new little mechanical wishes. Colonel Risko says buy Bloaties, they’re yum-yum delicious, yum-yum nutritious. Get your super-secret badge of membership. You’ll ell-oh-vee-ee Bloaties.

I flexed my arms and legs from time to time and tried to generate willpower. There was a brass lamp on the top of the television set. It had a thick base, and looked heavy enough to be used as a weapon. If I could find the will to use it, and if Flake would forget his gun for two consecutive seconds.

The movie ended in a chaste embrace which brought tears to Flake’s eyes. Or else his eyes were watering from eyestrain. The gun sagged between his spread knees. I rose and got hold of the lamp. It wasn’t as heavy as it looked. I hit him on the head with it anyway.

Flake merely looked surprised. He fired in reflex. The pitchman on the television screen exploded in the middle of a deathless sentence. In a hail of glass I kicked at the gun in Flake’s hand. It hopped through the air, struck the wall, and went off again. Flake lowered his little dented head and charged me.

I sidestepped. His wild fist cracked a panel in the wall. Before he recovered his balance, I got a half-nelson on him and then a full nelson.

He was a hard man to bend. I bent him, and rapped his head on the edge of the television box. He lunged sideways, dragging me across the room. I retained my hold, clenched hands at the back of his neck. I rapped his head on the steel corner of an air-conditioning unit set in the window. He went soft, and I dropped him.

I got down on my knees and found the gun and had a hard time getting up again. I was weak and trembling. Flake was worse off, snoring through a broken nose.

I found my way to the kitchen and had a drink of water and went outside. It was already evening. There were no cars in the carport, just a flat-tired English bicycle and a motor scooter that wouldn’t start. Not for me it wouldn’t. I thought of waiting there for Frost and Leonard and Stern, but all I could think of to do with them was shoot them. I was sick and tired of violence. One more piece of violence and they could reserve my room at Camarillo, in one of the back wards. Or such was my opinion at the time.

I started down the dusty private road. It descended a low rise toward the bed of a dry stream in the middle of a wide, flat valley. There were mountain ranges on two sides of the valley, high in the south and medium high in the west. On the slopes of the southern range, drifts of snow gleamed impossibly white between the deep-blue forests. The western range was jagged black against a sky where the last light was breaking up into all its colors.

2 Responses to The Dream Without a Meaning